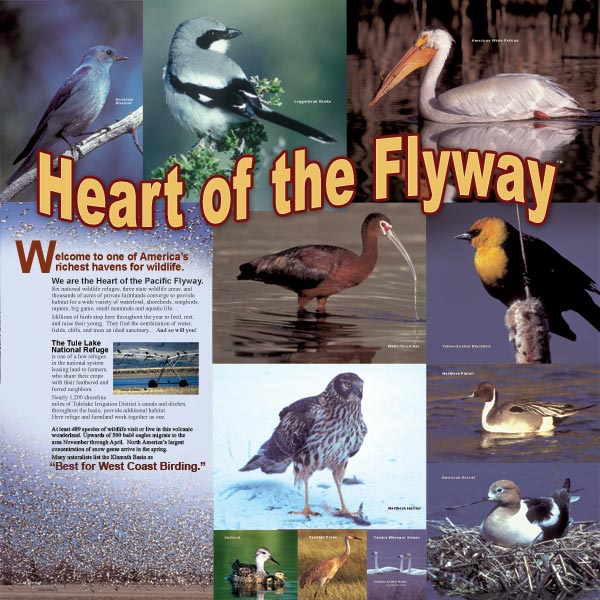 Almost 500 species visit or live these refuge-agricultural lands.
Tule Lake Basin is an important stopover for the Pacific Flyway. Four national wildlife refuges, and thousands of acres of private farmlands converge to provide habitat for a wide variety of waterfowl, shorebirds, songbirds, raptors, big game, small mammals and aquatic life. At least 489 species of wildlife visit or live in this volcanic wonderland. Upwards of 500 bald eagles migrate to the area November through April. North America’s largest concentration of snow geese arrive in the spring.

Riparian Habitat is located along the shoreline of rivers, lakes and wetlands within the Upper Klamath Basin watershed. Vegetation found in riparian habitats includes deciduous trees such as willow, cottonwood and aspen which are found along the shore lines of these water bodies. Many bird species use riparian habitats as travel corridors during the spring and fall migrations. Other birds may use riparian locations as favored sites for nesting and breeding.

Abundant shallow wetlands are found in the Upper Klamath and Tule Lake Basins. These wetlands have historically had water during the winter and spring, but tended to dry out during the summer and fall. Today, most wildlife areas and
refuges manage seasonal wetlands using water control structures to mimic this yearly wet and dry cycle. Wading shorebirds and dabbing ducks are among the diverse wildlife species commonly seen in seasonal marshes and wetlands.

More habitats will be added over the coming days.