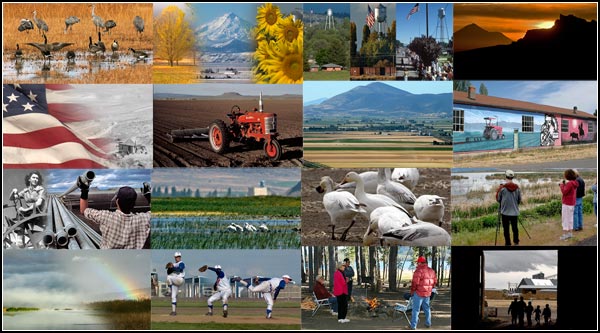 Welcome to the Tule Lake Basin – home to Tulelake and Newell, California as well
as Merrill and Malin, Oregon. This is fertile farmland and abundant wildlife refuge.
It is history – including the Applegate Trail, Modoc Indian War, Klamath Reclamation
Project, Tule Lake Internment – Segregation Center and the 2001 water-shutoff. It is
the Lava Beds National Monument, surrounding ridges and the Medicine Lake Highlands.
It is the smell of sage and mint under big skies and the Milky Way. Explore! Enjoy!

Farmland and Refuge Working Together as One
The video pan above, north to south, looks east from the top of Sheepy Ridge
in late summer. At the start, one is looking north along Sheepy Ridge towards
Merrill, Oregon. U.S. Fish and Wildlife Headquarters is below. The pan takes
in Malin, Oregon, and Tulelake, California, Tule Lake National Wildlife Refuge
and Tule Lake are seen along with Horse Mountain and The Peninsula (aka Castle
Rock). Newell, California, the former site of the Tule Lake Internment –
Segregation Center, is across the basin to the east. The pan ends looking south
along Sheepy Ridge towards the Lava Beds National Monument and Medicine Lake
Highlands. This pan includes portions of Klamath County, Oregon along with Modoc
and Siskiyou County, California.

Millions of visitors come each year to a land of harvests and growing families.
Tulelake, Tule Lake, Tule Lake Basin… You say potato, I say grebe, they say lava tubes, you say coyote, I say horseradish,

they say petroglyphs, you say harriers, I say cattle, we say Applegate trail, you say pelicans, I say grain, they say Modoc Indian War, you say mint, I say osprey, they say Klamath Reclamation Project, I say county fair, you say Homesteaders, we say hunting, you say antelope, I say alfalfa, you say sagebrush, they say Volcanic Legacy All-American Road and on, and on, and on…
Here is the nature of a reclaimed lake bed used by farmers, wildlife and nature enthusiasts. This land is alive. The basin is surrounded by geographical features: volcanos, fault blocks, lava flows and big sky vistas. Migratory waterfowl and raptures seasonally visit year round. Farmers start preparing fields in March and harvest as late as November.

Delivering water to soil that was once a lake bed.
Tule Lake Basin is crisscrossed by Tulelake Irrigation District’s 600 miles of canals- that’s 1,200 miles of shoreline. Water is moved back and forth from farm fields to drains, back to farms, or the lake or U.S. Fish and Wildlife projects. Today, the amount of water used in a year could be less

than what naturally evaporated from old Tule Lake. Seasons dance under passing clouds and deep blue skies. A year in this life is a story of survival.
A modern relationship between man and migrating waterfowl.
I have had people tell me that they have been told them that Tule Lake National Wildlife Refuge is too geometric with all the efficient rectangular farm fields and irrigation canals, everywhere there are right angles, so unnatural for wildlife. I laugh. I wonder where those people live. The chances are their homes were built on land that was once wildlife habitat and the land was graded and plated into grids. And in Southern California the lush landscaping is only possible with borrowed water from hundreds of miles away. How can these folks look at wildlife thriving in Tule Lake Basin and say their Tule lifestyle is unbecoming?

There are few habitats left that migrating waterfowl can use. Places like Tule Lake basin are all that these migrations have. Wildlife use Tulelake refuge and farmland to survive. Man does what man does.
The springs of 2007 and 2008 in the Upper Klamath Basin were wet. Relatively undeveloped refuge such as Upper Klamath Lake and Klamath Marsh National Wildlife Refuges had so much water there was no where for birds to put nests. Nests were being built on canal fed Tule and Lower National Wildlife Refuges. Man’s ability to manage water levels provided wildlife with safe nesting areas. Free flowing nature can be a killer, as well as a provider. Despite man’s researched predictions, whatever the research intentions may be, the world doesn’t always follow projected mathematical models. The story of Tulelake is both ancient and modern. It is a story of accommodation and cooperation. One needs to visit, linger, listen and watch with willing and open eyes. The future of man and wildlife plays out before you. 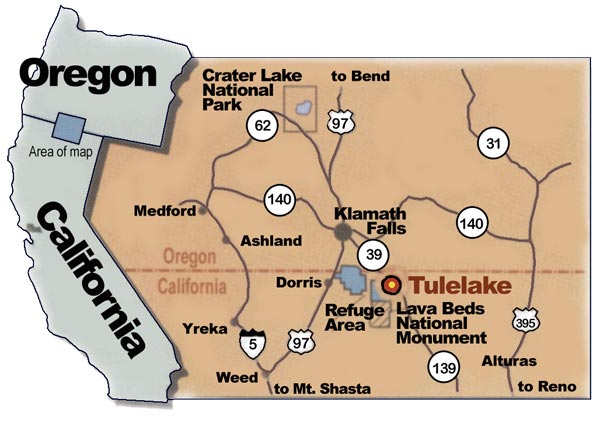 Tule Lake Basin is at the southern end of Upper Klamath Basin: Crater Lake to the Lava Beds.