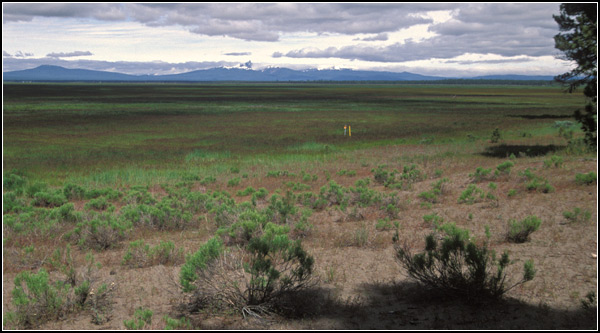 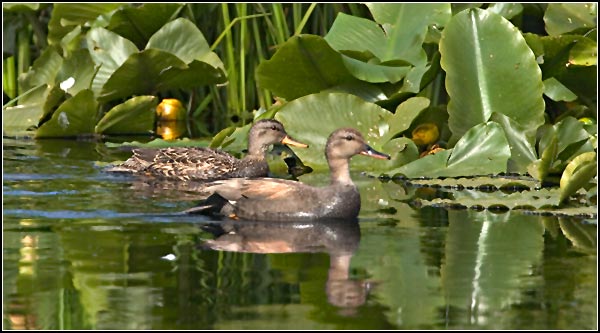 Nesting, feeding, and staging habitat for waterfowl and sandhill crane.
One of the four primary objectives of the refuge is to provide high quality,
wildlife-dependent visitor services with emphasis on environmental education,
interpretive, hunting, fishing, and wildlife observation opportunities.
The Klamath Marsh National Wildlife Refuge was established in 1958
“… as an inviolate sanctuary, or for any other management purpose, for migratory birds.” 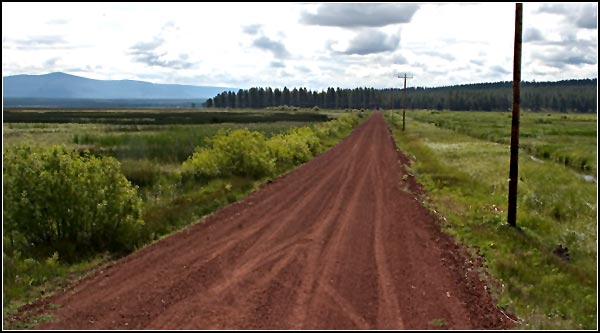 An old road that connects “then” with “now” and heads into the “future.”
A red cinder road, Military Crossing, connects Silver Lake Highway to Highway 97.
This road was constructed in 1868 by the Oregon Central Wagon Road Company for
the State of Oregon as part of a route between Eugene, Oregon and Boise, Idaho.
Here, Military Crossing cuts across the refuge and provides excellent
views of marsh life and sounds. 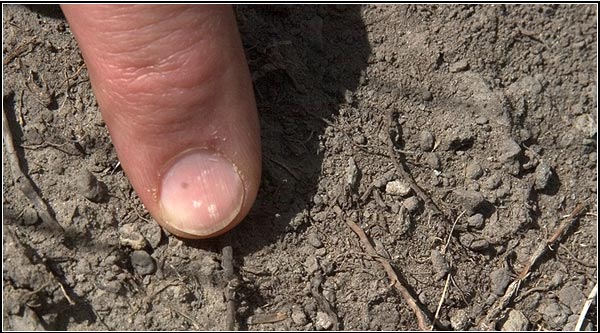 It is always a question of balance.
The cyclic grasshopper infestation is creating tension between neighboring ranches
and environmentalists. Here, a young grasshopper is being pointed out. They are
not easy to see. Everyone will be looking at this year’s grasshopper numbers
with interest . Will this spring’s rains effect the hatch? This photo
was taken June 10, 2005. 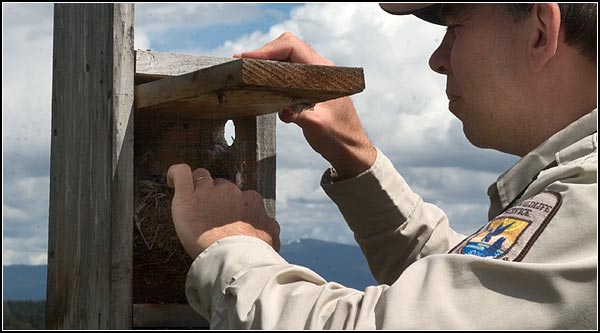 Providing wetland food and habitat.
Walt Ford, refuge manager in 2005, inspects a nest on the northern end of the 40,960
acre refuge. He uses haying and grazing, controlled fires, water management and
machines to open water channels. The goal for all Klamath Marsh mangers is to improve
water flow, create nesting islands and potholes, promote fast-growing high protein
for wildlife, add nutrients to the soil and open up dense marsh for nesting waterfowl. 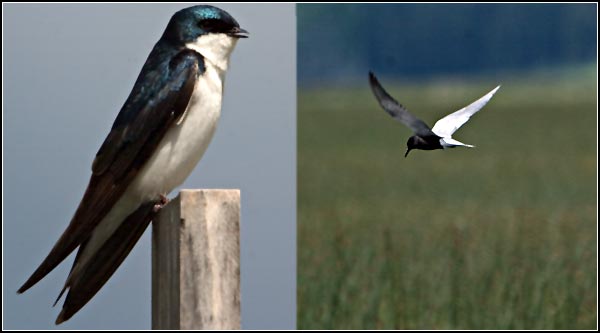 Tree swallows and Black terns do what comes naturally.
On the left is a Tree. They will return to their summer nests to feed their young 10
to 20 times an hour. Klamath Marsh is home to a large population of graceful black terns,
on the right above. They pluck insects from the air and tall grass, fish, water surface
insects, and small amphibians, earthworms, spiders, small crustaceans and
leeches. This is a well-rounded diet. 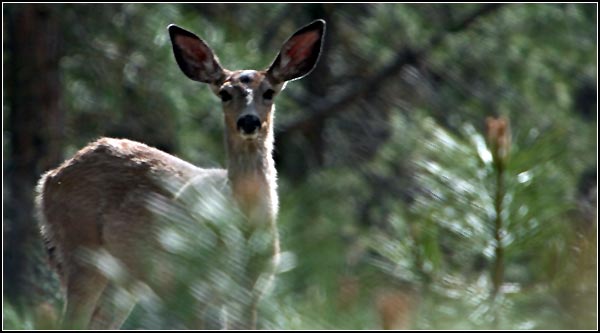 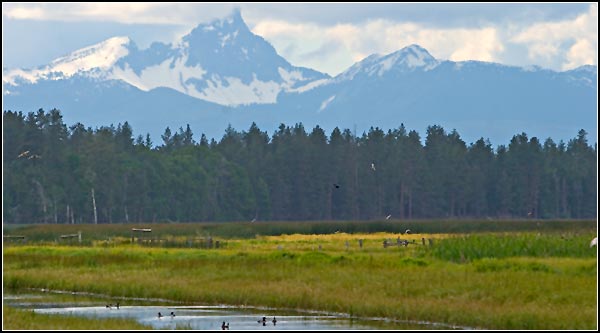 Meadows and open water along the Ring of Fire.
Stunning views of the Cascade Mountain Range, to the west running north and south,
can be found from many refuge vantage points. Here 9,184 ft. Mt. Thielsen touches the sky, it spire is called the “Lightening Rod of the Cascades.”
This volcano has been eroded by glaciers after eruptive activity ceased 250,000 years ago. 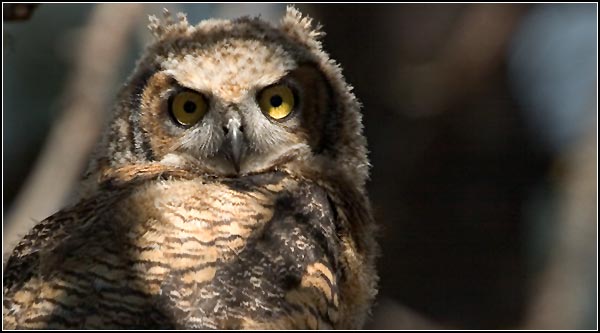 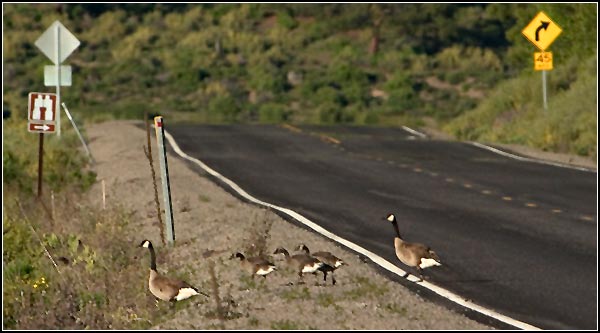 A family outing crosses from “here” to “there” outback.
Bisecting the refuge east to west is the Silver Lake highway which is constructed on an
old railroad grade built in 1929 by the Lamm Lumber Company for logging purposes.
After the Lamm Mill closed in 1944 and the railroad tracks were removed, the grade
began to be used as a road. It was paved in the 1960’s. 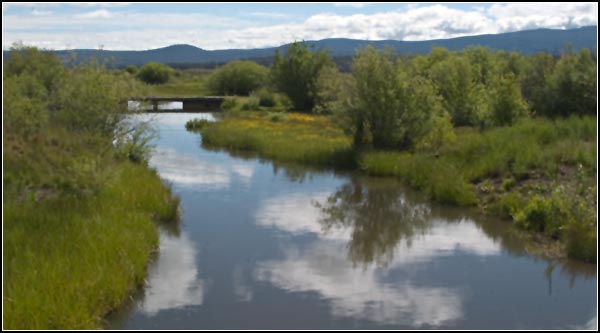 It takes a river to bring the water.
The primary source of surface water is the upper reaches of the Williamson River
which enters the refuge via two natural channels. Water flows out of these channels
into large sheets of water that move north and south across the refuge. It rechannels
just north of Military Crossing before again spreading out as a sheet feeding wetlands.
It reforms as a channel and exits the southwest corner of the refuge near Wocus Bay. 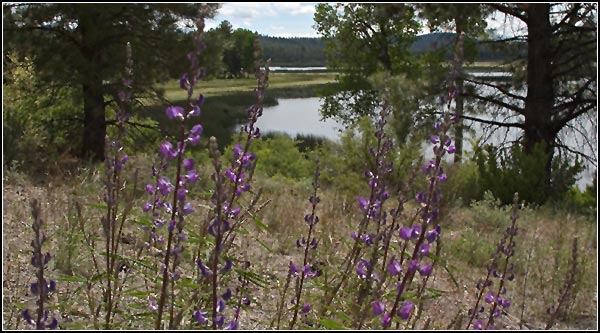 Where ponderosa and lodgepole pine meets shallow marsh.
Wocus Bay, with its deeper, more open water serves as an important brooding and
molting area for waterfowl. During good water years this area, with excellent interspersion
of open water and vegetation supports most of the waterfowl broods which hatch
from nests on other areas of the South Marsh. Edge between forest and marsh are
important to elk and deer because there is food in the marsh and the forest provides
protection. Canoeing is allowed July through September, water depth allowing. This
refuge has a rich cultural heritage, as it includes Klamath Tribes historic lands.