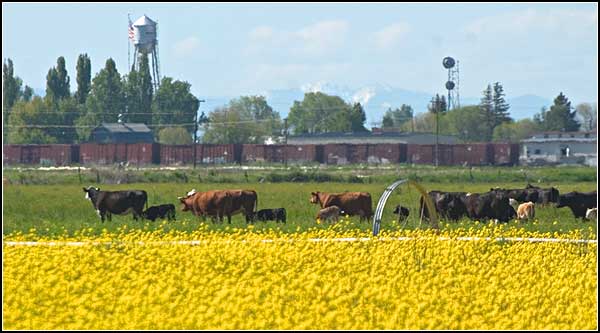 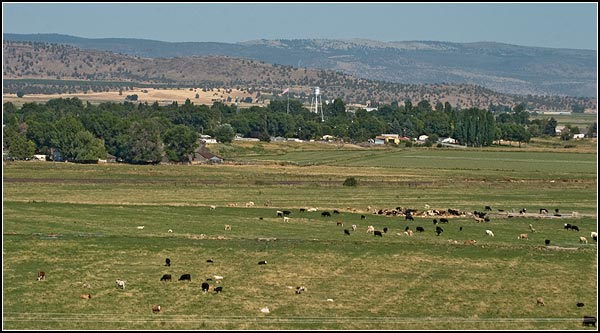 Merrill seen from the top of a hill to the west
In the foreground, where the cows are grazing, is land that benefited from one of
the first irrigation projects in the basin. The Van Brimmer brothers began digging
a canal in 1882 from the Lower Klamath Basin, behind the camera-person, to the
Tule Lake Basin. In 1886 their irrigation project began supplying 4,000 acres with water.
They recouped construction and expenses by charging grateful users $1 per acre
on the west and south side of the Lost River. 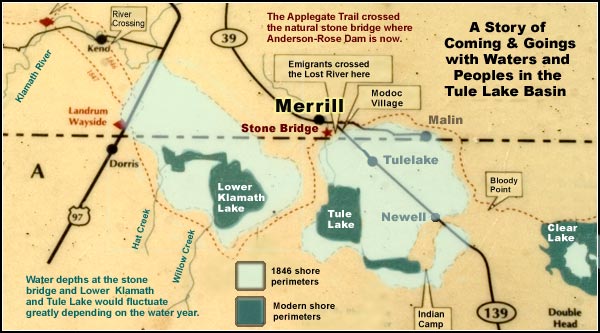 An Indian Village was on the Lost River just south of Present Day Merrill
The famous Modoc Indian leader Captain Jack returned in 1865, after a years’
forced absence by a federal agreement struck with four Indian Tribes, to his family
village site on Lost River. In 1869 life would change for the Indians and
settlers in Tule Lake Basin. There were war clouds on the horizon. 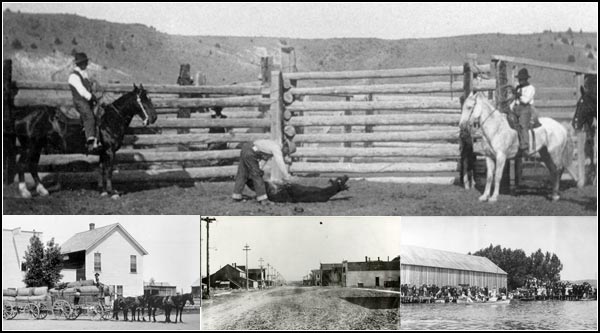 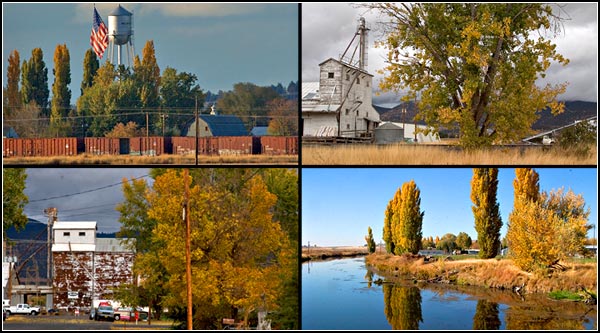 Fall is a lovely time with trees changing color and Lost River turning a bend
Namesake rancher Nathan S. Merrill bought 152 acres for $3,000 from J. Frank Adams
in 1891. Adams had bought the land from the Van Brimmers two years earlier.
Nathan and Nancy Merrill “dedicated the streets and avenues of Merrill for use of
the public forever,” as recorded at the Klamath County Court House on May 28,
1894. The original townsite was 80 acres. Antone Castel, hired by the Merrills,
created plans for a town with two business thoroughfares, residential streets
along with school and park sites. Merrill financed Thomas Martin to build a
flour mill which opened for business was established in August, 1894. A post
office was established in 1896. Merrill was incorporated into Klamath County in 1903.
A successful water well was drilled in 1905. Merrill was on the map. 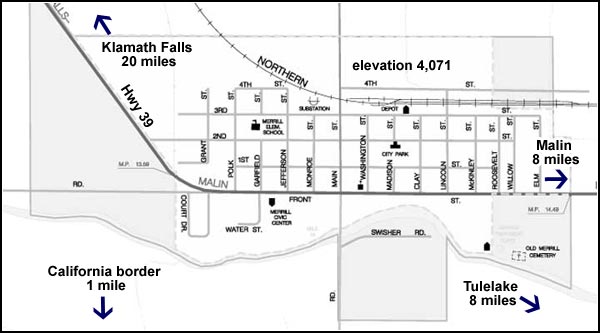 The population of Merrill was 844 people in 2010
By 1909 Merrill was second only to Klamath Falls in population with 300 people. Wheat had
been the principal crop in the Tule Lake Basin and Merrill was now known as “Flour City.
Besides the flour mill, Merrill had electricity, two hotels, school, bank, creamery, shingle mill,
three churches, the Merrill-Weekly Record and hopes of growing to 1,000 residents. 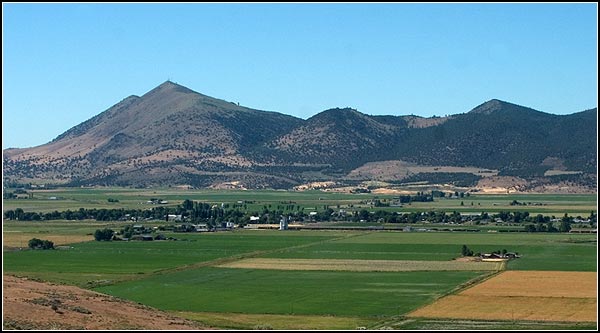 Stukel Mountain rises up to the north of Merrill
Today, Merrill is a small town with tree-lined streets. Many second and third generation
families live here. Some work in Klamath Falls and call Merrill home. It wasn’t always so
peaceful: fires in 1911, 1920 and 1921 did major damage to downtown’s business districts.
Each time Merrill rebuilt – it was the town that could. In 1912 cinders, brought from
the Lava Beds by boat, covered the dirt roads. Tule Lake’s federal reclamation project,
had begun and there was room for more settlers. 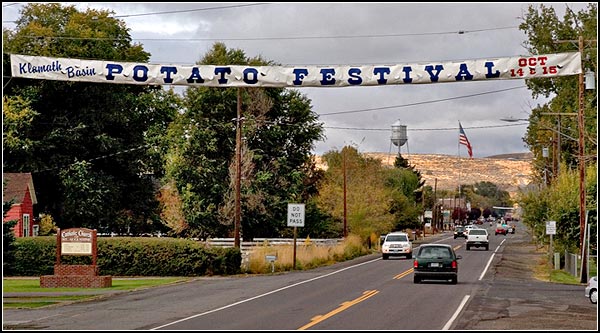 The Merrill Rotary Club has sponsored the Potato festival since 1947
As one drives through town it is hard to miss the 30′ by 50′ American flag next to the
water tower. Late in October the town’s biggest celebration is held, the annual Potato Festival
which started in 1934 to celebrate the end of the harvest and farming life in general.
A parade, dances, free BBQ, exhibits and a queen coronation make for a lively weekend. 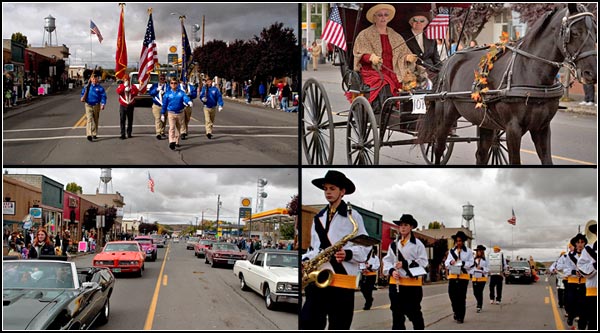 Who doesn’t enjoy a parade?
If all is normal, the nights will be cool and crisp when the Potato festival gets
underway in middle October and farmers will be in their fields harvesting potatoes.
The farmers will make the time to visit the festival but the harvest beckons.
Meanwhile their families and communities will spend weeks making sure the festival
is representative of Tule Lake Basin and Klamath County agriculture. the two day
festival includes high school and pop warner football games, car shows, marching
bands, horseshoe tournament, dunk tank, talent show, exhibits, judging, vendors,
live entertainment and country family fun for all. 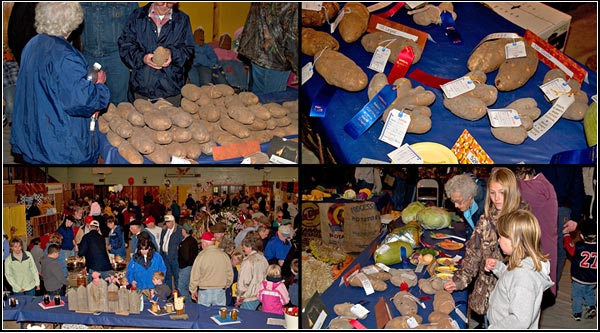 Potatoes, Potatoes, Make a Potato Festival Go Round and Round
2001 was a year from hell. The Klamath Reclamation Project’s irrigation water
was turned off by the Federal government. There was a drought and several species
were pitted against each other by-and-with Endangered Species Act’s struggle with
natural resource management. There was concern if it was right to even have a
Potato Festival in light of current events. A consensus determined there would
be a festival but it would be called the Farmer’s Festival. The Potato Festival
returned in 2002 at the same time the National Academy of Science determined that
the shutoff was unwarranted. Then was then, and now is time to enjoy the moment. 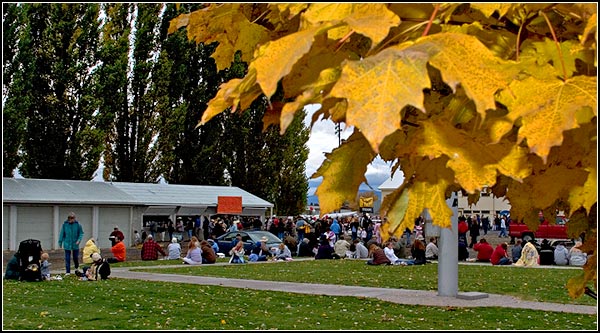 Who Says There is No Such Thing As A Free Lunch?
A large crowd lines up for a free barbecue after the parade is finished.
Donations help the Lions Club assist the community. 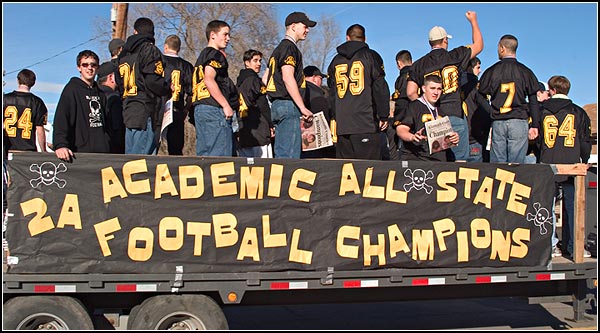 The greatest harvest farmland produces is its children
Lost River High School serves both Merrill and Malin, eight miles to the east. In 2004,
20 boys out of a graduating senior class of 56 played football and helped Lost River
win the 2004 State Class 2A championship. The team had a grade-point average of 3.34.
Also, a girl was accepted by Stanford University. Academics count in rural America. 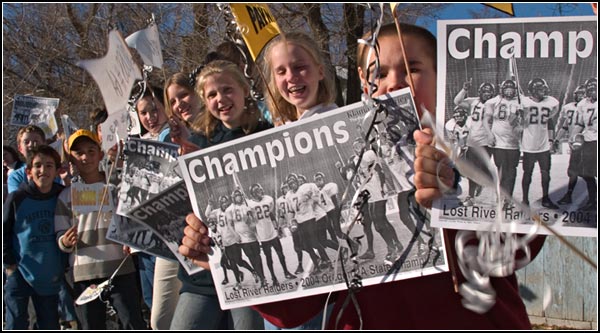 Elementary kids turn out to celebrate their champions
In 1895 Merrill had its own 20′ by 40′ school house. The Merrill School District had 56
students in 1904, 13 of whom were on the honor roll. The brick elementary school, built in
1911 served grades 1 -12 for many years, burned down in 1949. Merrill elementary
students went to the high school until their school was rebuilt and opened in early 1951.
Much of life in Merrill is centered around the children. 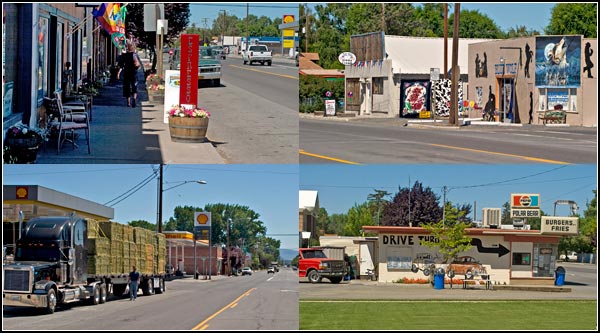 Oregon Route 39 Transitions Into California Highway 139
Business in Merrill was alive and well in the 1950’s. Residents visited their
local stores. Main Street was bustling with commerce. Life would change in
the 1960’s. Larger stores in Klamath Falls, 20 miles to the north offered
more products and less expensive prices. America was in love with their cars
and thought nothing of driving twenty miles to buy a pair of shoes. Folks
still lived in Merrill but now much of their business was done in Klamath Falls. 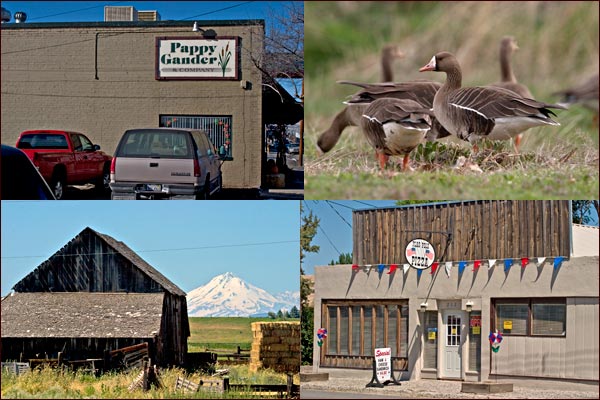 Places To Eat For One And All With Views
Looking back to 1906. A Klamath Republican reporter wrote this about Merrill.
“Merrill now has two general merchandise stores stocked with everything the citizen
can wish for his home, one furniture store where the home can be furnished from
top to bottom at prices that compare favorably with those of the metropolitan
cities, three well equipped hotels doing an excellent business – so much so that
they are not sufficient for the needs of the town an up-to-date restaurant building
is now being fitted up with lodging rooms in connection, two cigar and
confectionery stores, two blacksmith shops, one drug store, one butcher shop, the
only creamery in the county, two livery barns and a big feed barn under course
of construction, four saloons, bank, doctor, newspaper, very large and fine opera
house, harness shop, shoe repair shop, millinery store, flouring mill of fifty
barrel daily capacity, a real estate firm and is represented by most of the
leading fraternal societies as well as churches. A large capacity brick yard
was recently established and a large brick bank building is to be constructed.” 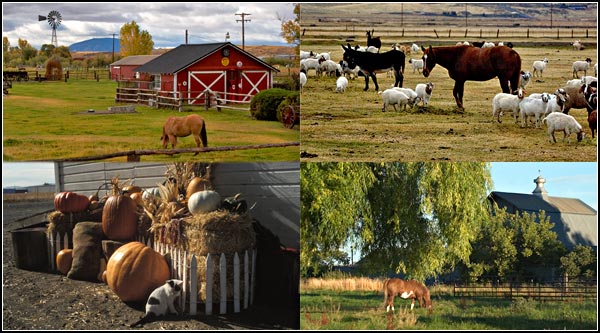 Merrill Wears It’s Age Well
The world has changed since Nathan and Nancy Merrill decided to build a town on
land they purchased at the northwest corner of Tule Lake Basin. One would think
they would be proud that Merrill still exists. What they would think of modern
world may be something different: they came from the land – today comes from the
media. Life hasn’t changed much for the cattle, sheep, horses, dogs, cats,
chickens and wildlife. Where there is water there is life. Merrill is more
a neighborhood than a town. Here, most everyone knows your name. 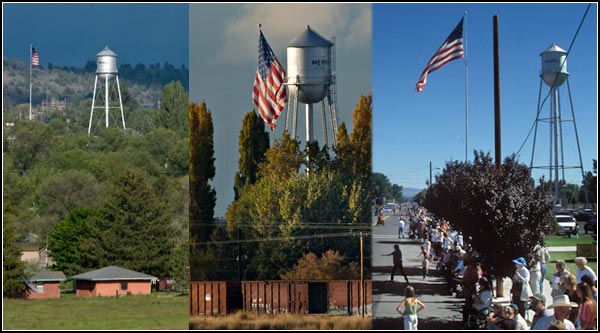 As Goes Rural America So Will Go The United States
It was not that long ago that most Americans were living off the land and
there was always a new frontier to settle when life became crowded.
And then, due to multiple causations, farm folks, especially the children,
started heading to the cities as the frontiers closed and viable homesteading
land, with water and workable soil, became scarce. There are reminders
of the old ways in places like the Tule Lake Basin. Merrill is one of
those towns where life is more like the old days than it is in modern cities
and suburbs. America needs Merrill, Oregon – the little town that could.

Upper Klamath Basin history timelines looks at volcanic landscapes rich in history. The story begins 350,000,000 B.C.E ago and continues on with its first human inhabitants, or the abundant range of flora and fauna that have existed here. The timelines continue into recent times including the 2001 Klamath Reclamation Project’s water shutoff.

Photos for this page were taken in 2004.