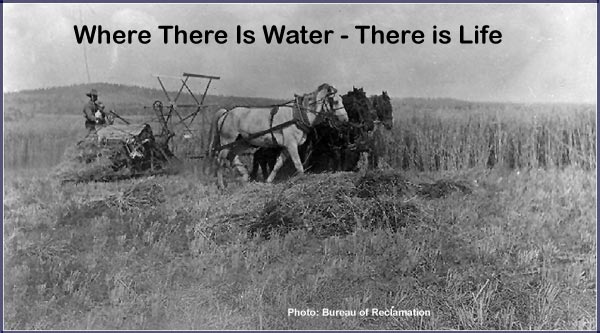 How it all began – Private water projects began in 1868. A small irrigation ditch was dug near Linkville, and by 1884 it had been widened and extended for 15 miles, irrigating 16,000 acres. Water power for early saw mills and grain mills started in 1869. 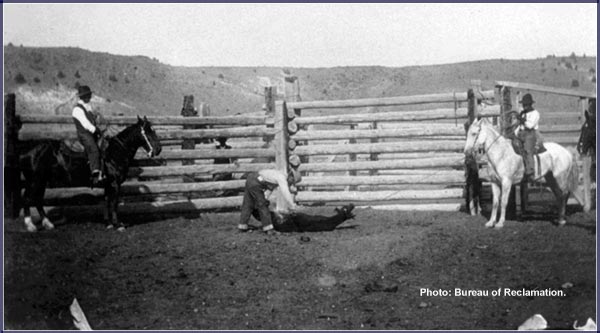 1902… The Reclamation Act – The population of Klamath Falls, then called Linkville, was 447 in 1900. Congress enacted the Reclamation Act of 1902, which encouraged the settlement of the arid western states with the use of water for irrigation and power development.Today, Klamath Falls has the largest population in the entire Klamath River watershed by a factor of nearly ten. 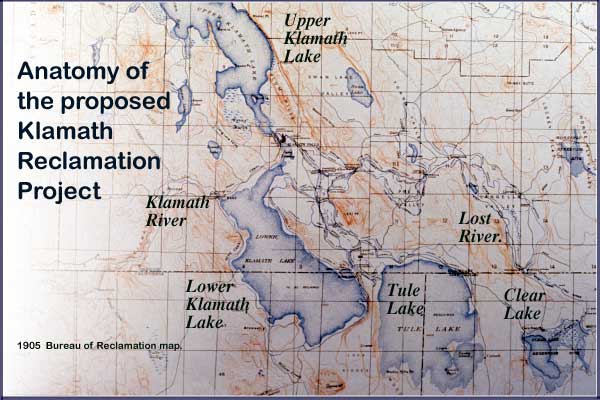 1903… a Concept is tested – the Bureau of Reclamation sent John T. Whistler, Engineer of the Oregon District, to investigate the possibility of the Klamath area becoming the second federal reclamation project.
Engineer Whistler found a long gradually sloping basin that on average dropped a foot in elevation every 1,000 feet. Upper Klamath Lake was at the northern end and two large shallow lakes, Lower Klamath and Tule Lake, were to the south. Water through the seasons advanced and receded between three basins and the Klamath River. The challenge for Reclamation would be to divert water from Tule Lake and Lower Klamath Lake to create productive farmland. 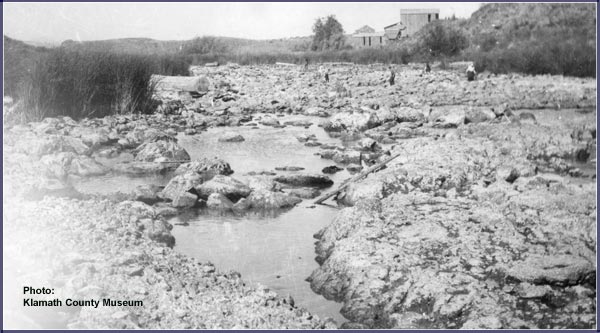 Summers could be dry – John T. Whistler was also aware that the mile-long Link River, connecting Upper Klamath Lake with the Klamath River, had an Indian village whose name meant “the river that flows two ways.”In the late summer,it was not uncommon for the river to go dry or have its water blown north into Upper Klamath Lake by wind. 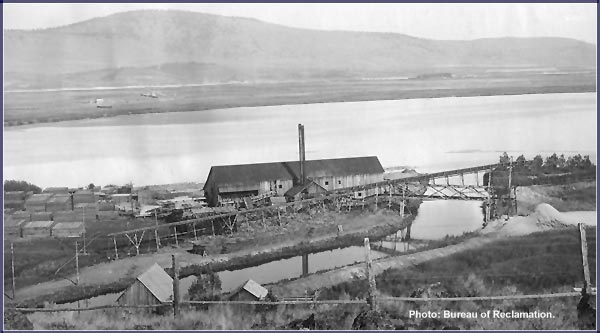 1904… Project Moves Forward – In July of 1904, Reclamation began the process when investigations and surveys confirmed the Project’s feasibility. Basin residents petitioned the Secretary of Interior, “99% of the people are a unit, and are clamoring for the assistance which might be rendered by the Government under the Reclamation Act.” 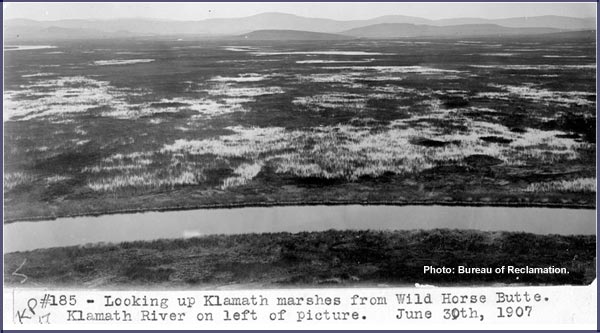 The Problem Was Getting Rid of Water – “ It contains an irrigation problem, an evaporation problem, a runoff problem, any one of which is difficult in itself but all of which together form a most perplexing whole. In nearly all reclamation projects water has to be conserved. In this project there is more than enough and the question of disposing of it becomes an import part.” Project engineer 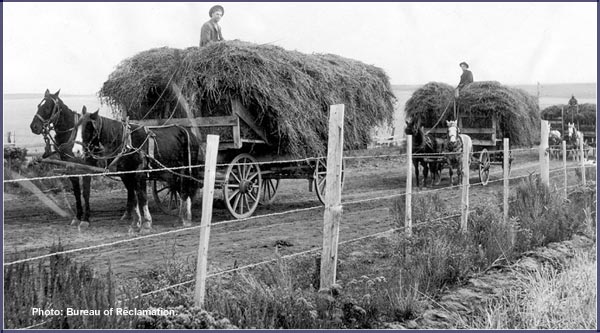 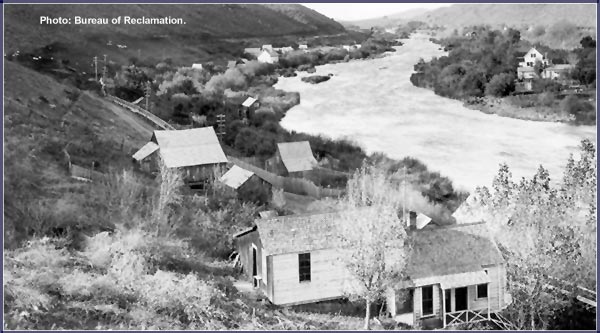 1905… Klamath Reclamation Project – The project was approved on May 15th, 1905 and one million dollars was immediately allocated. Reclamation began to buy, and unify,private water projects into one master plan. This photo is looking north up Link River towards Upper Klamath Lake. 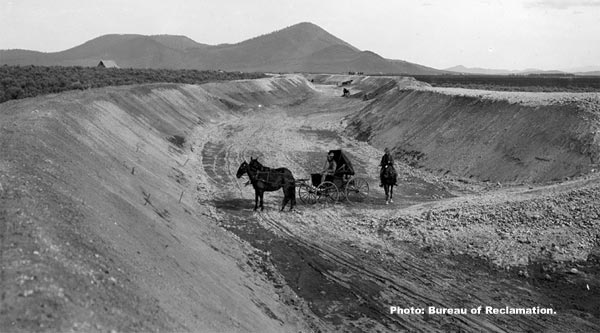 1906… Water Conveyance – Construction on the nine mile long Main Canal and six highway bridges crossing it began in 1906. Sheepy Ridge in the Tule lake Basin can be seen in the distance behind Stukel mountain. 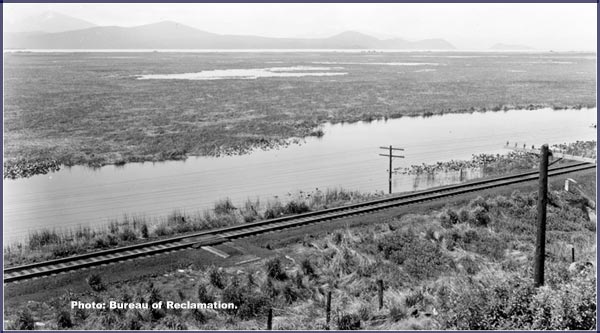 1907… Water and Transportation – The California and Northeastern Railway agreed to build a railroad embankment across the north end of Lower Klamath Lake to double as a levee. This would give the Project the ability to divert spring runoff that would flow south into Lower Klamath Lake. 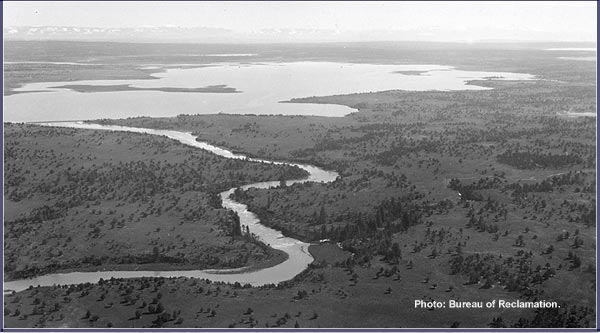 !908-1912… Controlling water from the east – Excavation for the Clear Lake Dam began in 1908.The 790 feet wide by 33 feet high earth and rock filled dam was completed in 1912.The reservoir had a two fold purpose: irrigate Yonna and Langell Valleys and hold backwater from Tule Lake. Excess flow from here could now be sent down the Klamath River through the Lost River Diversion Cana. Pre-project this water would go into Tule Lake. 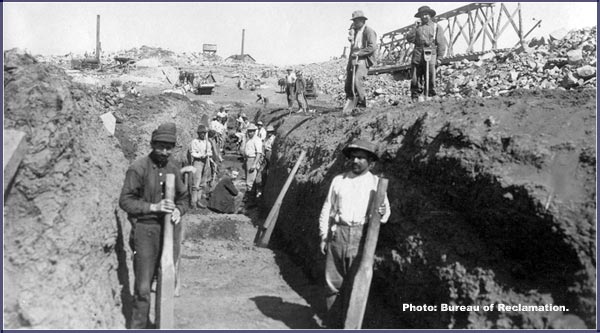 1909… Labor is needed – In July and August many workers left for higher wages in the harvest fields. 100 Bulgarians joined the work force in August. In busy months 200 men and 60 horses worked building the Clear Lake Dam. 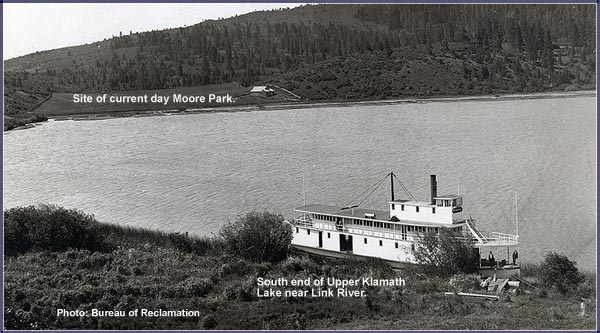 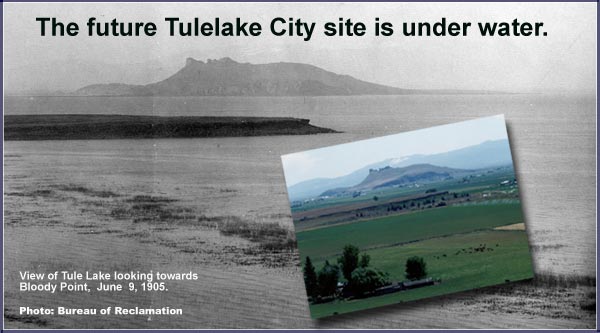 Water rights – Approval of the Klamath Project rested on adjudication of all vested and conflicting water rights and cessation of rights and title to the Federal Government by Oregon and California for Lower Klamath Lake and Tule Lake.

The 2001 Klamath Project water shutoff created an interest to comply information on the entire Klamath River Watershed. Events do not happen by themselves, they are part of a flow of events – one leading to another.