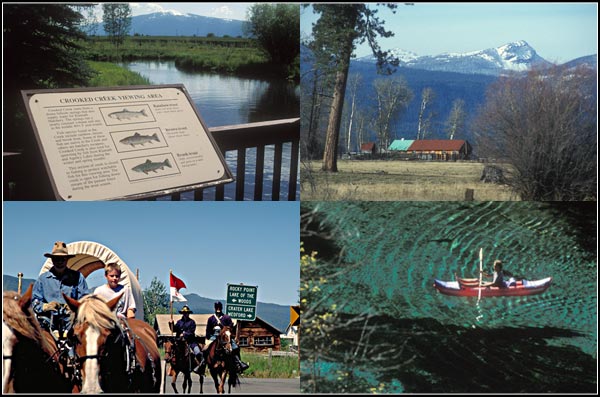 It All Started Here, And Here Lives On
Wood River Valley is the old west surrounded by mountains and it can be a stopping point
halfway between Point Comfort and Crater Lake. In the valley there are wonderful
places to visit: Kimball Park, Wood River Day Use Area and the Klamath Hatchery
on Crooked Creek. 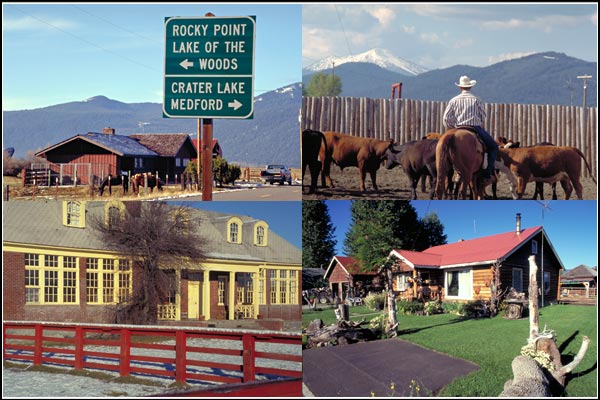 Fort Klamath
Fort Klamath is an unincorporated community of barely 200 people and is one of
the oldest settlements in Klamath County. Fort Klamath post office was
established January 6, 1879. In the summer, cattle are trucked in and graze
on rich pasture grass. The town is located about a mile northwest of
Fort Klamath, the Oregon Trail military outpost, which is listed on the
U.S. National Register of Historic Places. GPs: 42°41′31″N, 121°58′20″W 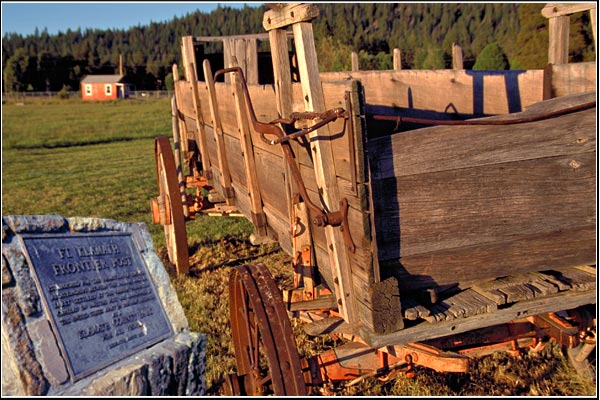 Fort Klamath Museum
Located north of Klamath Falls on Hwy. 62.  Fort Klamath was a frontier military
post established in 1863 at a time when the country was engaged in a Civil War.
Recruits were rallied from volunteers for service for Frontier Protection and
an enrollment office was established in Jacksonville in late 1861. The territory
they patrolled was huge as it covered the Southern Route of the Oregon Trail known
as The Applegate Trail. Most were young fellows from the farms of Oregon who came
in singing this ditty:  “I’m a raw recruit with a brand new suit. One hundred dollars
founty, And I’ve just come down to Ashland town, To fight for Jackson County.”

A replica of the Guard House exhibits artifacts found on the site, photographs and is
staffed by a knowledgeable docent who tells a compelling story of events witnessed by
those who lived there. The famous prisoners taken during the Modoc Indian War
were held in the guard house during their trial and until the final days.
The site has the graves of the Modocs executed following the War…Captain Jack,
Black Jim, and Schonchin John.  The Fort Klamath Jail and Post Office are on
the site.  A worthwhile stop on your way to Crater Lake. The grounds has a
replica of the old fort Gazebo if the weather is inclement and picnic tables.
Check with the Klamath County Museum for hours and days open…
The Fort Klamath Museum segment was written by Pat McMillian. 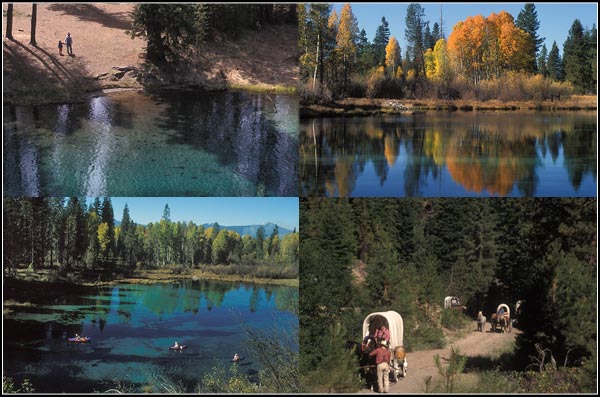 Kimball Park
J. F. Kimball State Park is a pristine site located at the headwaters of the Wood River.
A walking trail connects the campground to the site where the clear spring bubbles from
a rocky hillside. The park is a secluded place where you can contemplate the moment
while relaxing in the whispering lodgepole pines. Wood River flows from the pine forest
into open meadow land laced with picturesque quaking aspen surrounded by the
southern Cascade Mountains. Wood River offers fine fishing that can be accessed from
the park by canoe. Kimball Park offers primitive camping next to a spring-fed lagoon
at the beginning of this waterway. GPS: 42°44′18″ N, 121°58′48″ W

The park is operated and maintained by the Oregon Parks and Recreation Department,
and is located approximately 20 miles southeast of Crater Lake National Park and
3 miles north of Fort Klamath on Oregon Road 232, off of Highway 62. The park was
established in 1955, and covers 19 acres. including the headwaters of the Wood River.

There is a popular horse trail that begins at Collier Memorial State Park that leads
through the forest to Kimball State Recreation Site. Riders must make a round trip from
Collier State Park since there are no horse corrals at Kimball Recreation Site. 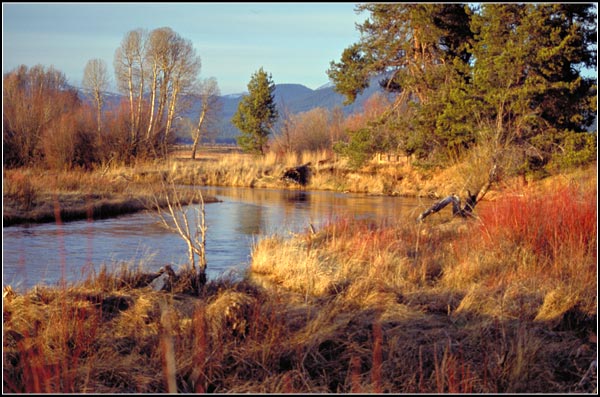 Wood River Day Use Park
The Wood River Day Use Area, elevation 4200, is located along the Wood River in the
Upper Klamath Basin. The site offers a disabled accesible trail system that winds
through stands of aspens, extending to meadow-shrub riparian areas and an overlook
of the river. A diversity of wildflowers blooms during the spring and summer. In the fall,
aspen, cottonwoods, and willow turn a brilliant yellow. The Wood River Area offers
three picnic sites, fully accessible trails, fishing platforms and restrooms, but bring
your own drinking water. Picnicking, fishing and wildlife viewing are popular activities.
This is also one of the popular stops along the Klamath Basin Birding trail. 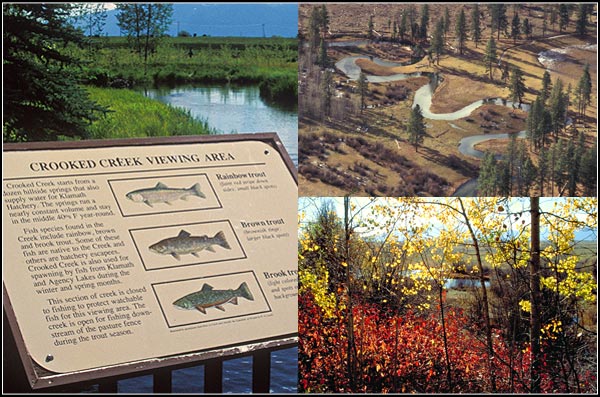 Visitors can also purchase fish food for 25 cents per small handful and feed
the trout in either the fish ponds or in Crooked Creek. There is also a viewing area
along Crooked Creek with a wooden deck to peer into the waters and feed the trout
that often come up to the surface in hopes of swallowing a food pellet or two.
Some of these fish are native to the Creek and others are hatchery escapees.
Crooked creek is also used for spawning by fish from Klamath and Agency Lakes
during the winter and spring months. 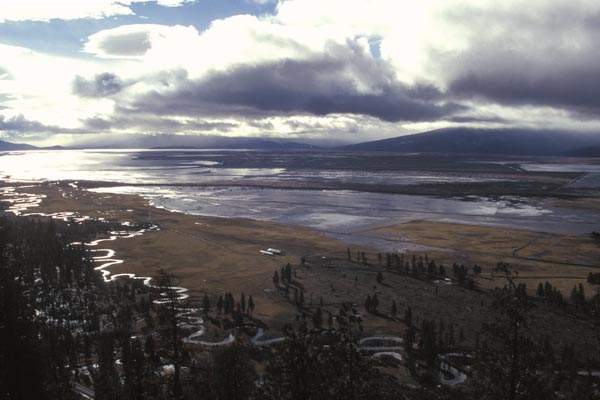 Looking south at Crooked Creek and a Flooded Wood River Valley.
Crooked Creek starts from a dozen hillside springs that also supply water for
Klamath Hatchery. The springs run a nearly constant volume and stay in the middle
40s F year-round. Crooked Creek is also used for spawning by fish from Klamath and
Agency Lakes during the winter and spring months. This section of creek is closed to
fishing to protect watchable fish for this viewing area. The creek is open for
fishing downstream of the pasture fence during the trout season. 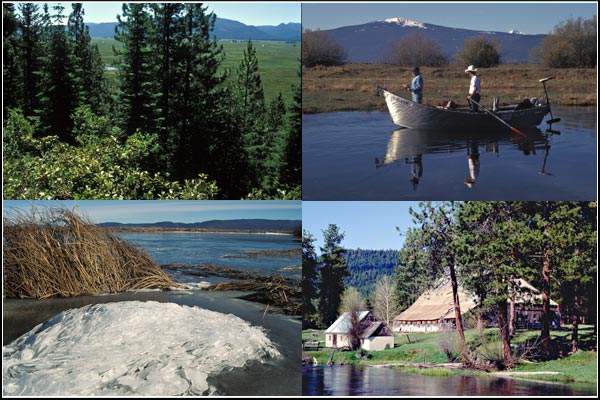 Wood River
The Wood River meanders 18 miles through the Fremont-Winema National Forests,
Bureau of Land Management land, and private property in southern Oregon before flowing
into Agency Lake. Its watershed consists of 220 square miles of conifer forest,
rural pasture land, and marsh with headwaters emanating from a large natural spring
located in Jackson F. Kimball State Recreation Site. The aquifer that feeds the spring
is believed to originate twenty miles to the northwest in the east side drainage of
Crater Lake National Park. The drainage around its headwaters is forest county dominated
by ponderosa pine and lodgepole pine with some quaking aspen in meadow lands.

The Wood River’s largest tributary is Annie Creek which originates inside the boundary
of Crater Lake National Park, and is fed by the park’s snowpack as well as groundwater
from natural springs. After leaving the park, Annie Creek passes through the Fremont-Winema
National Forests and then runs along the western border of Sun Pass State Forest
for about a mile. It then crosses private pastureland and is joined by Sun Creek
before joining the Wood River, about a mile south of Kimball State Recreation Site.
From there, the Wood runs south through the Fremont-Winema National Forests
and private pasture land before Fort Creek joins the flow. Below Fort Creek, the river flows
through private pasture land and then opens into a wide marsh. Much of the original marsh
is now pasture land. Water from the river is diverted into a system of canals to
irrigate grazing land in the surrounding valley. Finally, Crooked Creek joins the Wood
approximately one mile before it empties into Agency Lake, which is
connected to Upper Klamath Lake. 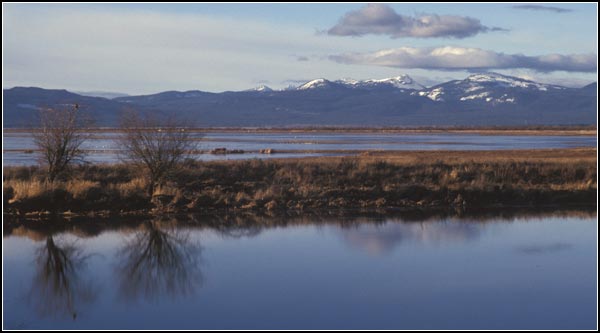 The Wood River Was Changed By Man And Changed Again.
In September 1992, U.S. Congress appropriated funds for the Bureau of Land Management
to purchase 3,200 acres of natural wetland along the north end of Agency Lake at the
mouth of the Wood River. This wetland area was converted to pasture land in the
1950s and 1960s. The land purchase was completed in 1994. Since acquiring the
Wood River property, the Bureau of Land Management has successfully restored
the wetland area and adjacent Wood River channel to a more natural state.
The channel restoration project was completed in 2001. The new channel meanders
through the marsh, increasing the length of the Wood River by over one half mile.
Overall, this project has improved water quality and created better habitat
for fish, birds, and wildlife.