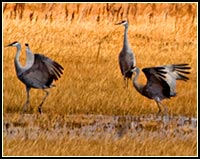 Lower Klamath National Wildlife Refuge
is the Nation’s first waterfowl refuge. President Theodore
Roosevelt reserved 81,619 acres of lakes and marshes along
the California-Oregon border on August 8, 1908 as a preserve
and breeding grounds for native birds. Here is the largest
wintering bald eagle concentration in the Lower 48 states.
August and September are peak months for viewing pelicans,
egrets, herons and grebes. An estimated one to two million
ducks and geese migrate through the basin each Fall and Spring. 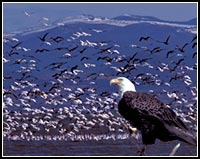 Tule Lake National Wildlife Refuge
is located in the fertile and intensely farmed Tule Lake Basin
of northeastern California. It was established in 1928 by
President Calvin Coolidge as a,“preserve and breeding ground
for wild birds and animals.”  This 39,116-acre refuge is mostly
open water and  crop land.  Approximately 17,000 acres are farmed.
The refuge is a significant staging area for migrating waterfowl
during spring and fall migrations.

Clear Lake National Wildlife Refuge
Except for limited waterfowl and pronghorn antelope
hunting during the regular California State seasons,
the refuge is closed to all public access to protect
fragile habitats and to reduce disturbance to wildlife.
Clear Lake Refuge, established in 1911, consists of
approximately 20,000 acres of open water surrounded by
over 26,000 acres of upland bunchgrass,low sagebrush,
and juniper habitat.

Upper Klamath National Wildlife Refuge
is located some 24 miles north of Klamath Falls, Oregon.
Crater Lake National Park lies approximately 20 miles north
of the refuge. The refuge is on the northwestern side of
Upper Klamath Lake and comprises 14,966 acres of swamp and
open water. It was established in 1928. At an elevation of
slightly above 4,000 feet, it lies in the shadow of the
forested east base of of the Cascade Mountains and is
watered by mountain streams and deep, clear springs. 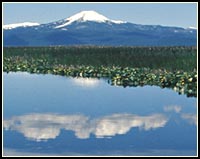 Klamath Marsh National Wildlife Refuge
is located eighty some miles north of Tulelake. Crater Lake
National Park lies approximately 30 miles west of the refuge.
The refuge is largely surrounded by the Winema National
Forest. The Klamath Marsh National Wildlife Refuge was
established in 1958 “… as an inviolate sanctuary, or for
any other management purpose, for migratory birds.”