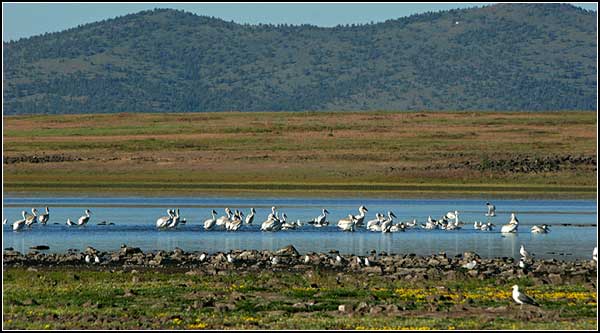 This Where Modern Man’s Footprints Are Hard to Find –
Except for limited waterfowl and pronghorn antelope hunting during the regular
California State seasons, the refuge is closed to all public access to protect
fragile habitats and to reduce disturbance to wildlife. The Refuge is actually
inside the Modoc National Forest, 1,654,392 acres of northeastern California. 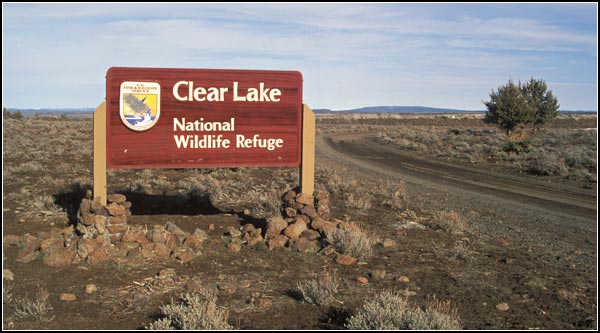 This Is Pre – Indian Country Where Antelope and Sage Grouse Roam –
U.S. Forest Service Road 136, also known as the Clear Lake Reservoir Road,
is twenty miles south of Tulelake off of State Highway Highway 139 to the
east. The southern boundary of Clear Lake National Wildlife is about another
ten wilderness miles along Road 136. 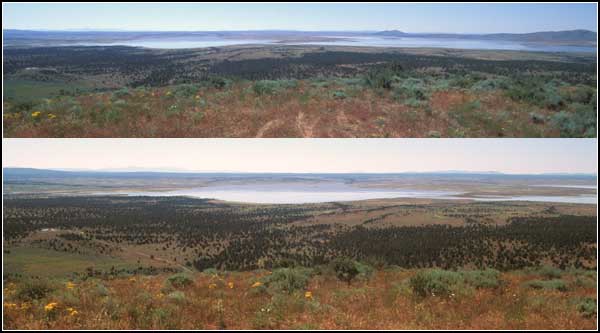 Two Views of Clear Lake from the North and West –
The top view is from atop Carr Butte looking south. The bottom view is from Horse
Mountain looking east. Either view is of a big landscape with little visible
presence of man. The largest recent change in modern times is the growing expanse
of juniper. Clear Lake Refuge, established in 1911, consists of approximately
20,000 acres of open water surrounded by over 26,000 acres of upland bunchgrass,
low sagebrush, and juniper habitat. The upland areas provide habitat for pronghorn
antelope, mule deer, and sage grouse. The Clear Lake Reservoir is the primary source
of water for the agricultural program of the eastern half of the Upper Klamath Basin,
with water levels regulated by the Bureau of Reclamation. 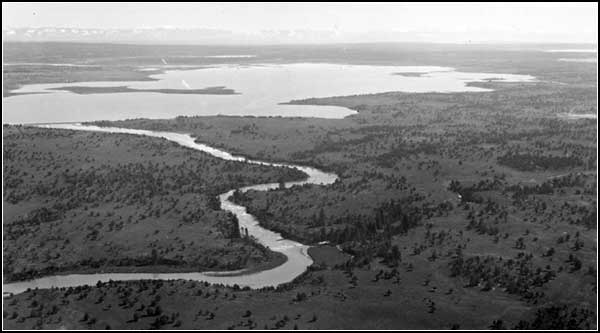 Looking Back At the Way It Was On An Unknown Date –
Prior to the construction of the dam in 1910, a natural lake and meadow existed
above the dam-site. The meadow was seasonally grazed by the Carr Livestock Company.
During most years, the Lost River below the present dam ran dry from June through
October. Today, Clear Lake Refuge is managed as a natural sagebrush/grassland plant
community by using a combination of livestock grazing and prescribed fire.
Approximately 600 Animal Unit Months, government speak, of permitted cattle grazing
occurs on the “U” portion of the refuge. 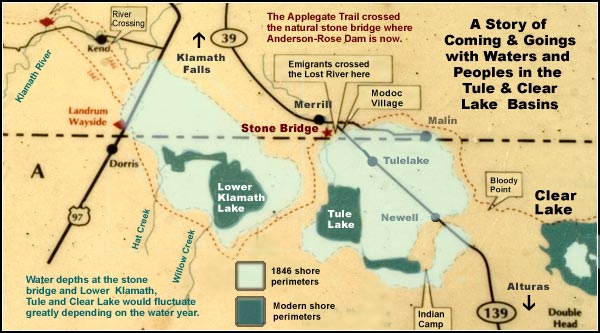 First There Were Indians and Then Came Settlers By Wagon Train –
It is easy to forget modern times when one is near Clear lake National Wildlife Refuge.
The Warner Mountains are to the east and a ridge, Tule Lake Basin, Lower Klamath
Basin and the southern Cascades Mountains are to the west. The word tranquility
comes to mind but the reality is this is a landscape with a volcanic past. And this
is a landscape that will change in the future, it is what landscapes do. 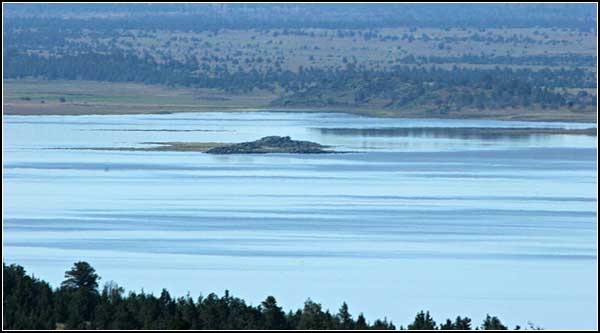 A Place Where Colonial Nesting Birds Feel Safe –
Small, rocky islands in the lake provide nesting sites for American white pelicans,
double-crested cormorants, and other colonial nesting birds. During the spring, summer
and fall it can be a very busy place 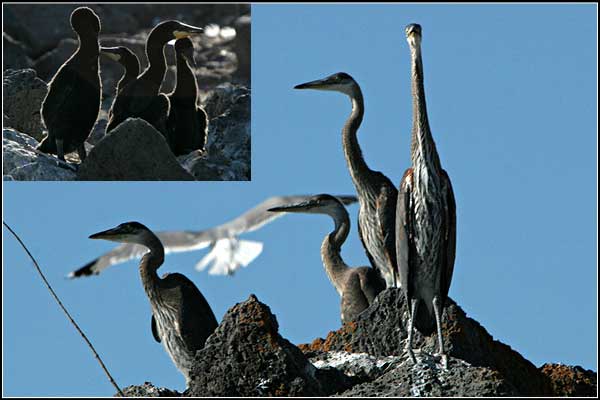 Here They Nest in the Sanctuary of Clear Lake –
Colonial nesting doubled-crested cormorants and blue herons build their nests on
the islands. During fall and spring migrations Canada geese and many duck species
visit the lake. It is rarely quiet when birds are here. 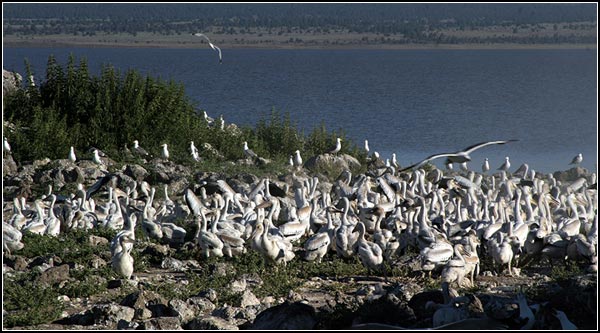 White Pelicans Can Be Seen Most of the Summer –
The refuge monitors waterfowl use via aerial surveys during the fall and spring.
White pelican and double crested cormorant nesting colonies are monitored by
boat every spring. An average of 1,000 white pelicans and 500 cormorants are
fledged annually. California and ring-billed gull nesting colonies are also
monitored, with approximately 3,500 California gulls and 5,800 ring-billed
gulls nesting on the refuge. 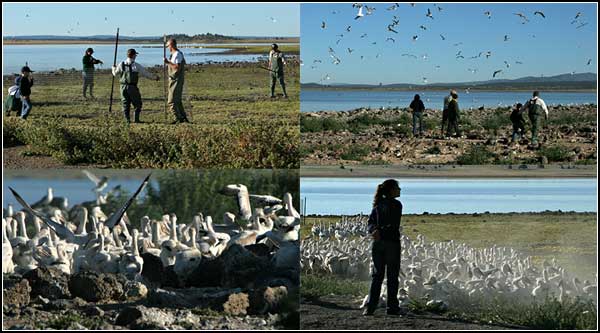 Have You Ever Tried to Grab An Unwilling Pelican? –
First, build a pen and then round up some pelicans. Pelican banding at the “Clear
Lake Corral.” United States Fish and Wildlife have been banding young pelicans
at Clear Lake since 1963. Controlling young pelicans is not an easy task.
To see more Clear Lake Pelican Banding 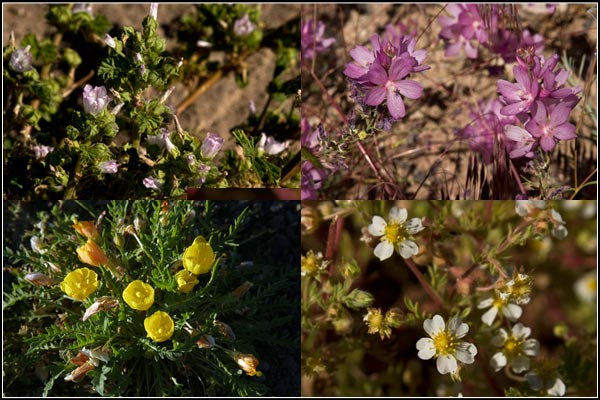 Wild Flowers Celebrate Life –
Out here there is only the wind and a sky that seemingly knows no end. Time is measured
by one’s breathing like flowers moving with a breeze. Here, Indians and wagon train
settlers left marks of other ages. Clear Lake National Wildlife Refuge is more than
protected, it is removed from development – here spirits recall hunters and trappers
making the best of a hard go. It is what it was, and for the few, whatever the flora
or fauna, who find themselves visiting this land it may be just enough. 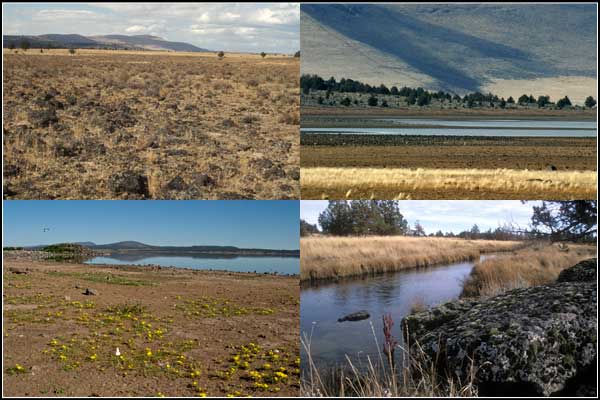 Hills and Plains, Rock and Water, Life For Those Who Call This Home –
Clear Lake National Wildlife Refuge: for some it is home, for others it is a sanctuary,
a place to nest, and most importantly, somewhere to visit that has water – and the
celebration of life that water brings with it.