The Tule Lake Basin is Famous For Its Nutritional Alfalfa –
There are over 60,000 acres of hay, alfalfa and grass varieties, in the Upper
Klamath Basin. Haying, on average, takes place from June 1 through Oct. 15.
This season will go longer due to the wet spring. 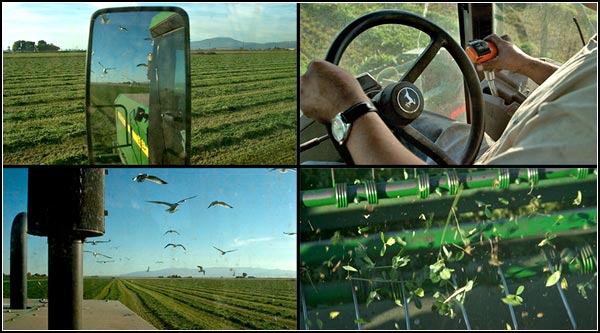 Seagulls fly Around the Cab as the Swather Cuts Alfalfa –
Alfalfa is usually cut three to four times in the Tule Lake Basin because of the high altitude,
cooler nights and shorter growing season. The later cuttings produce a greater yield
but less nutrition content. 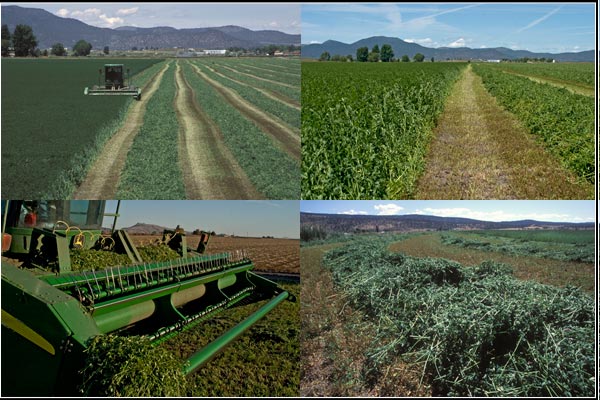 A Second Cutting Through A Tulelake Alfalfa Field – 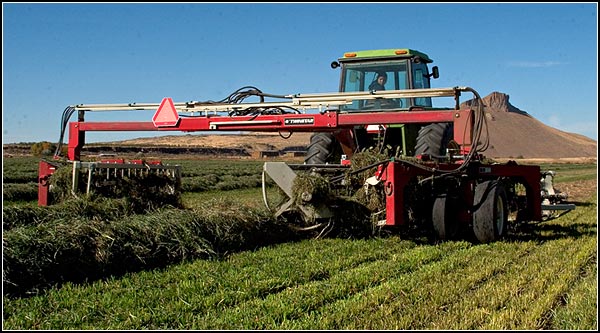 Just Like Cooking It Takes a Chef to Raise Great Alfalfa –
A hydraulic rake brings two windrows closer together as it turns the orchard grass
over to dry evenly. When the grass has the proper moisture level it will be
baled. This alfalfa will be sold to feed horse. 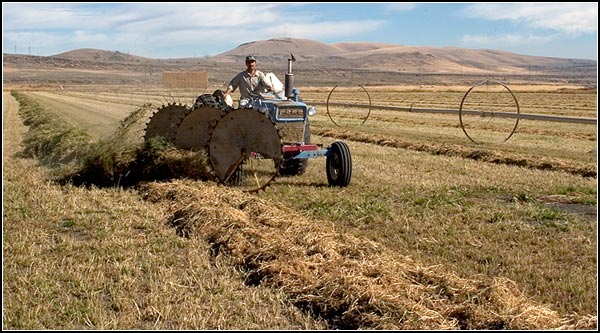 It Is All About the Digestible Nutrients –
A three wheel turning rake inverts the windrow. The highest quality hay, rich in
total digestible nutrients, is sold to dairies. Other markets include export and
retail for horses. Alfalfa has roots that are 6 to 8 feet deep. A stand can be
productive for 7 to 9 years. 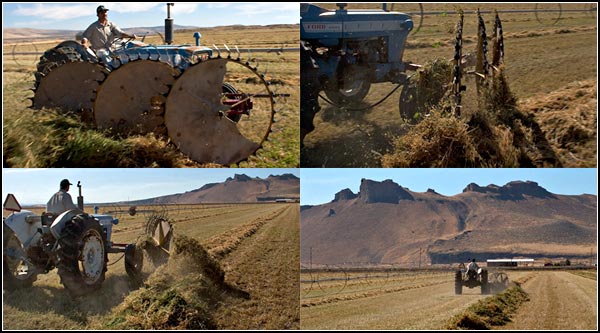 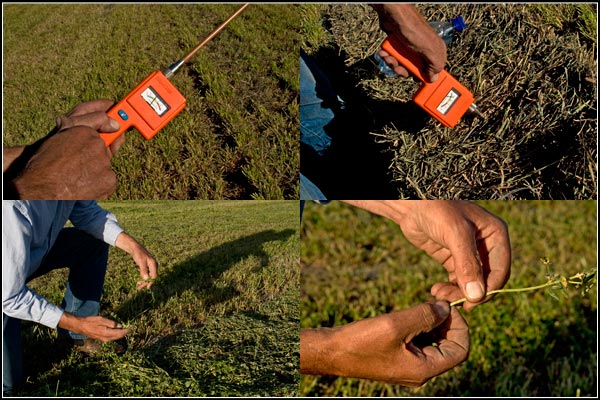 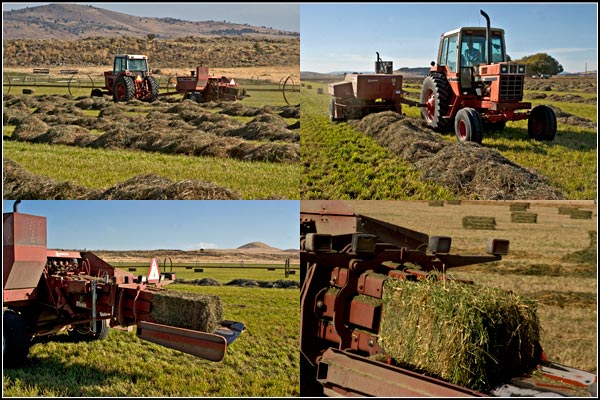 Making of a Alfalfa Bale – 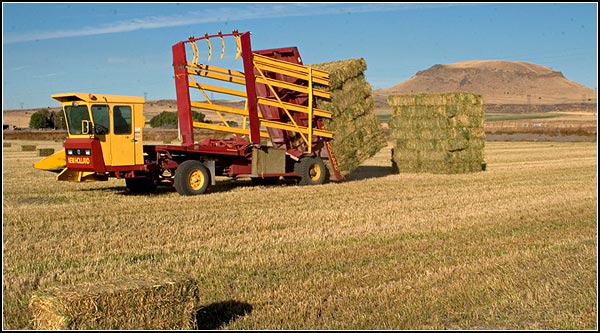 A bale wagon drops a unit next to another unit –
A long time ago in far-off south-central Asia may have been alfalfa’s origination.
Alfalfa was first cultivated in Persia. Around 490 BC it was introduced to Greece
as fodder for the army’s cattle and horses by invading Persians. In the first
century AD it was introduced in Italy. When grown on soils where it is well-
adapted, alfalfa is often the highest-yielding forage plant, but its primary
benefit is the combination of high yield per hectare and high nutritional quality.

Spanish colonizers, in the 16th century, introduced alfalfa to the western
Americas as fodder for their horses. In the 1850s alfalfa seeds from Chile were
imported to California. This was followed by quick and widespread introduction of
the crop across the western US States. Alfalfa was becoming an American word. 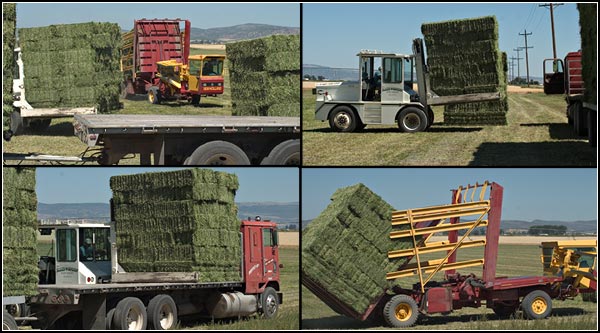 It Pays To Think Ahead –
Later, a hay squeeze will come and lift these units onto a truck and trailer.
Alfalfa requires growers to be thinking two weeks ahead and to always be
monitoring moistures levels in the soil and in the bales. 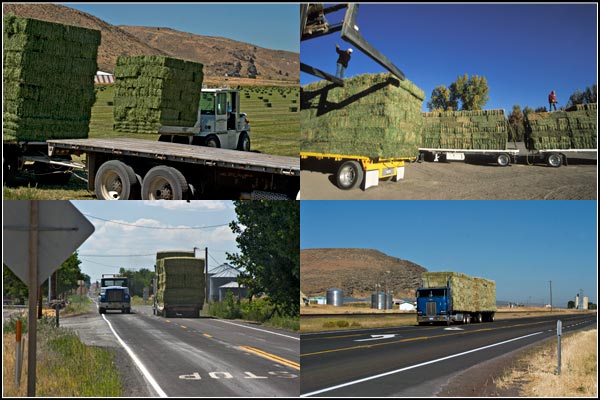 Onto Trucks and Off to Waiting Markets –
“Key factors to consider include the total seasonal yield, forage quality, and the price
spread between different hay quality categories. Other issues include hay marketability
and the impact of cutting schedules on stand persistence.”
University of California forage farm advisor Steve Orloff 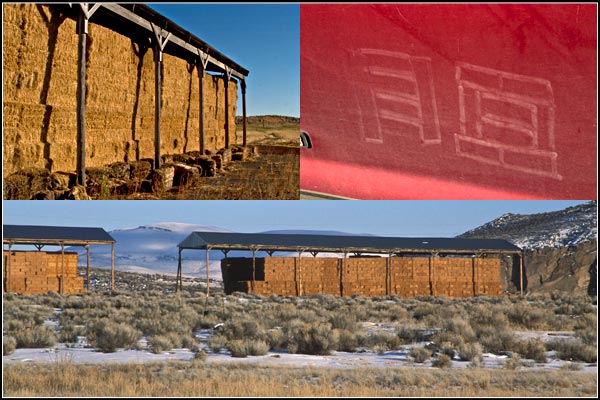 Stacked With A Plan And Protected From the Elements –
Raising alfalfa is a business and deliveries are made when it is profitable to do
so. Alfalfa is stored while waiting for the right delivery moment. Young alfalfa
leaves have been used in China, for more than 1,500 years, as a herbal medicine
for digestive tract and kidney disorders. Others used alfalfa leaves for digestion
issues,arthritis and water retention. 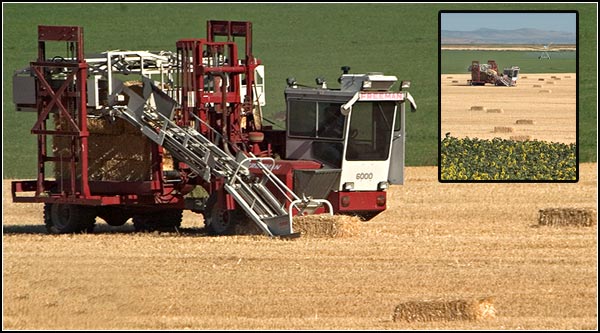 The Dance of Machines and Their Moving Parts –
The bale wagon is a fun machine to watch at work. Here, it is gathering straw
bales. Straw is used for many things including bedding in animal pens, roughage,
barn dance seats and even straw bale houses. Straw is the stalks that supported
the harvested grain heads. 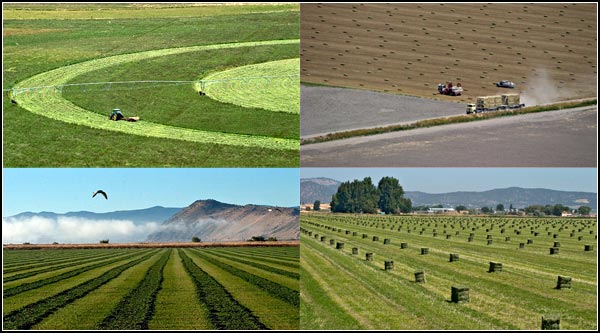 Farming is all about Patterns, Lines and Each Has A Reason –
Alfalfa grows to a height of up to 3 ft, and has a deep root system, sometimes stretching
more than 49 ft. This makes it very resilient, especially to droughts. Alfalfa is a legume
and its root nodules contain bacteria, Sinorhizobium meliloti, with the ability to fix
nitrogen, produce a high-protein feed regardless of available nitrogen in the soil.
Its nitrogen-fixing ability, which increases soil nitrogen, and its use as an animal feed
greatly improve agricultural efficiency. 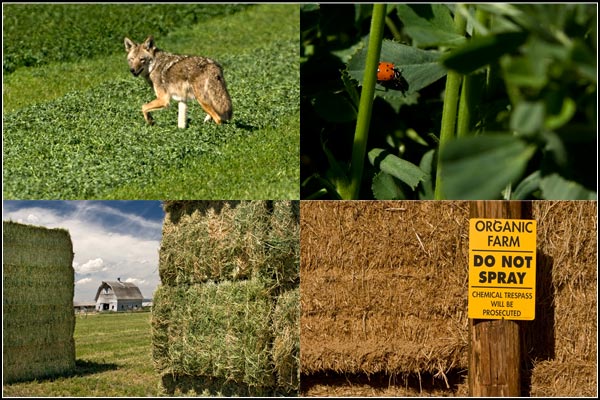 Each Moment Has Its Moment, Each Day Has Yesterday and Tomorrow –
Alfalfa can be sown in the fall or spring and requires sustained potassium and
phosphorus levels for healthy crops. When grown on soils where it is well-adapted,
alfalfa is often the highest-yielding forage plant, but its primary benefit is
the combination of high yield per acre and high nutritional quality. 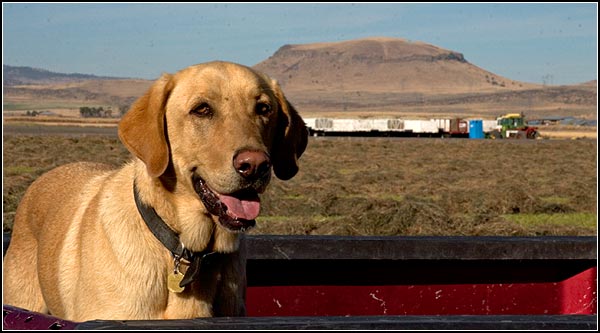 It Takes More Than Farmers and Machines to Raise And Harvest Crops –
Buster, a 3-year-old yellow lab, enjoys riding in farm tractor cabs. In the off
season he hangs out with two neighbor dogs. These 3 musketeers visit frequently
visit the nearby dump. The dump man put up a “Buster Crossing” sign.
Buster, “he’s da man.” In the background onions are being harvested. 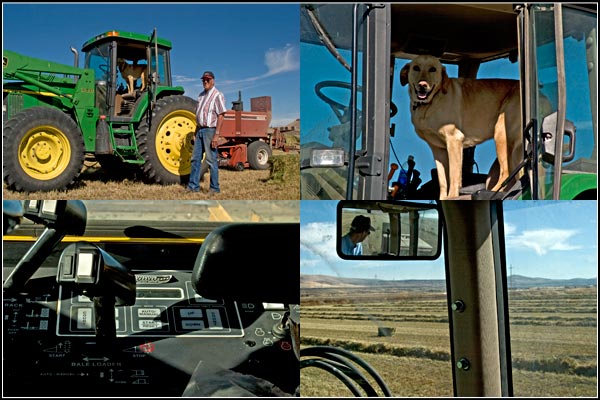 Farming is a Multi-Generational Thing –

This page is in progress. More content is coming.