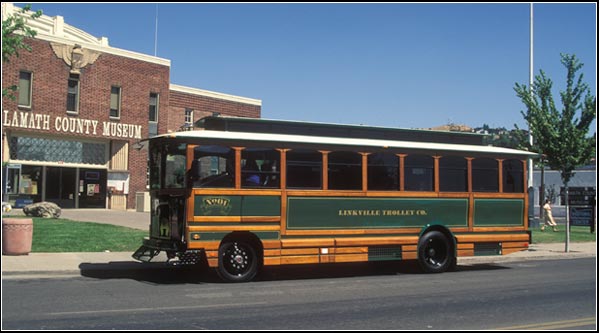 The Klamath County Museum
For the flavor and history of the area, a trip to the County Museum is a must. A state of the art Timber display vividly explains the importance of the Timber Industry and its significance to communities of pine covered forests. Significant events are portrayed by amazing photography and artifacts. A substantial exhibit of the Modoc Indian War graphically outlines the story of a small band of Modocs pitted against U. S. Cavalry. A little known event of WWII exhibits fragments of the Japanese Balloon Bomb which exploded near Klamath Falls killing the only U.S. citizens on U.S. soil. A monument and memorial are on the actual site. A campsite with a sheepherder’s Ark are a stark reminder of some of the early settlers’s experiences. A tree dug from the ashes of the Mt. Mazama eruption 7,000 years ago found near Crater Lake, one of the national wonders of the world in northern Klamath County. For more information visit Klamath County Museum 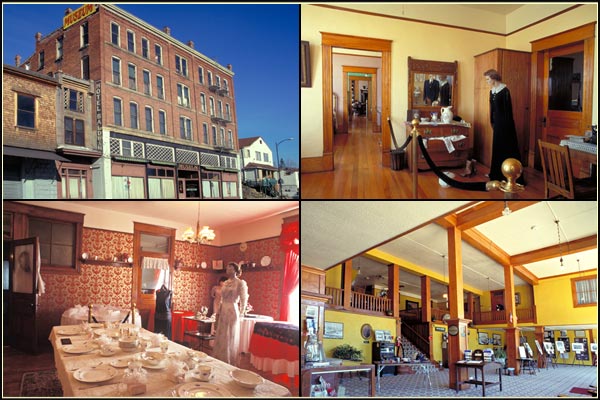 The Baldwin Hotel
George Baldwin who had been trained in the Tinner’s trade moved from Ashland with his bride, to the sparsely populated town of Linkville in 1874. Unable to support his family solely on his customer base at the Tin Shoppe, he earned extra income by carrying mail contracts, he rode Pony Express from Redding to the government post office at Fort Klamath. Always the entrepreneur, George and a partner opened a Hardware Store which flourished and led to other successes. In early 1895, he was one of three businessmen who incorporated the Klamath Falls Light and Water Company. The plant had a capacity of 360 sixteen candle-power lamps, about what would be required for a hotel of one hundred rooms.

News that the railroad was coming spurred George to begin his next project. Workmen began stair stepping the basalt hillside with picks, shovels and sledgehammers to create a foundation for a three story building and further established a brick yard whose resources would be available for the new high school . Both were accomplished simultaneously and the new “Baldwin Brick” hardware store, apartment and office building opened at the end of February 1907.

Budding commercial opportunities and economic development during these years prompted the conversion of the Baldwin Brick into a splendid new hotel which was completed in the summer of 1911.

The Hotel stands today as it did in 1911. It remained in the Baldwin family until it was sold to Vera Jones parents and then passed on to Vera and her husband. The original furnishings were left when Klamath County purchased it for a museum.

The Baldwin is seen by tour and stories abound in the furnishings and people who once visited. The first and front section of the second stories were kept as they were, but artifacts from the area detail local doctors, businesses, clothing displays and a wealth of information you can’t afford to miss. The Baldwin is closed in the winter, unless you call ahead and arrange a special tour, and open May through September. See the museum website for changes.
For more information visit Klamath County Museum 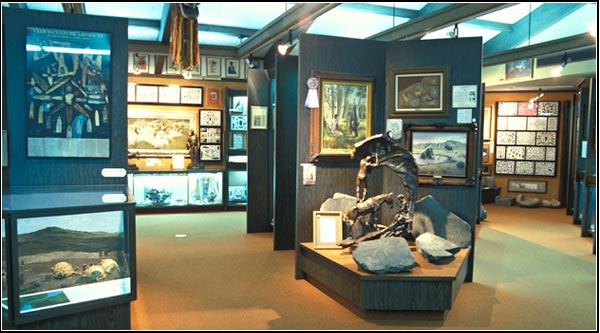 The Favell Museum
Named for its founder, Gene Favell, whose life passion was saving the culture of Native Americans, built the Favell Museum to share his collections with the world. Artifacts are from throughout the western United States from the Plains to South America and Alaska. Unique to the Favell are artists renderings of Native American ceremonies displayed with the artifacts to flesh-out in the viewer’s mind how they were used. A 13,000 year old Clovis Point underscores the early Paleo-Indians of the area and their hunting skills in stalking the wooly mammoth. An ancient Atlatl found with the boatstone intact, a tool which extended the throwing power of the arm. Thousands of examples of arrowheads, effigies, slave killers, and henwas whose usage remain a mystery, all held cultural significance to their tribes. The collection includes materials of the little known Chumash and their beautifully embellished pipes and knives. Pottery and basketry from the Pomo, Salido, Anasazi and numerous other tribes. The largest known miniature collection of firearms, a Charles Russell original from a private collection and paintings from nationally acclaimed artists as John Clymer, James Bama, Frank McCarthy, Arnold Freiburg, and Mort Kunstler to name a few. Recently honored as one of the best museums in the U.S., our visitor’s still say, why don’t we know about this museum? American Byways wrote, “..a very special place where art and culture come together…considered on the the three best such museums in the United States.”…while Frommer’s Travel Guide states, “Anyone with an interest in Native American artifacts or Western Art will be fascinated by a visit to this unusual museum, considered on of the best Western museums in the country.”
This amazing museum became a non-profit upon the death of its founder and is totally funded by private support from Patrons and small grants.
For more Information visit Favell Museum

The content above was written by Pat McMillian. Pat was Director of the Klamath County Museums and Tourism for 17 years. She was director of the Favell Museum for 7 years and became Curator 3 years ago.

Acknowledgements
Bill and LoEtta Cadman, Ina and Roy Reed, Pat McMillian, William Brady,
Andrew Ortis, John Pratt, Art Eggleston, Rob Crawford – Crawford Farms,
Bev Wampler, Gayle and Chuck Jaynes, Richard Kopczak and
Cindy Wright are some of the many folks that allowed access to their
libraries and, or, shared information, time and labor to help Anders
compile the above timelines.