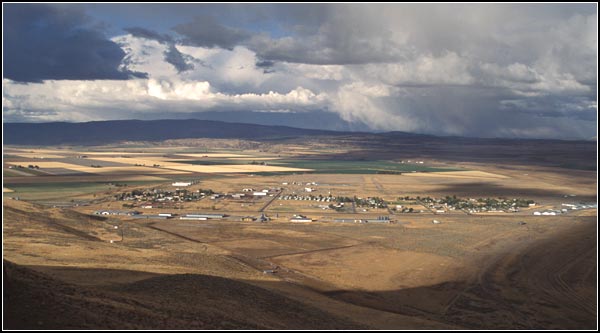 This view from the Peninsula takes in most of the old Internment Camp
Newell, California was born out of the War Relocation Authority’s Japanese-American
Internment and later, Segregation, Center. Once the decision was made tp build a
center on Bureau of Reclamation land in Tule Lake Basin equipment and supplies
arrived on site April, 1942. By June, 1500 Japanese-Americans and Japanese aliens
were living along with a large contingent of government guards, officials and
support staff. Ultimately this became a city that housed as many as 18,000
internees. When the camp was closed in May 1946 a substantial infrastructure was
left in place: five deep wells, red cinder roads, many surplus buildings, water,
sewer, electricity, Southern Pacific Railroad lines and Highway 139. The concept
was raised of creating a township to serve the new Veteran Homesteaders. Five
years later, June 1951, lots in Newell were up for sale by the Bureau of Reclamation. 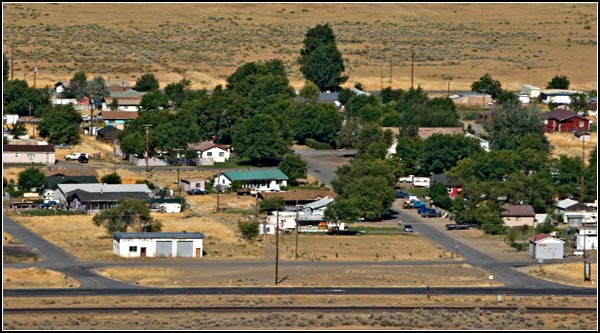 A City Block in Unincorporated Newell, California
1947 was the year the Newell Homestead Club was formed. It focused on schools,
improved roads, telephone and electric service, mail routes and protect farmers.
There was no much to do and a need to do it quickly as the homesteaders moved
onto their 160 acres. The homesteaders not only a house to build but they had
a town to build where once tens of thousands were kept. 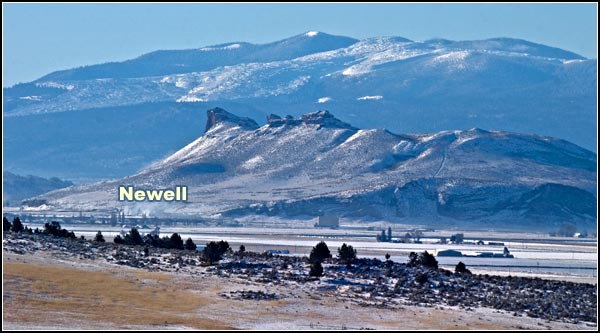 Peninsula and Medicine Lakes Highlands to the south and west of Newell
By 1949 utilities, water, sewer and electric service was in-place. Newell had access
to the Central Pacific Railroad and a Klamath-Alturas bus stop. The big challenge
was to build a school and the homesteaders learned it was going to be on their
shoulders. And an elementary school was built including a kindergarden. Newell
Elementary School, operated by Tulelake Basin Joint Unified School District, would
close in 1982, reopen in the 1990’s and close again in the 2010’s.

Newell, California As Seen from the East Atop Horse Mountain
from horse Mountain, or the Clear Lake Hills, one can take in most of the Tule Lake
Basin. The footprint of the World War II U.S. Army facility named the Tule Lake War
Relocation Center, now referred to as the Tule Lake Internment – Segregation Center,
can clearly be seen. Tule lake Municipal Airport, given to Modoc County for 0ne dollar
by the Department of Reclamation, features a 3,500-foot paved runway. The Union Pacific
Railroad Modoc Subdivision tracks run along the west side of town and parallel to SR139.
Tulelake National Wildlife Refuge, a unit of Klamath Basin National Wildlife Refuge
Complex, is west and northwest of the town. The Peninsula – Castle Rock is managed by
the U.S. Fish and Wildlife Service federal reservation. 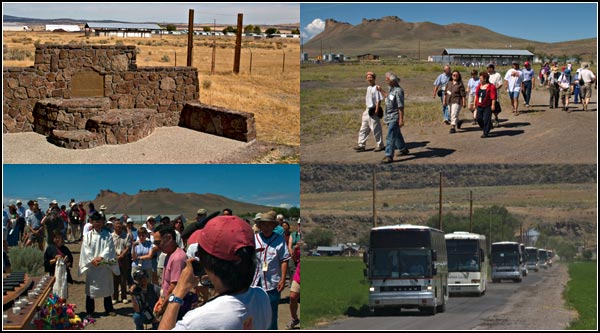 Tule Lake Pilgrimage Brings Hundreds to Remember Those Years Here
During World War II, 120,000 Japanese-Americans were incarcerated in Federal
relocation centers: one out of four spent time at Tule Lake Internment –
Segregation Center. Designed to hold 10,000 internees within a square mile Tule Lake
began construction in April 1942. One month later, internees began arriving from
Northern California, Washington and Oregon. Confinement peaked at 18,789. Nearly
30,000 were imprisoned at Tule Lake which remained open until 1946, the last Federal
relocation center to close. Tule Lake Internment Camp was the largest and most
infamous because in July 1943 it became Tule Lake Segregation Center. Internees
from other relocation centers who refused to sign a loyalty oath or caused
disturbances were sent to Tule Lake. 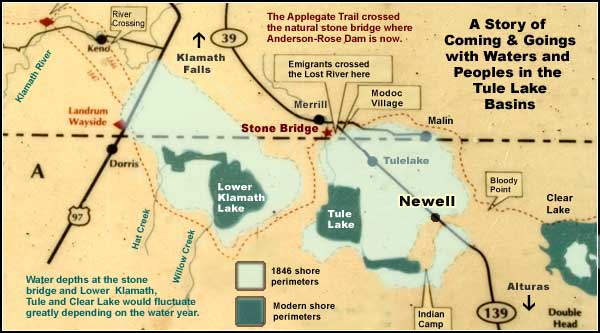 Newell, Like Tulelake, Was Under Water at the Turn of the 20th Century
Tule Lake Basin is part of three North American geological regions: the Basin and
Range, the Pacific Rim of Fire and the Lakes Region. The Tule Lake Basin was once
a deep valley between the Clear lake Hills and Sheepy Ridge, the distance between
the two, currently 13 miles, was increased by recoil action from colliding North
American and Pacific Plates. Over time valley filled with a couple of thousand feet
of sediment from northern waters which drained into Tule Lake and organic matter
including volcanic material and organic materials from wetlands and migrating waterfowl.
The Peninsula is a volcanic remnant next to Newell as are the nearby Lava Beds. 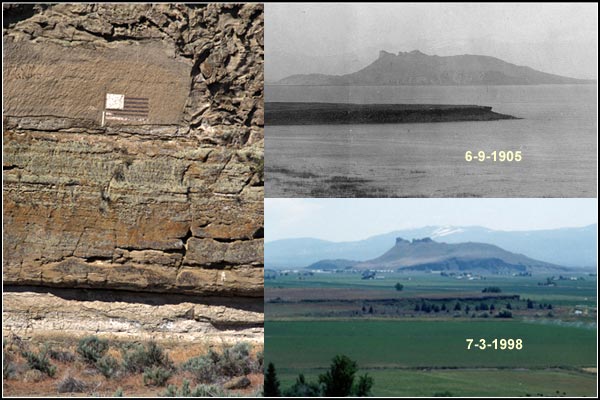 A Living Memory Painted on The Peninsula An example of how Tule
Lake has changed over the years can be seen in the above photos. On the left-hand
side is the handiwork of Charles Coppock who painted an American flag on Prisoner
Rock – part of the Peninsula directly the west of Newell. At the time, 1917, Tule
Lake’s water level was four feet beneath the flag. The two photos on the right
illustrate Bureau of Reclamation impacts since since 1905. 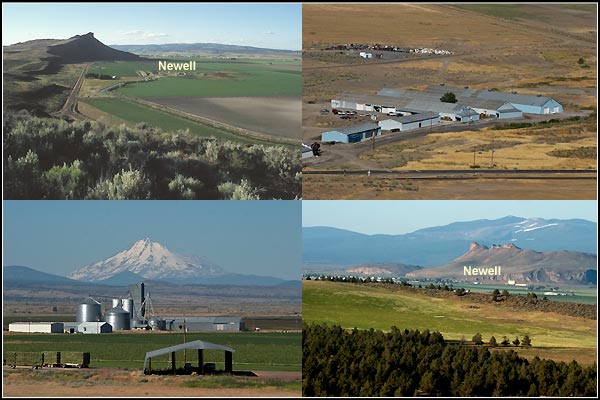 Newell Businesses Are Surrounded by Interesting Mountains
Newell had a population in 2010 of 449. The town, 2.4 square miles, sits at an
elevation of 4,042 feet and is less than eight miles south of Tulelake, California.
There are many grain and horseradish storage facilities in or near Newell. 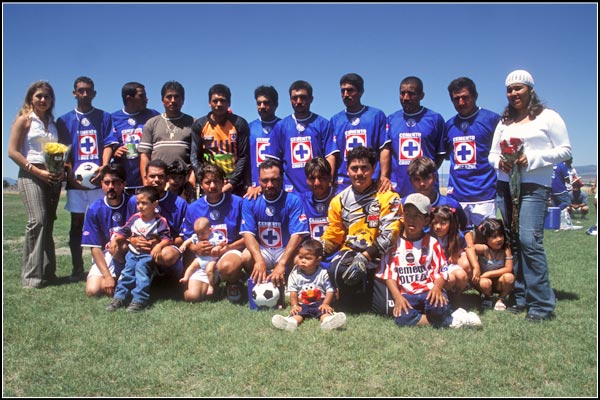 Soccer Is A Big Deal In Newell And All Of Tule Lake Basin
60.4% of Newell’s population is Hispanic or Latino. Across the Tule Lake Basin it
is much the same: Merrill 43.1 % Malin 57.8% and Tulelake 59.5% Hispanic or
Latino. All of these towns have their own soccer team and stage heated contests
amongst each other. Every year one town can call itself kings of the Tule Lake
Basin and, hopefully, champions of all upper Klamath Basin, including
the big city of Klamath Falls, Oregon, poplation 20,000. 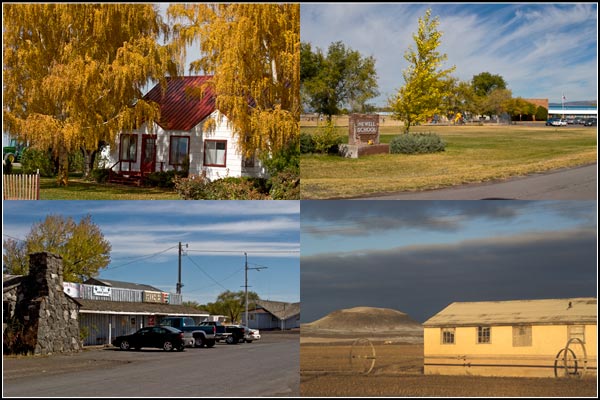 Fall in Newell, California
Farmland in the Fall is more relaxed than during the Summer with farming and
harvesting in full production. Clockwise from the top left: Fall color frames a farm
house on its original 160 acres. The Newell Elementary School is immediately
south of the Internment National Monument property managed by Lava Beds National
Monument staff. One of many Internment barracks that were given to homesteaders is
seen with Horse Mountain in the background, Another remnant of the Internment Camp
is this civilian workers recreation hall which is now the Homestead Market. 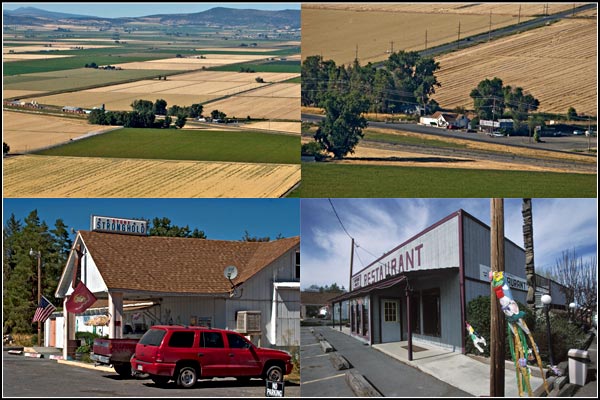 Just North of Newell is A Wonderful Restaurant. Well Worth a Visit
The photos above start with a view looking northeast across the Tule Lake Basin from
atop the Peninsula. The camera zooms into a stand of trees and buildings that could
be in the middle of no where. But any place is somewhere and in this case this is
Captain Jacks’s Stronghold. For some it may be surprising to find a menu,
food, cooking and service of this quality. And the walls are filled with wonderful
local art work. 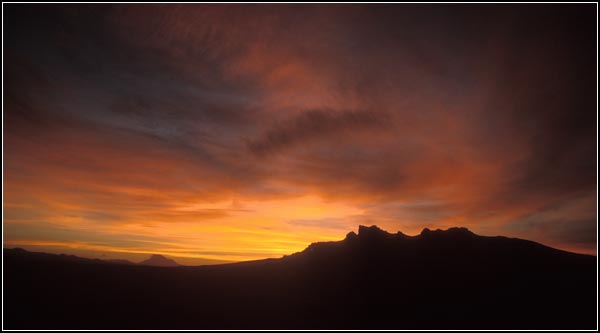 Fire Red Sunset In a Volcanic Landscape
Another day comes to a colorful close in Newell, California. The Peninsula and
Mt. Shasta, peeking over a ridge, settled in as the night begins to cool. What
will tomorrow bring to Newell, California? That will be up to the people that
are there at that moment and what the earth has up its sleeve.