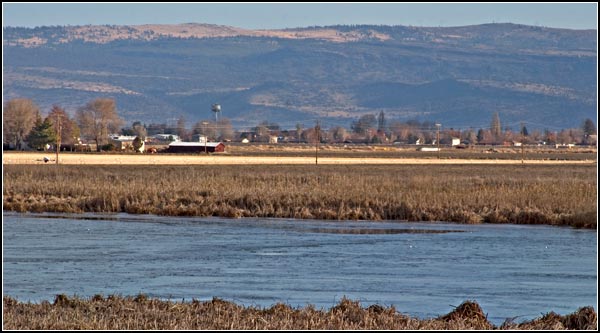 Looking At Tulelake From Across The Lost River On Christmas Day
The City of Tulelake, California is a young city. It sits on land in Siskiyou County,
just south of the Oregon border, that was reclaimed from Tule Lake by the Klamath
Reclamation Project which diverted water down the Klamath River. Tulelake is on
Highway 139 which connects Bend and Klamath Falls, Oregon along with Alturas and
Reno, California. Some thousand people live in Tulelake at an elevation of 4,066
feet above sea level. This is rural American farmland and wildlife refuge.
This is big sky country moving across a fertile volcanic landscape. 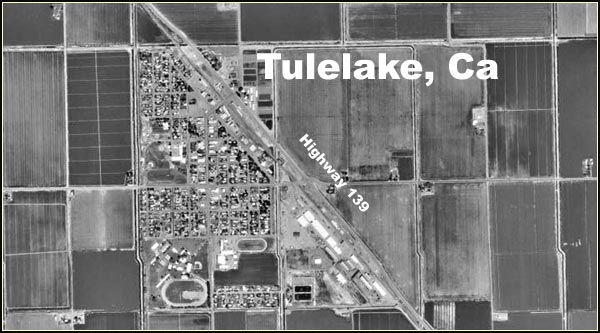 A Town of the New West
With the opening of the 1922 homesteads, plans were drafted by the Reclamation
Service for a town site if it could be economically and socially feasible.
Homesteads allotments in 1927, 1928 and 1929 proved to be successful.
Southern Pacific Railroad had laid track connecting Alturas, California
with Klamath Falls, Oregon. The Tule Lake Basin was looking like a good
place for the town site. Years passed before the first public auction of
Tulelake lots was held on April 15th, 1931. 121 lots were sold on that
day for between $65 and $350. The city area expanded with additional auctions
in 1932, 1936, 1941 and 1948. Tulelake was incorporated in 1937. The 2010
Census noted that there were 347 households and 437 housing units in Tulelake. 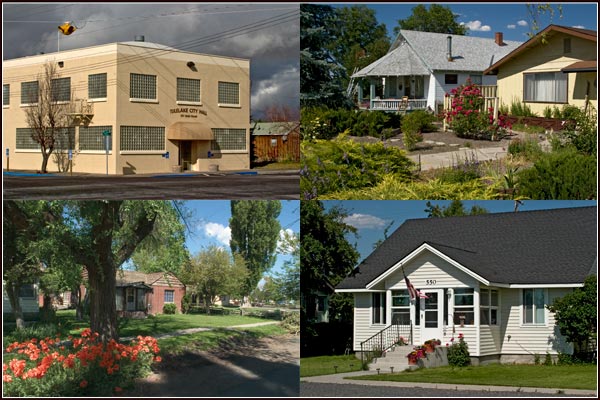 Tulelake Has Had Its Ups and Downs
As early as 1922 there were plans for creating a “government town” south of
the Oregon- California border. This would wait until the economic conditions
and population would trigger developments. Klamath Project Director Herbert D.
Newell, namesake for Newell, California, announced there would be a town
created three miles south of the border. J.W. Taylor, homesteader and engineer,
laid out the to-be town’s streets, property lines and blocks in 1930. The Havlina
moved wood frame buildings to Main Street from nearby fields. These would become
several cafes, auto repair, tire dealer, pool-hall and migrant worker cabins behind
Main Street with toilets and showers. A lumber yard and post office opened in 1931.
American Legion Post 164 was built in 1932. Other developments in the 1930’s
included the two story Clyde Hotel, Shasta Lunch, clothing store, Marcha Theater
and Tulelake Hotel. 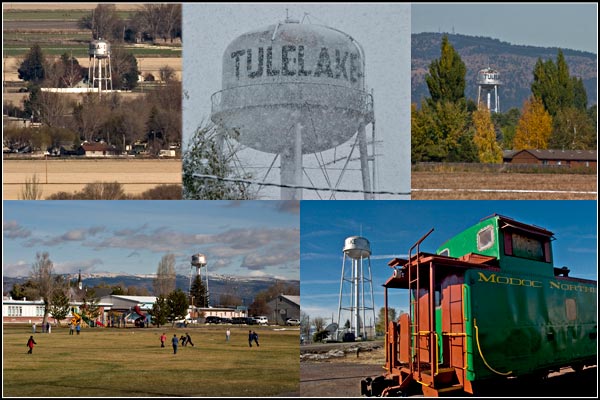 Tulelake, California Has Always Been a Story of Water
For a long time the site of present day Tulelake, California could have been under
twenty or more feet of water. And then water was diverted away from the Tule Lake
Basin and down the Klamath River. When The town of Tulelake was more than a drawing
and people started to arrive there was no water. People could go to Malin and take
away fresh drinking water from Kalina’s store. The Southern Pacific railroad would
also bring water by water tank cars from Perez, thirty miles south, and leave the
cars at the Stronghold and Tulelake sidings for public consumption.
Wells were drilled to 1900 feet in 1938 and 2,200 feet in 1941 without good results.
The water had large amounts of methane and was famous for being able to explode
or catch fire. It was proposed to separate the methane from the water and sell both.
A 2,254 foot deep well was drilled in 1951. At first it was fresh usable water but
that did not last long. Goldfish were known to die. A nearly 3,000 foot deep well was
drilled in 1953 and was able to produce fresh water under it own pressure.
The current water tower was built. Tulelake had its own water supply. 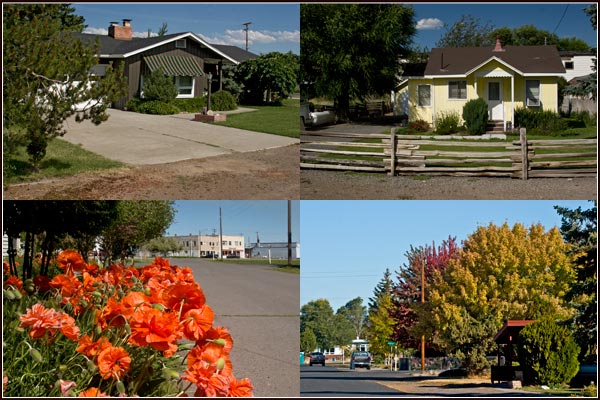 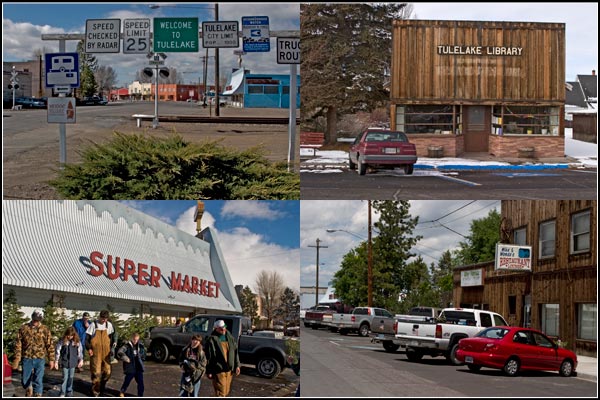 A Place Where Everyone Knew Each Other’s Names
The town’s grocery store in rural America has always been a meeting place.
Earl Ager started one of the first Tulelake businesses in 1930. He built a
warehouse on the new Tulelake railroad siding and sold Case tractors. The
depression, and a hard frost, made it hard for farmers to afford their
tractor payments and Ager went out of business in 1932. Ager married Dorothy
Frydendall in 1934 and together they started a grocery business at the Clyde
Hotel in 1935. They built a large store in 1940 with ice cream fountain, cafe
counter, groceries, general merchandise and a community phone on Modoc and Main
in 1940. The Ager’s sold the store to Jock Giacomelli in the mid 1950’s.
Earl’s market became Jock’s. today, the store is now run by Jock’s son
Tony Giacomelli. Tony was instrumental in the creation of this website which
went online in 2004. 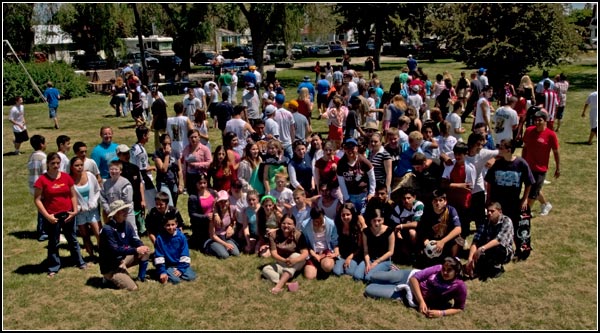 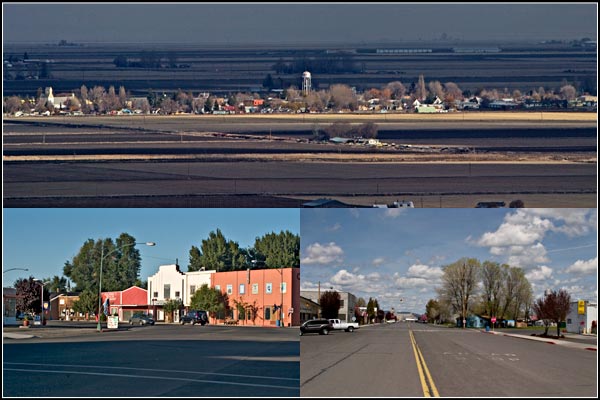 The 1950’s Was a Dynamic Period in the Life of Tulelake, California
On March 4, 1950 3,000 folks turned out to watch mayor W.R. Moore turn on 18
streetlights from Highway 139 to East-west Road at 6:46 pm. A big event for
Tulelake was development of the Tulelake – Butte Valley fairgrounds in 1952
and its opening in 1953. The Otis Roper Community Park also opened to the
in 1953. Tulelake’s population was peaking at around 2,500. 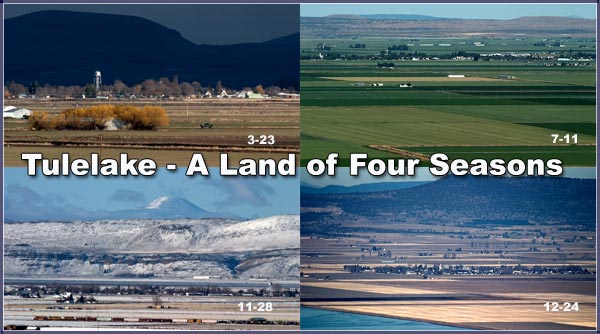 Each Season Has Its Own Characters and Actions
Seasons and weather move through the Tulelake Basin on their own accord. Skies
and temperatures can change quickly. With the seasons come waterfowl migrations
and farming. Today, Tulelake’s fields are as green as fields can get. Farming
began in the Middle East some 11,000 years ago. Coming out of an ice age there
was a great drought that lasted 1,000 years. Hunters and gathers could not survive.
Cultivated crops became the salvation of human civilization. In spirit, these
fields are related to agriculture’s dawn. 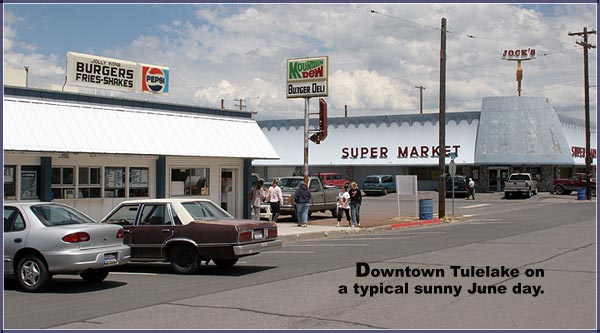 Main Street small town USA
Tulelake experienced growth and when 86 World War II veterans drew their names
out of a pickle jar on December 18, 1946 and won homesteads. There were also
86 alternates selected.

Main Street was jumping.
Working together Tulelake moved into the 1950’s
with optimism and a can-do spirit. Today, like
many rural main streets life is not as busy.
Times had changed. California instituted a sales
tax so products just north of the border, to this
day Oregon does not have a sales tax,
were now cheaper. The car dealers left.
And shoppers went to big box stores
twenty-plus miles away in Klamath Falls. Life in Tulelake, and everywhere,
was changing. Today Tulelake has a quiet Main Street. There are no stoplights
in town. There are are an elementary and high school. Conversations at Jock’s,
the local food market, revolves around the events and deeds of Tulelake children.
It is a small town. It is a farming town with a fair share of federal employed
residents. Highway 139 and the Volcanic Legacy All-American Road bring visitors.
There is much to see around Tulelake – a crossroads of history. 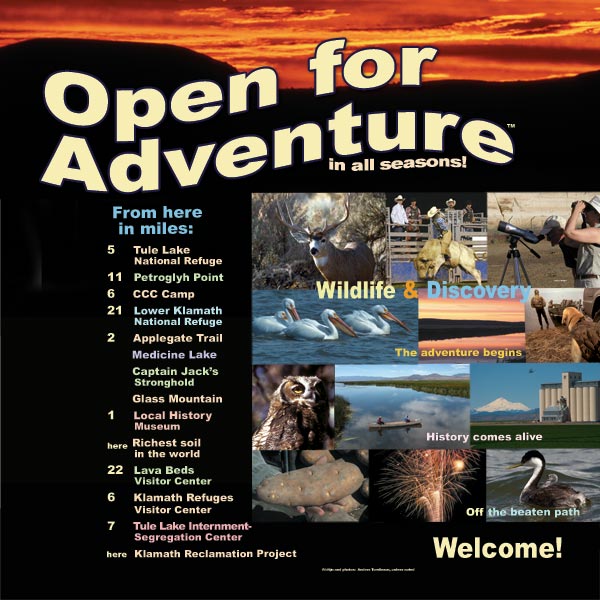 All of this within 39 miles from this rest stop
The adventure begins as history comes alive off the beaten path. If you sense
you have a homesteader’s spirit, or the urge to be part of nature, Tulelake,
California is a destination that has much to offer.

To see more Destination around Tulelake