• A Peruvian Apple Cactus Stem and Its Flowers 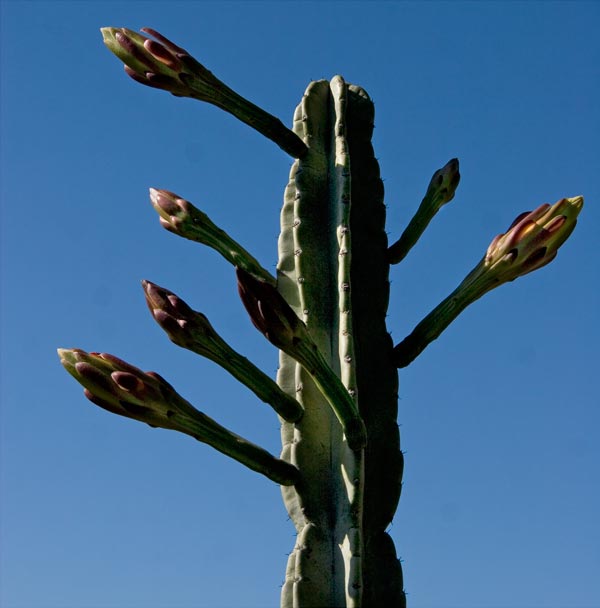 Day Before the Blooming Begins
Later this evening three flowers will open up. They will be the first flower blooms on
this stem but not the first on the cactus. Meanwhile, there are events and changes
all over Planet Earth, events that may be effecting this cactus 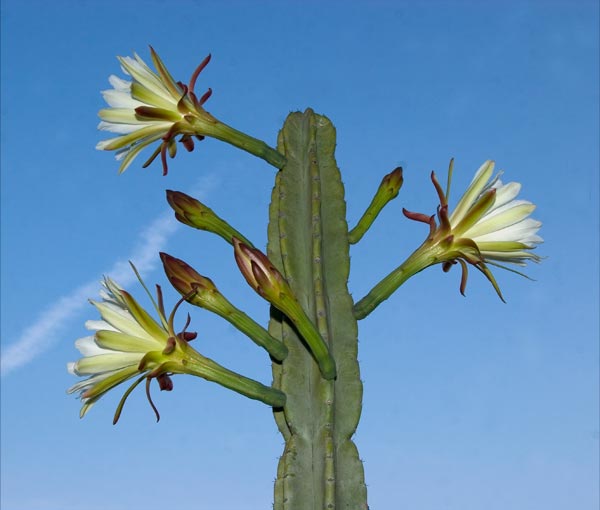 Second Day of Blooming
The next morning the flowers are open but there are no bees. An unseasonable
Santa Ana wind out of the east most likely blew unprotected bees out to sea or
wherever they go for shelter. Meanwhile, as many as 2,100 people are killed in
northern Afghanistan mudslides. 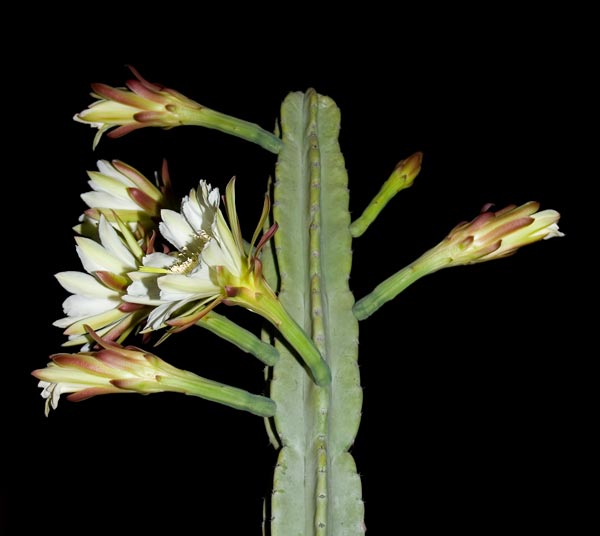 No Invitations Are Needed For This Party
San Diego, Ca., wildfires start in canyons surrounded by urban development.
The fires were fueled by Santa Ana wind conditions that normally occur in
October – November. This was the second Santa Ana winds of 2014. 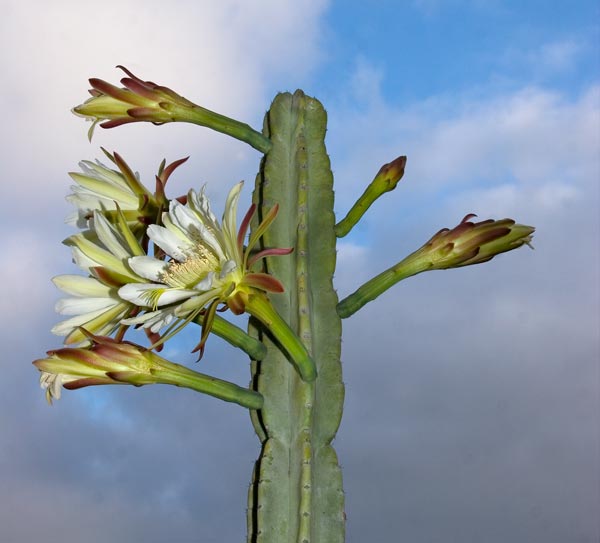 Third Day of Blooming
This photo was taken in the morning as clouds began to roll in. Meanwhile, pro-Russian
unrest in Ukraine and Office Depot announces it will close 400 stores in the U.S. 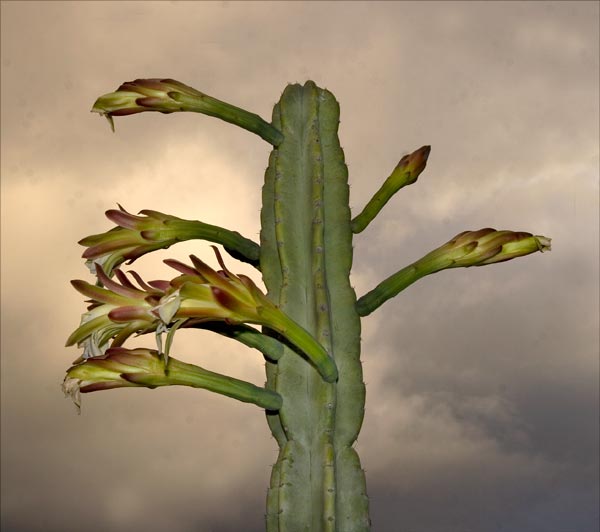 Third Day of Blooming, A Storm Approaches
This photo was taken later that after noon. The light had changed. It felt like an
approaching storm was on its way. Meanwhile, Islamist insurgency in Nigeria kills
at least 125 people and Vietnamese naval ships collide with Chinese ships over
China building an oil well in disputed waters.
The storm, and beneficial showers, did not materialize. 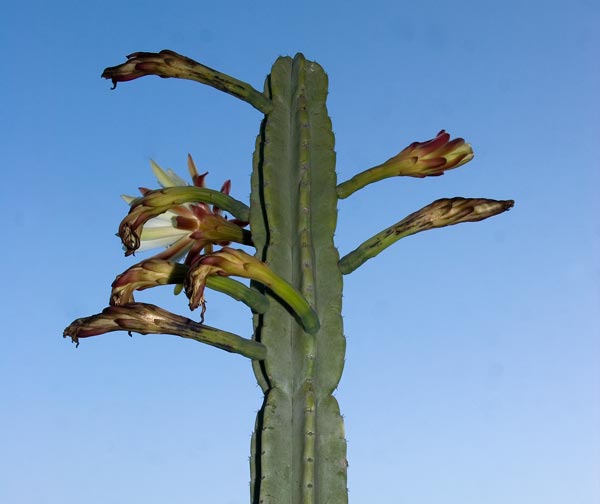 Fourth Day And The Party Continues
There is smoke on the northern horizon. Meanwhile, British Bank
Barclays announces it will cut 19,000 jobs and Brazilian oil company
Petrobas plans to cut 8,000 jobs. Meanwhile, the first bee was noticed
visiting the cactus flowers. It appeared lethargic with little joy or enthusiasm. 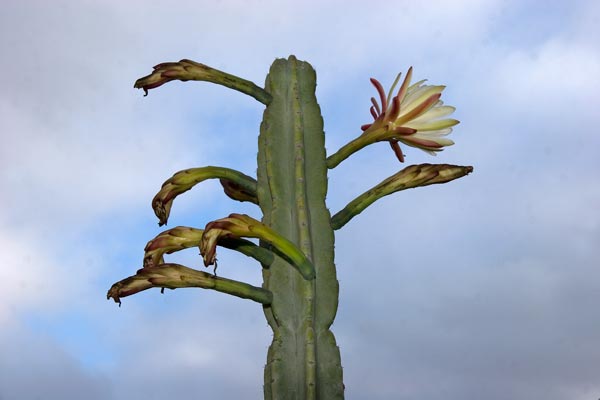 Fifth Day and Another Flower
The last areole on this section of the stem opens up. Meanwhile, Iraq launches
military operations to regain control of Fallujah. South Korea claims to have found
three uninvited North Korean drones on its land. 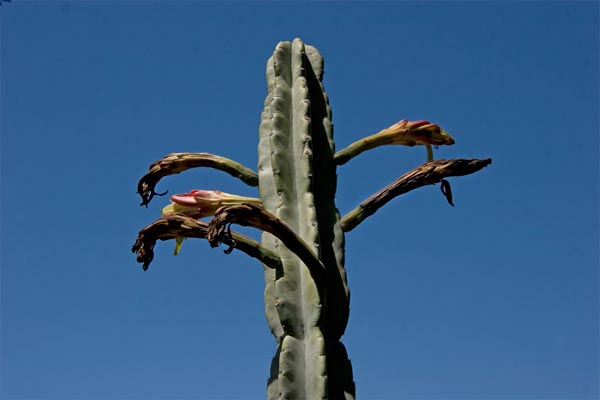 Sixth Day, But Who Is Counting?
The Cactus party is over. Now the areoles will break off and fall to the ground, with,
or without, the base that can become a Peruvian Cactus apple. Meanwhile, a Chinese cargo ship collides with a Marshall Islands register container ship near Hong Kong
and two boats loaded with illegal immigrants collide off the coast of Greece. 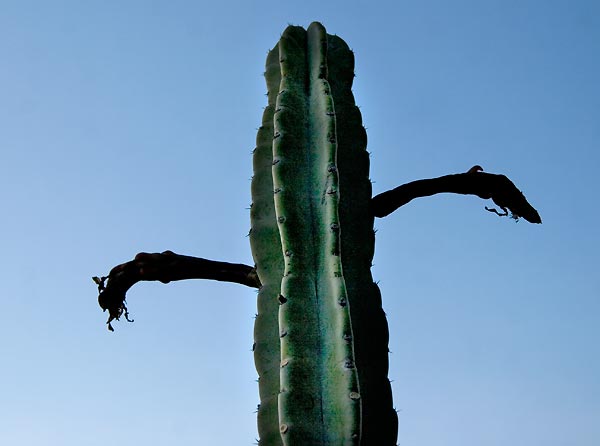 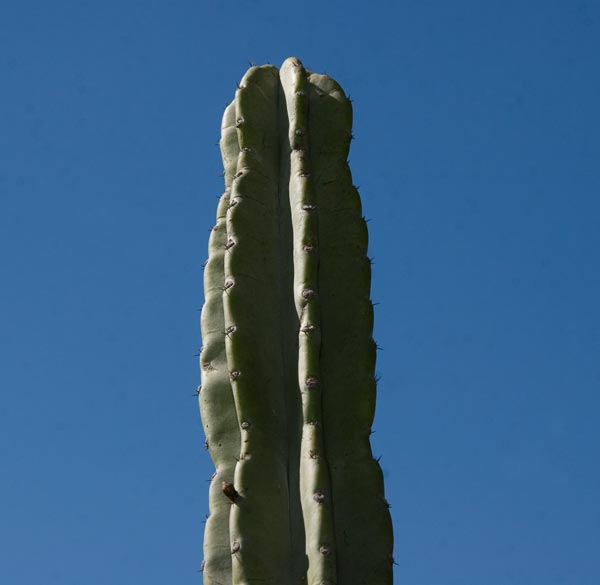 Tenth Day and the Stem is Bare, except for…
Notice at the bottom left-hand side there is a new aeriola forming. There are five other new areoles on this stem segment. The party continues. Manwhile, Serbia, Bosnia and Herzegovina are damaged by the heaviest rains and worst flooding in over a century
The areole above bloomed in the dark on June 14th.
Meanwhile, on that day, Sunni and Shiite forces faced off in Iraq.