Anders, since 1968, has had many paint
studios- dedicated places, his special
spaces where colorful dream journeys
embark and a unique language of color,
shape, line, marks, texture, intention
and exploration is spoken. Anders is
speaker, listener, entertainer, entertainee,
message, messenger, all of time and of
this moment. In this personal place Anders
is encouraged to be Anders. 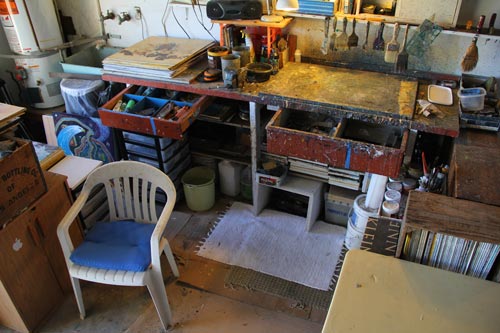 This is the place Anders finds himself in thought and action

Few people, over five decades, have visited his
studios. Each time he walks into the studios
he enters a realm of private meditation and
internal conversation and he is never alone.
The irony is Anders is always aware of the
viewer. To this point, Anders spends a great
deal of time looking at the works in progress.

Each night, he selects six works that are
nearing completionto be displayed in his
bedroom. They are the last things he sees
before he goes to sleep and they are the first
things he sees upon awakening. One benefit of
this process is that it gives him an idea of
what the first art moves will be that day.

Anders realizes that art is a two-way street.
He feels the meaning is in the viewer’s mind
and he should not influence the viewer with
his thoughts of what the painting means. When
he displays his paintings online he generally
writes a couple of sentences, poems, that open
up thought and discussion much like a cosmic
tour guide leading followers by suggesting
transcendent questions.

Paintings on masonite, canvas and paper rest here in peace.

Over the decades, works have accumulated
into groupings that become series, then join
together into families which become, most
importantly, his body of work. In the end,
everything becomes one journey and process:
reflections on a life lived and moments
experienced. Anders is a graduate of the
“School of 50,000 Mistakes” whose motto is
(again with irony) there are no mistakes,
only opportunities. 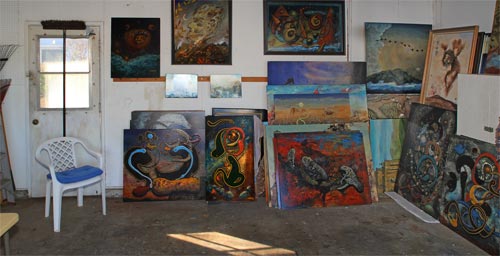 These are paintings currently in progress.

At any given time Anders has at least 50 pieces
in progress. If one includes his acrylics on
watercolor paper the potential jumps into
the hundreds. There are several themes at
work in his paintings: we are not alone, we
are all related, chance is god-like, homo
sapiens are a stage not an end, sorrow is
universal, it takes littles to have bigs,
evolution migrates, we cannot see everything
we hear, does everything need an answer?
All are expressed one gesture at a time,
one decision, one choice after another. Time is
an umpire that can oversee, if needed, a
painting for 30 years. After all, a finished
painting is only a door opening to other paintings.
One of Anders’ goals is that his last work,
through patience and persistence, will be
his best work.

Here is where most of the painting takes place.

There is always music in his studio. There are
moments when a song is playing on the radio as it
was three decades ago. And everything is the same.
Time becomes an illusion. Anders feels the same
as he did back then, the same voice is in his
head, his intentions and desires are the same:
use up all the paint, leave no acrylics to waste.
A drop of paint, squeezed out onto recycled
coffee can lids he uses as palettes, can last
an hour being distributed across dozens of
paintings. He captures shower water warming
up in a bucket to use with his water-based
acrylic paints.His process is an environ-mental
statement unto itself. 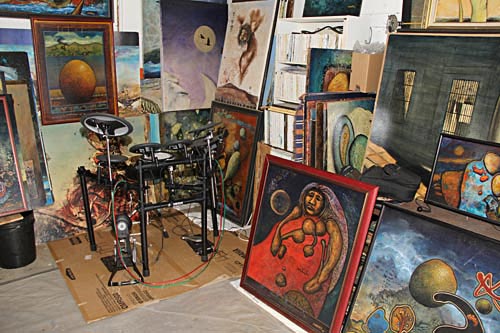 Anders is a direct descendent of the cave painter and drummer, but aren’t we all?

When Anders works on masonite or canvas it is
imperative that the surface is primed, especially
smooth/slick masonite. 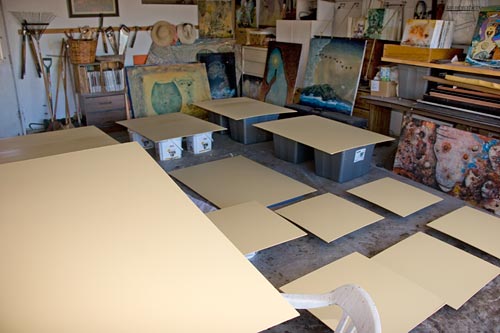 Each of these are a new beginning, a new dream, a new reality.

Priming days are celebrated in the studio.
More is more. More is more experience, more
choices, more considerations, more discoveries,
more insights, more and more… From a
technical point one of Anders’ goals is to
create works that will have a long half-life.
To do this the paint must stick to the surface,
hence the need for strong bonding primers
applied in multiple cross-coats to create
desired working surfaces with tooth/grip.
Priming is an equal opportunity moment. 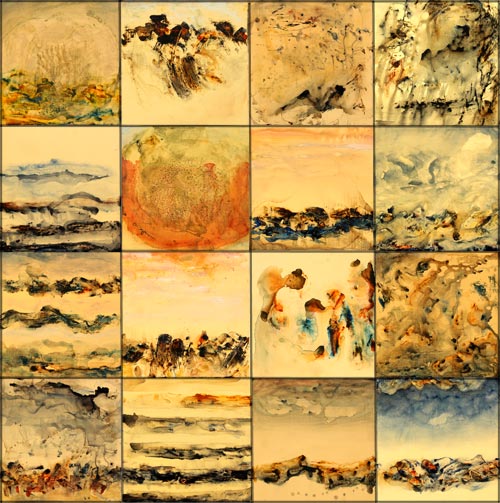 Here are examples of the first sessions, pre-signature, after priming day.

Photos days are another cause for celebration.
All of Anders’ work is photographed after a
sealing session – there are usually three to
four sealing sessions per painting. Anders
looks at each painting as an animated short
that offers the twists and turns each piece
goes through in the pursuit of finding itself.
The photos of works in progress also allow
Anders to look at them from a different
perspective, On the computer he can see the
work in 2d, small or zoom in to study details.
There is distance both physically and
emotionally from the work, The next time
paintings above have a sealing session they
will be signed, signed but not done. The
signature indicates Anders has settled on
an orientation: vertical, horizontal,
top and bottom.

And The Beat Goes On 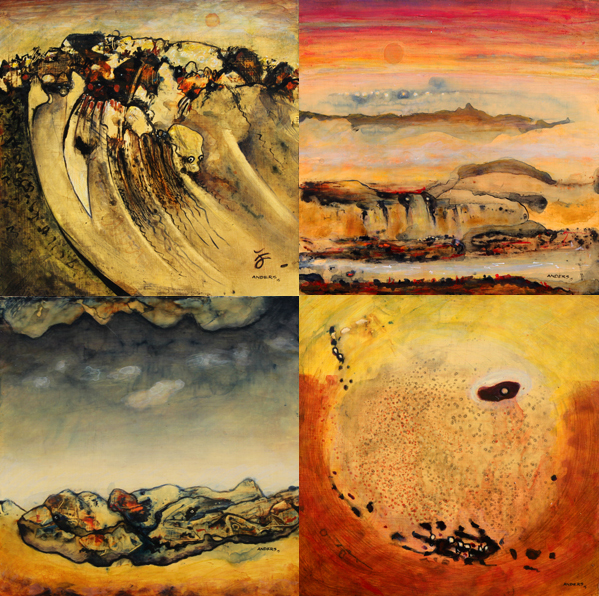 And they move towards becoming complete dreams.

A year has passed and each of the dreams
have taken on new directions with the addition
of elements, colors, forms and mystery.
Anders does not need to understand these
dreams, just as he doesn’t need to understand
all the happenstances and natural sciences
that surround him. When works reach this
stage of development painting can become more
about removing paint than adding paint.
Looking at the work, contemplation, is a key
to unleashing these two-dimensional dreams.

Much of the photography and film-making Anders
does is about his giving in to elements and
subjects around him, to be aware of what is
happening and gratefully accept what is given
him as he works within these hyper-realities.
Outside of his studios, he takes photos of
living creatures and landscapes and feels no
need to paint living creatures and landscapes.
Inside the studios, he controls and enjoys
creating dreams he has never seen before.

Part of Anders’ creative process is to identify
what needs to be saved – meaning no longer
to be worked on, and which areas could benefit
from change. Sealing / isolation days insure
that this is possible. Anders uses washes on
top of washes. These are vulnerable due to
the amount of water that is involved.
Sealing / isolation days insure, enrich and
add an actual physical depth that captures
and reflects light. 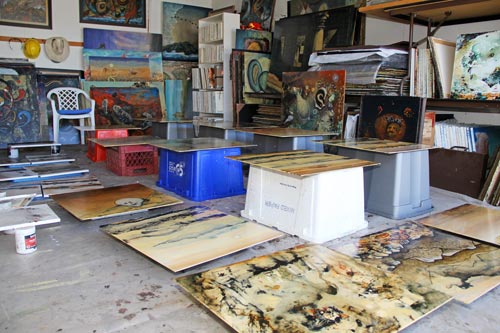 For the past 20 years Anders has used a
semi-gloss for working / isolation seals and,
ultimately, finish coats. There comes a time
that a work is taken off the in-progress
pile and stacked with other “completed pieces.”
Reality is if a work leaves the “completed
pieces,” for some reason, Anders would lightly
sand the finish coat, with 1000 grit sandpaper,
take the opportunity to add or alter elements
and apply the final finish coat. Anders works
with “Time” and “Time” provides
pathways that lead to somewhere. And then it
is time to take photos, again, of the works
and their details. The painting(s) – everything
is done in groups – will cure for a couple
of weeks outdoors, out of the sun and then
rejoin the art stacks: signed,
sealed and delivered. 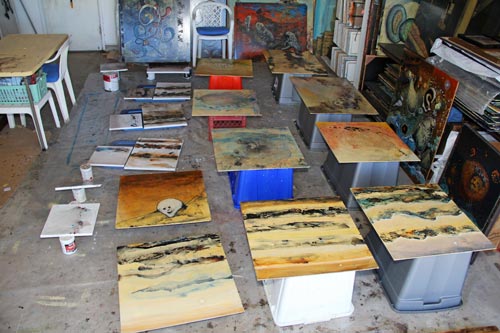 It is a day where one stage leads to another stage.

Where does it all come from? A college art
professor once told Anders that “Anders”
became “Anders” faster because he had not
taken art classes. Since the early 1970s,
Anders has read, enjoyed and studied art
books. These included modern art, primitive
art, Asian, Latin, surrealism, art history,
how to, theory, design, architecture,
calligraphy, landscapes, abstracts,
realism and… At any given time Anders
has at least three art books checked
out from public libraries. 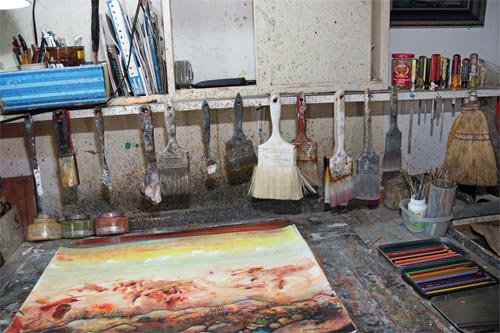 Paint brushes are among the many tools that help Anders.

Time passing is an integral part of Anders’
process. Some of these boards have been
in progress for thirty years. There is
no need to rush. There is a spirit that
comes out of this process, a timeless
spirit. There are paintings that
challenge Anders, but there are no
paintings that he has given up on.
He works until there is a moment
when a dream takes flight and
Anders jumps aboard. 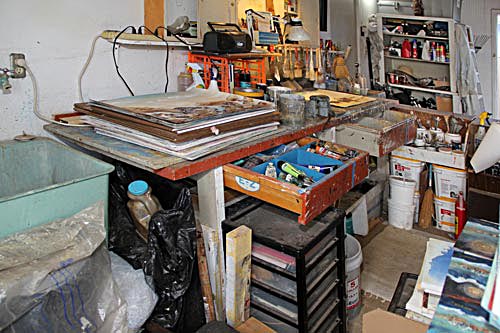 Here is a place where freedom is both a place and way.

1970, group portrait of the first year of painting at a Santa Cruz, CA studio.

The first painting Anders sold was a
board that he had built up in a 3D
shape with plaster and then used
to clean his brushes on. Anders
paintings, on average 100 works a year,
have shared time and space with
photography, music, video, graphic
design, writing and related story telling.

Today, 2018, Anders moves with the
curiosity of an explorer and the
confident agility of a master. This
is what he does. Refining. Reflecting.
Rationalizing. Realizing. Anders thinks
of himself as a traveler on the third
stone from the sun, a simple soul in
a complex world and a direct descendant
of cave painters and drummers.
But aren’t we all? 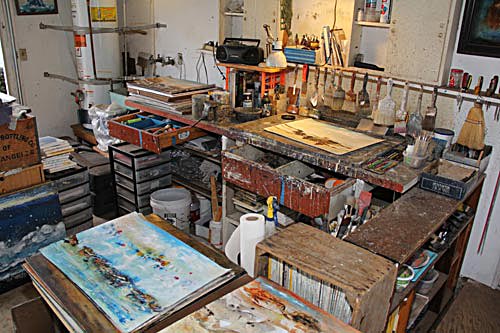 Here realities take shape in the pull of questions and answers.

Anders prefers to paint standing up
or low to the ground. Each day he
comes to the workbench, there is only
one issue on hand: where does today
begin? What board, canvas or watercolor
to start with? What colors to open or
squeeze? Does he start with a brush,
knife, or sponge? This is life in the
art studio. It is a good life.