On modern times, anthropocene and human nature…
Part Three of Three on an Eternal Debate. 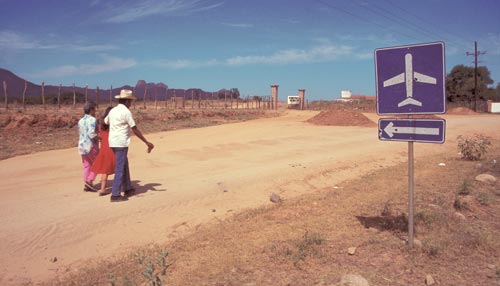 Old and new as a family walks past the airport towards the campo.

The recently revised U.N. population estimate for 2050 is 9.3 billion people A projection for the USA in 2100 is 478 million. Challenging times are ahead but this is nothing new, survival is challenging for individuals and societies of all species.
Driving across the Mexican Sonoran desert on a star-filled 1984 spring night listening to a Hermosillo rock station’s uninterrupted presentation of Jethro Tull’s Aqualung was the best of two worlds. Music is universal. Friends are universal. Traveling is universal. Being is universal.
In the USA there are 78 million baby boomers aged 45 to 64. This is a force of change. They will go where they can get maximize their resources for survival and comfort. How many will leave the USA for retirement is dependent on the USA’s ability to cope with growing pressures and increasing challenges. 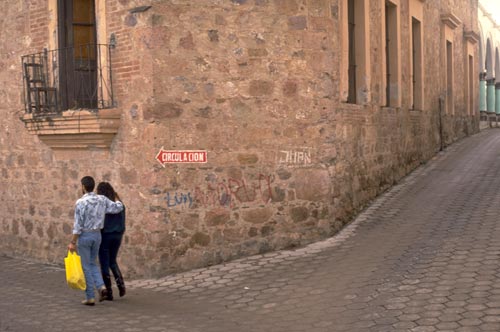 1984, directions and graffiti painted on a school wall along Calle Rosales.

This three part series was prompted by an internet group created in late 2002 for North Americans interested in Alamos. This group, 613 members as of 5-7-11, communicates needs, haves, events, thoughts, desires, alerts, recognitions, questions and answers. Here, at the end of April, 2011 a discussion started about influences that are changing Alamos. It began with a post by a recently arrived American who had started a dance studio in Alamos. She was coordinating a community participation dance, as part of an international event, to Michael Jackson’s Thriller. Another group member responded that this was inappropriate and bad for Alamos. A digital conversation with several North American members began: who is doing what to whom? Why, what, when, where? How? 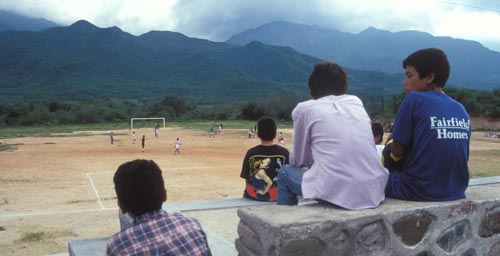 A tale of two T-shirts, one celebrates Selena, the Queen of Tejano, born and raised in Texas and a superstar in Spanish speaking countries. Shortly before the release of her first album featuring songs sung in her native language, English, she was murdered by her former manager. The other shirt promotes the American dream, everyone own their own home. Unrelated but related, today, the world’s largest military, and consumer of oil, is the United States. It spends nearly as much on its armies, navies and air power as the entire world collectively. Meanwhile, the Mexican army is engaged in a war with ruthless drug gangs fighting, with weaponry smuggled from the United States, over distribution routes to meet growing heroin, cocaine, meth and pot market demands in places like Fairfield, USA.

5% of the world population speaks English and 5% speaks Spanish. There are 50.5 million Hispanics in the United States, 14 million in California and 4.7 million in Los Angeles County. On Cinco de Mayo, 2011, a presidential commission declared a need for a museum devoted to Latino and American history. A Smithsonian study in 1994 stated that Hispanics were the only major contributor to American civilization not recognized in the museum.

Here is Alamos, east to west, on a spring morning from the north.

At one time, the 1770’s, there were two to three times the population as seen here in 1996 which is half the population of 2011. When I first visited Alamos there was talk of building a freeway from Navajoa through Alamos to El Fuerte and Sinaloan farm land. The United States was interested and engaged because food would arrive in Southern California hours faster. Since I last visited, roads from the west, Navajoa, and southwest, Masiaca, are new or rebuilt. Now it is easier and faster to drive to Alamos if one is headed north or south on the Navajoa-Las Mochis section of Highway 15. Roads are a major stimulus for change – expansion both at the destinations and en-route. Once there was Indian foot paths and then El Camino Real and now improved auto routes to, and through, Alamos. Pave it and they will come.
One can only wonder what the population of Alamos, Sonora, Mexico will be in 2050. 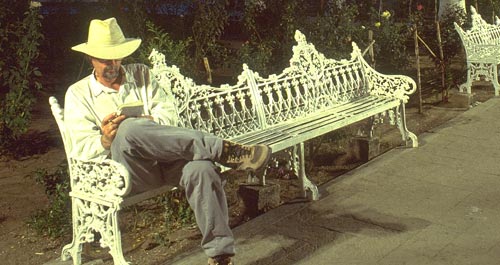 Human impact on planet earth is equal to population times affluence times technology.
A climate change report commissioned by the Vatican, issued 5-5-11, indicates there are three things we need to do: “reduce worldwide carbon emissions by stopping deforestation and other initiatives: reducing the amount of warming air pollutants such as methane and soot by as much as 50 percent, and preparing for chronic and abrupt changes that cannot be avoided.” No mention of population. It is human nature to promote growing populations, this is a “healthy” economic condition. Cities with growing populations are doing well, cities that are losing people are in decline. New homes being built is good, ghosts towns are bad. This human nature was present yesterday when we lived in caves and present today in urban super-sprawl. And tomorrow?

In my mind, the big issues in the future are women’s role in society, abortion and sex-education. I know these are long standing ideological battles. It is human nature to reproduce to save-replace oneself and the species. We will be dealing with Anthropocene consequences because stopping population growth is the same as trying to stop a super volcano from erupting, or is it?

From the Alamos Journal.