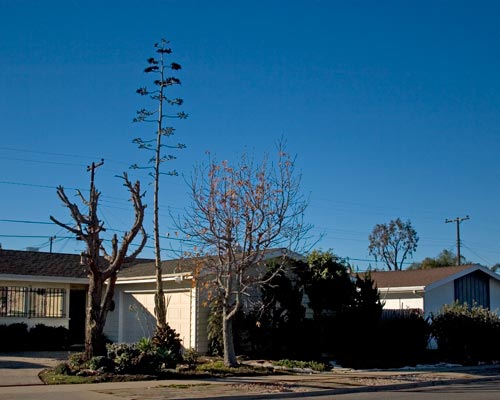 December 2012 had been a cool wet month. An arctic cold front with high
winds is in the forecast for the coming days. The century plant bloom
had been drying out for months, all the water stored in the spire surely
must be gone. The tall spire was now a danger if it were to fall by
itself on the house, a parked car, the driveway or a passerby on the
sidewalk. It has become time to cut down the spire, hopefully with
no unintended consequences.

Today is the day to cut the century plant bloom. 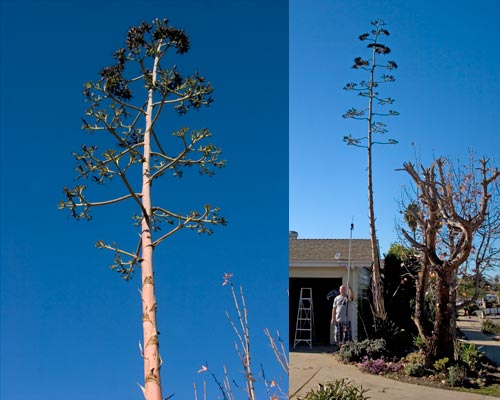 “C’ day has arrived. All amazing things do come to an end. Jeremy Brogan,
who lives a couple of houses down the street, came over to help me with
the cutting. I wanted to document the event and give human scale to the bloom.

The plan was to cut into thirds. 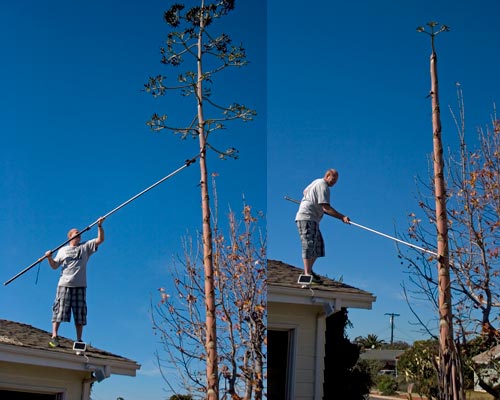 With simple tools, a pole saw and ladder, the goal was to fall the bloom
in sections and minimize unintended consequences. 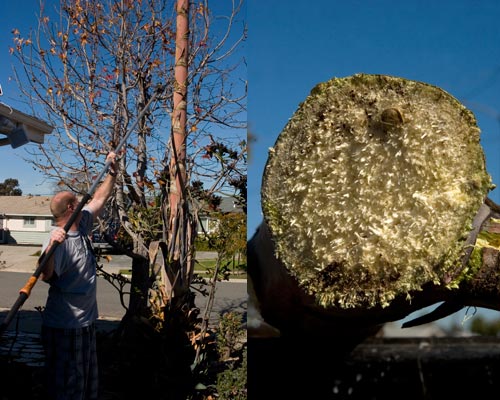 The top section was cut from the roof and fell into the liquid amber tree.
No damage done. The second section cuts started on the roof and finished off
from the ground. After repeated sawing, a push brought the section to earth.

A Time for Measurement. 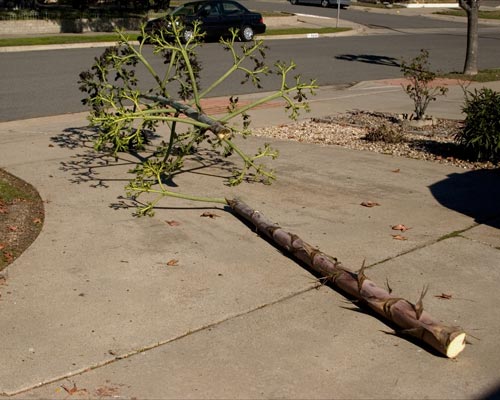 The agave century spire stood 32 feet 3 inches tall. The spire’s girth at its
base was 32 inches. Nature is all about change, The century spire was
all about continuation by distributing – broadcasting its seed. 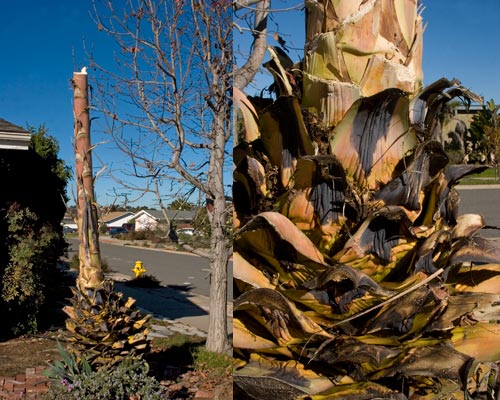 Work begins on removing the bottom of the agave plant.
My 12 inch handsaw cuts through the spire with relative ease.

The spire has left the room. 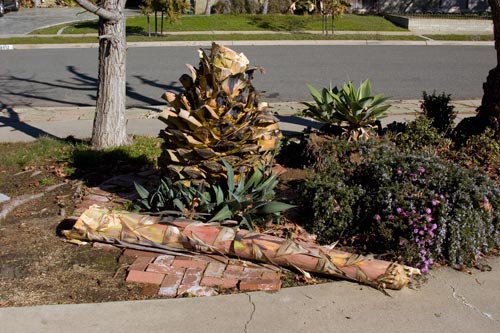 Was the falling of the agave felt in China or sensed in Australia? 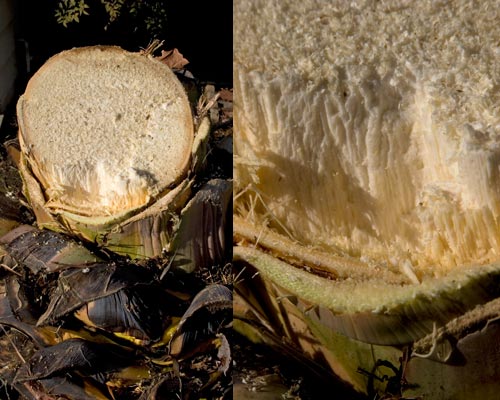 The white center core is light-weight, reminds one of a sponge.

Have some agave cake, great with tequila. 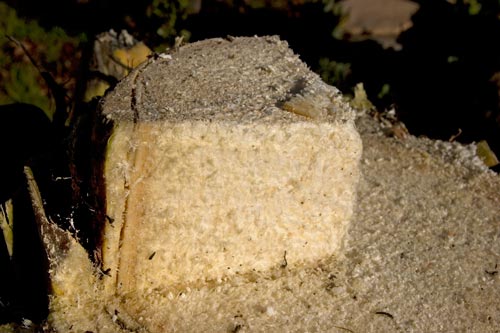 Removing the agave stump has begun. Everyday about four inches will be
removed by cutting from the top with two cuts four sections that will then be
removed with side cuts. One quarter at a time. 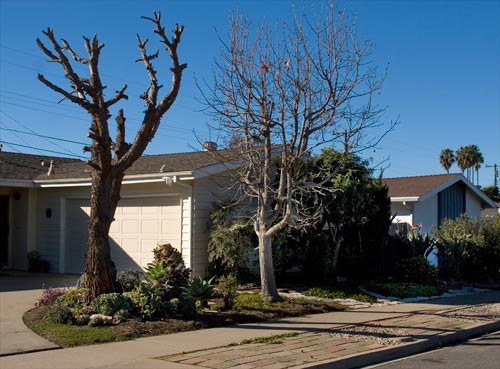 Compare this with the photo below, the first photo posted in this story. 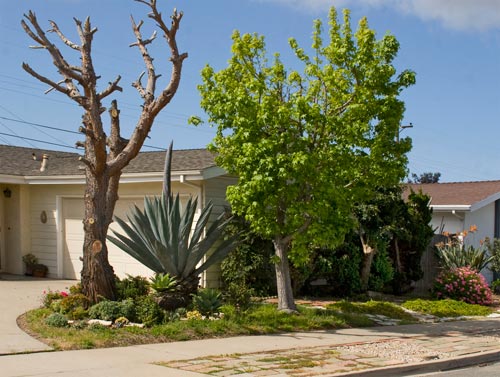 This large cactus, Agave Americana, also known as the century plant,
maguey or American aloe, is starting to bloom. April 12, 2012 and we are there.
I look forward to documenting the entire process. Visitors welcomed.

And this was the top 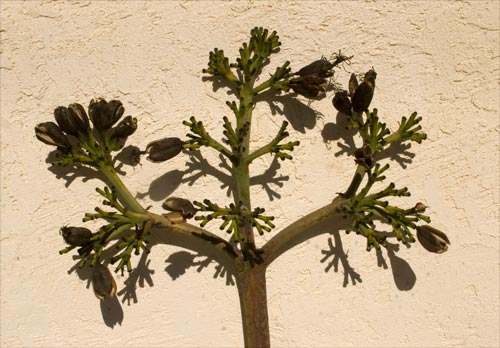 It was all about the seeds 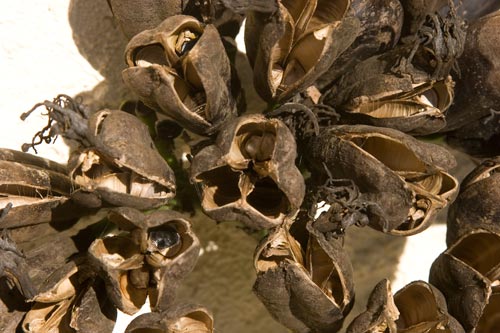 From these pods came the seeds that by wind, birds and insects
promised a next generation.

And then the seeds pods were gone 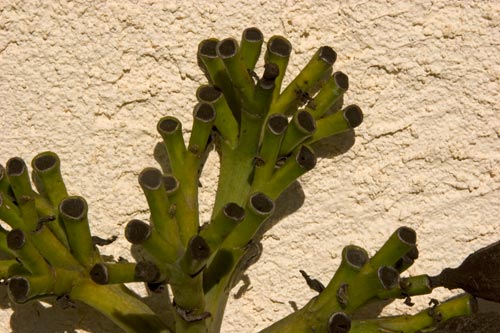 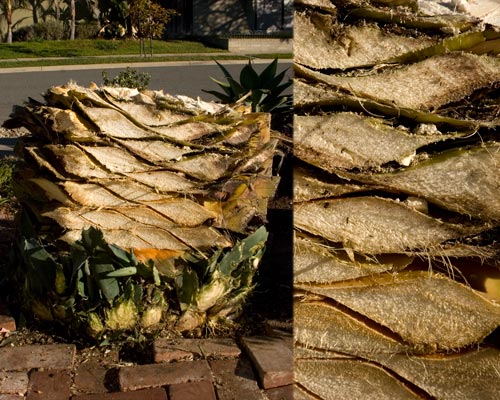 Cross section of leave pattern on the stump’s south-side. 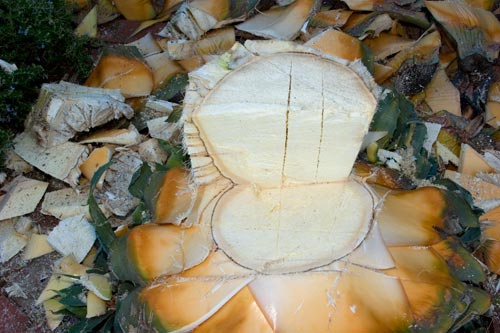 Two dimensions of a cross-cut through the trunk. The base of cut
leaves-spears reminds me of a giant mushroom.

A closer look at the inner structure 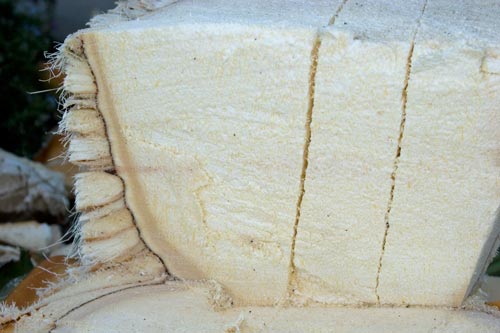 I wonder how people of an older day used, if they did, the materials that
are part of the century plant. 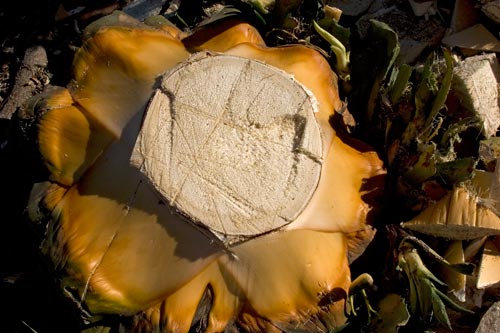 The golden reflective colors are heavenly against the white core.

Elements of the removal process 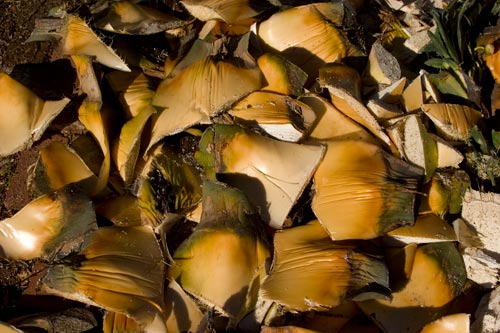 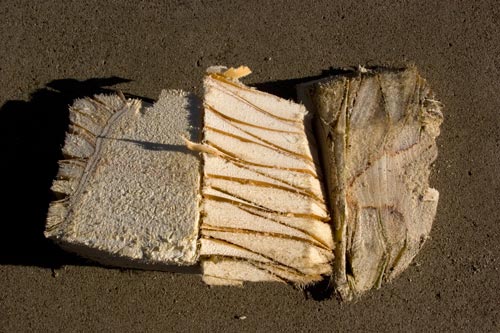 Agave pastry all in a row. 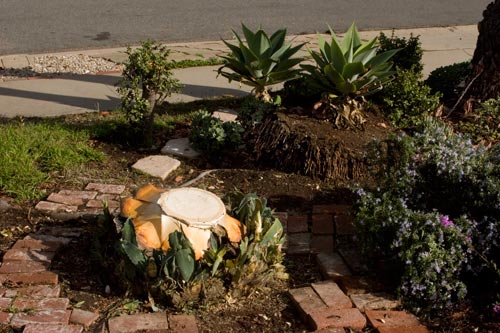 Slowly the agave is being removed.

10 inches in diameter, years in growth and survival 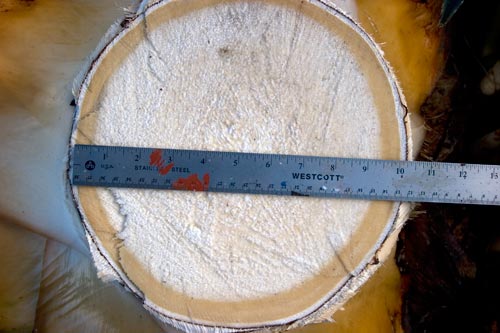 Cutting through the trimmed agave spears is starting to hit black rot.
I found what i think was a newt and numerous spider nests.
It is a dark world inside at the base of the agave. 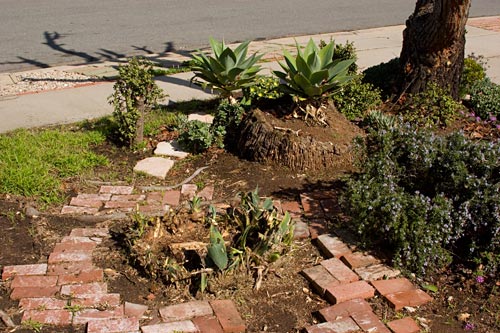 There is now little left but the emerging shoots
that surrounded the main trunk.

From the old comes the new 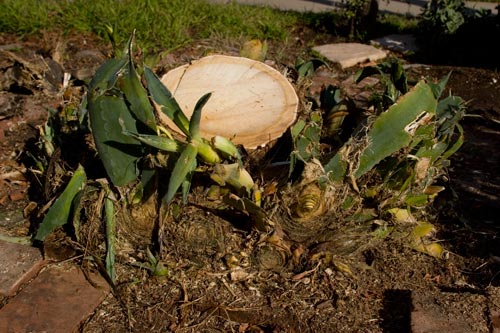 Oh what a tangle the agave grows to ensure its
presence in days to come.

Up close and personal with the end 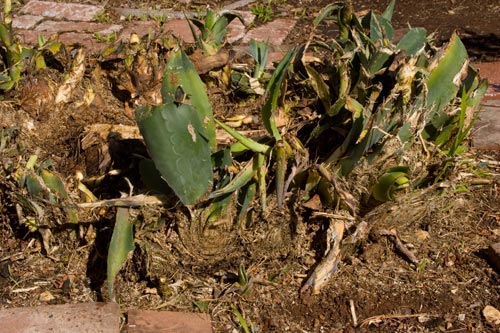 How long will these continue to grow from the trunk?

One spear could become another century plant 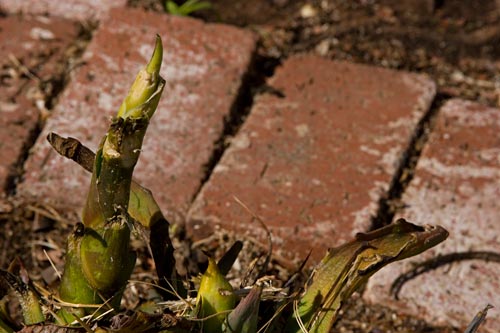 This agave century plant was all about energy.

The above ground trunk is gone 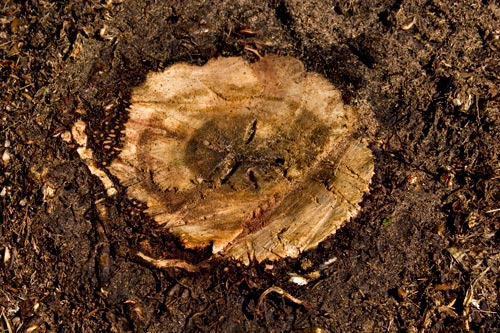 The last cuts were some of the hardest.

Change has come to where the agave once stood 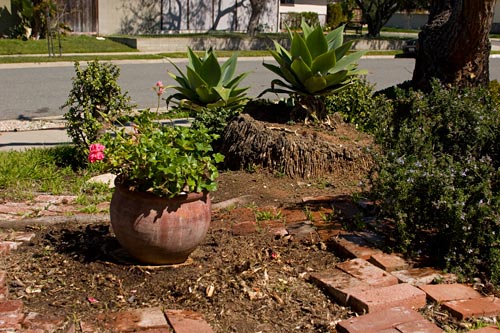 A garden of geraniums will replace the agave century plant forest.
More color bowls will join this one. The plants will drink captured water
from the kitchen and bathroom. Goodbye old agave century plant.
You were a good neighbor to all who knew you. You grew over the years,
bloomed and died with a glorious last hurrah.

Back to A Time to Decay.
Back to Century Plant.