Lava Dogs and Dancers
Lava Dogs moved with the ease of restless tectonic plates. They came with summer snow melts and left driven by low winter sun angles. Habitat in this brittle biosphere was where they camped. Carcasses were coins of the realm. Bones were bog cleaned and traded as jewelry along with strings of decorated dung. Pre-historic Lava Dogs were light blind. They had elaborate fake eyes that would eventually evolve into functioning image capture cells. 40″ x 31″- acrylics/masonite.

After the Fires and Floods
It is December 2017 and Anders is producing a series of 240 acrylics on 24” x 18” watercolor paper. Many of these works have been in progress for a couple of years and now they are reaching their conclusions. These are images that speak of a coming era where and when Homo Sapiens are a thing of the past along with all their behaviors and tribal rituals. Evolving life exists and the earth continues to breathe, adapting with each breath in a cascade of variety and intent.

Cosmic Migration
Here are selections from a series of 30 artworks painted on masonite panels that were rescued from a construction site before they were thrown into the garbage pile. Anders will let the viewer decide if his efforts reflect added value to the discarded. Humans are dealing with Human Nature, it is all they can control, and that is in doubt. Cosmic Migration’s time frame mirrors geese on Earth. Migrations are an Universal Truth, all bodies are in some stage of migration.

Terrestials
These are many sizes and colors. They are about the Magmamatics of heat, gravity, time, pressure and energy. The physical techniques used in these paintings become the subject: as wide as the oceans and as deep as the earth. Life rides upon a ever traveling and shuttering crust. Come AD 1,000,002,018 life on earth will have given way to a sun growing hotter each day, if days still existed. In the terrestial moment balance is hard to maintain with competing forces challenging the present. 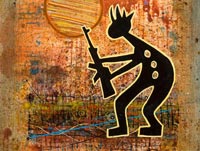 Sun Light
This series, painted and completed in 2010, are acrylic on canvas. Energy is always there, coming and going with the solar breezes and beyond – way beyond to the very beginning and to the very end. All we can say is “we are here.” We always wonder are we here alone in space, riding this cosmic beachball, surrounded by expanding dark energy and hitchhiking light years. Time doesn’t stand still. Truth is seen from various points in space each a mirror with no reflections.

Art Tars
38 Art-Tars, moving and grooving in celebration of spirit and color, treat viewers with respect. The series goals was too move the eye across the surface like a cultural pre-electricity arcade game and have bright colors heighten the visual excitement. These are as close to Kandinsky that Anders will get. A nod to Miro, Tobey, and Chagall, and many others, is in order. In the past rest tomorrow’s bones – it is eventual. Shapes in motion. Translating paths. Points of focus.

SpiritScapes
These are texture tales of evolving flora, fauna and geology/geography. Texture is part and parcel of all that can be felt on any level: emotionally, metaphysically, subconsiously, rationally… SpiritScapes are also color tales of high noon rainbows and full moon shadows. Here, doorways have no doors and experience has no reference points. Line plays a critical role in where the eye should or will go. Thick lines. Thin lines. Everywhere, “depth”, has a beginning, a middle and an end.

Chiloquin
It has been a hard life living off the land of the Three Rivers. Food and water comes and goes as do the seasons and climatic cycles. Flora and fauna comes and goes with the food and water. Interconnected. Dependent. Exploring. Survival. Pressure was a key creative force in forming these paintings. Elements of thick wet paint are mono-printed onto several panels. The results are patterns that are the same as looking at Planet Earth from space.

Relationships
Attraction is a power force as is the equal and opposite forces of unattraction and disaffection. “Relationships” bulids upon interlocking silhuettes that merge as one and at times seperate into individual spheres of influence.
There are 18 paintings in this series. All are 24″ x 24″ inches acrylics on masonite. They began in 1983 and most have been completed by 2010. Three are still in progress. Echoes, reflections, mirrors images and overlapping are elements at play in “Relationships.”

Recycles
First rule of Recycles, 36 paintings, was to recycle his paint refuge and incorporate them into a series. Recycles became mixed-media pieces with all the media being his paint or tools. Another rule was to let the masonite panels show through layered washes and applied media. The water used for washes and cleaning brushes came from collected shower warm-up water. It is nice to be nice and caring to be caring. Reuse. Renovate. Reshare. Resource. Reanimate. Return. 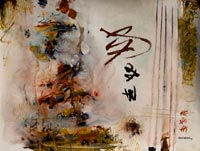 Lost Languages
A large series, 56, of acrylic on watercolor paper paintings. Each is either a 24″ x 18″ or 20″ x 16″ sheet. These works freely flow with colorful movement. Cryptic marks speak of other things, other places, other times. Lost Languages begin with gesture. Physics dictates form. Anders watches with profound amusement. He listens. A personal calligraphy emerges speaking of another place or era. There is the illusion of a wind out of the west from the east.

Warriors
These are a few of several hundred paintings, mostly on masonite, where Anders has left a human form to draw upon our attention. These cartoons have souls born of lyrical abstract impressionistic roots: head and shoulders, freaks and demons, flora and fauna, conspiracy and conjoining. These have steady eyes focused on the viewer. At night they share stories amongst each other about the violent homosapien.

Characters
We come and we go: phone numbers in the dust, selfies in the wind. These are a growing group of acrylic “portraits” on canvas. Shot scales may vary but the characters are always present and driven from here to there, and back again, with imaginative brush work. These are quiet characters. They may appear to be alone but they are never alone. There is an internal colusion manifesting actions and purpose. We cannot not avoid being modern. 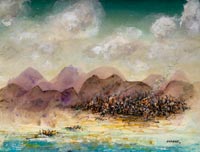 Apocalypse
This large acrylic-watercolor series has been documented in detail during the creative process. The intention is for Apocalypse to become an animated clip illustrating the concept of “where do we fit into the scheme of things and time?” We are watching what were considered as unchanging change. Our habits are seen by some as our undoing. Somewhere the next homo species has begun to evolve. They will be smaller, cooler and need less water and food.