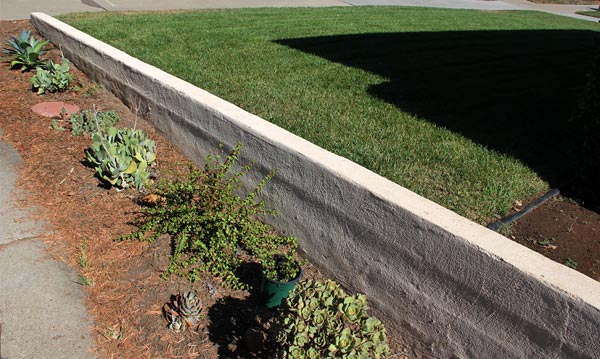 Give Succulents Dirt To Grow In and They Have A Home –
Denver’s landscaping project started on the strip of land between his driveway and the neighbor’s newly installed lawn. The succulent cutting, as succulents do, survived the transplanting and flourished.

A Tale Of Two Yards and Two Aesthetic Assumptions –
The lawn behind Denver was planted recently to replace an elderly lawn. A new lawn’s water needs are dramatic. Daily, water was flowing off the lawn into the street. This was happening while local and state politicians struggled with the impacts water restrictions would place on  economies. How can we grow if it is declared we do not have enough water to supply our current daily habits? It has been written that Southern California has a native supply of water, in a wet year, to support 800,000 people.
The current population is 22,000,000. 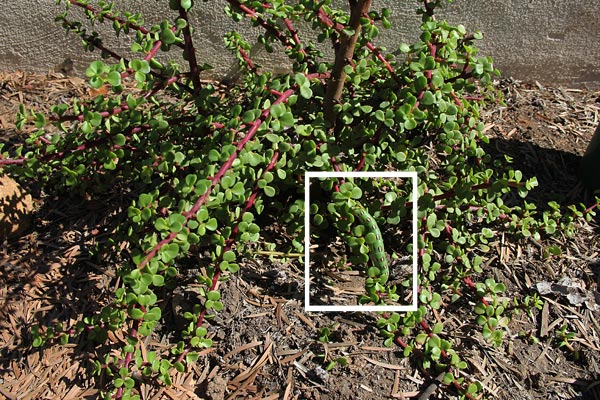 This Amazing World Is Made Up Of Inter-dependent Flora and Fauna –
Denver pointed out an interesting caterpillar (talk about color-coordination and camouflage) that was hidden on one of the transplanted succulents. He thought the caterpillar had come over with the cutting but Anders is sure this wasn’t the case, he had never seen anything like it before on any of his garden’s succulents. 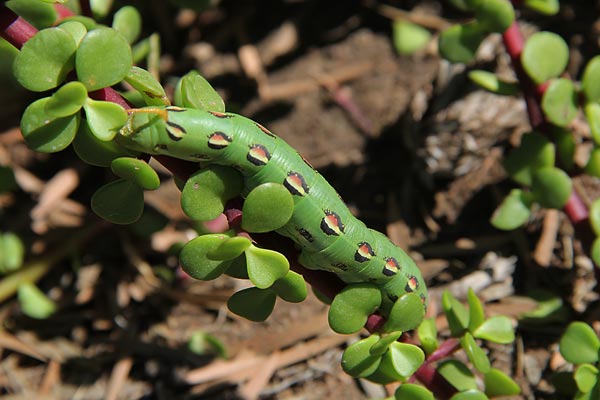 Here Yesterday and Today, Gone Tomorrow –
Anders returned in two days to take these photos. The caterpillar was out on an extremity basking in the sun, a perfect setting for a formal portrait. The next day it was gone. Where did it go? Was it turning into a butterfly? Was it a protein-rich meal for another creature? All we know is that all creatures, great and small, come – and all creatures, mighty and weak, go. 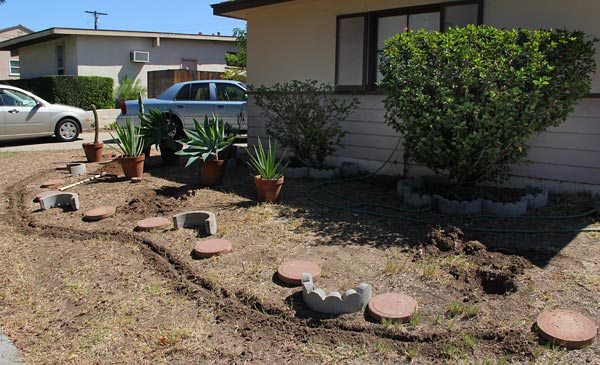 The Dirt Brothers, Anders and Denver, Started With A Loose Sketch –
The first design goal was to capture as much front yard water runoff as possible. The concept of tiers was on the design board. At the time, creating tiers seemed a difficult task given that the hard clay, with little topsoil, was baking in 2014’s dry-hot conditions. Each month passed by with no rain, and each day had higher temperatures than what was considered “average” for that day. Tiers would require labor.

It was agreed that the yard would feature a variety of succulents as opposed to a traditional gardening plan that would repeat a smaller select group of plants to create a coherent design. Allied Gardens would be more a demonstration – celebration of cactus and succulents for the many passersby on foot, bikes, scooters, skateboards, wheelchairs and passing cars. Anders and Denver both thought it would be cool if folks would take cuttings, as the succulents grew, from Allied Gardens for their own yards. 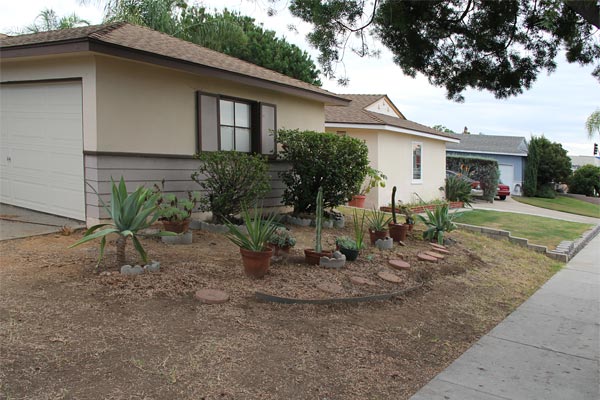 The First Tier Was Easy To Establish –
Denver had purchased a ten foot section of 3″ tall edging made from recycled materials at a yard sale. Anders purchased 10′ of wood edging material that did not bend easily. Together they described the first tier. Dirt was raked and gathered to raise the ground level behind the edging on the house side. No digging was required. 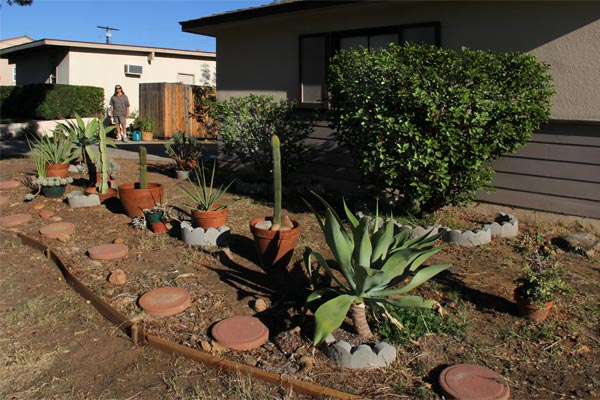 Cactus, Succulents, Pots, Pavers, Dirt, Edging Material –
The number of collected cactus / succulent specimens was growing. For the time being they stayed in pots. Round pavers were spread across the ground as design elements and as placeholders for where plants could be planted in ground.

Dirt As A Design Element Like Lawns Of Old –
Denver had mentioned several times that a neighbor had a front yard of dirt that she raked daily. In Mexico, yards were raked to keep weeds from getting a foothold in loose soil. Japanese rocks gardens had always intrigued Anders. Allied Gardens was free to adopt its own nationality. The plan was open. Dirt will be the background-frame for the vegetation. Social mores promoting manicured lawns instead of existing Southern California dirt is a peek into anglo-saxon bias that goes back to English gardens. 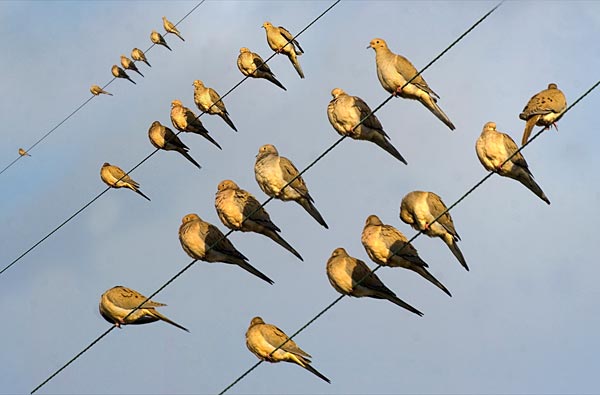 30 Seconds Above The Backyard –
This composite photo comprises four moments shot at three different shot scales over 30 seconds. Doves congregate on alley utility lines behind and above Denver’s backyard. Anders’ garden is five plus miles away by automobile. The roads descend one mesa, across Interstate 15, climb another mesa before descending to the San Diego River. The road to Denver’s climbs another mesa. Allied Gardens is on this mesa. As the crows flies (which is a strange saying because crows do not fly straight) the gardens could be less than three miles apart. Serra Mesa, where Anders lives, has mocking birds galore and he is amazed that he does not hear mockingbirds in Allied Gardens.