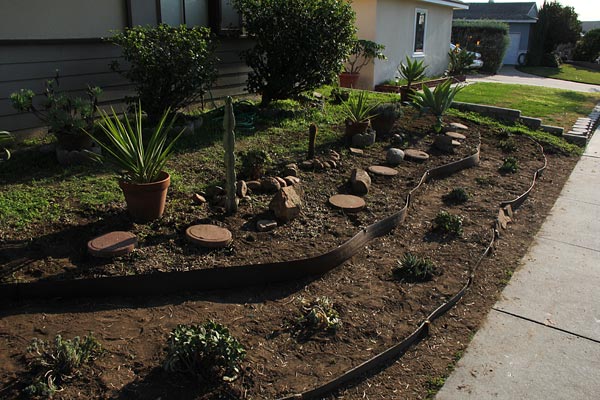 Accountants Put Down Their Jelly Beans and Totaled The Project’s Costs –
Anders purchased a 40′ long by 5″ tall edging roll for $20. This brought the project’s material costs to $23 including tax. To lessen the carbon footprint on this garden project the edging material was ordered on line and delivered to the store that was on the way between Denver’s and Anders’ homes for an in-store pickup. Other cost related to the project were a couple bags of organic soils, a hose and a shut-off nozzle. These cost around $50. At this point the total cost for Allied Gardens approached $75. 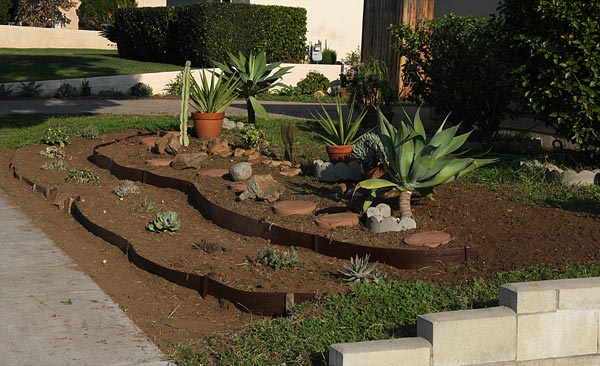 Late In December 2014 The Rains Came –
With a roll of edging material in hand, and garden ground softened by recent rains, work began on a second tier. This would require earth moving because the tiers – terraces are 2″ taller. The running terrace length had  grown to over 50′. The moist smelling dirt was soft, cool and easy to weed and redistribute. Rocks were added to the upper tier and cactus / succulents are planted in the ground of the second tier closer to the street. Allied Gardens as a garden, and as a multi-media project, had started to find their own forms and vernacular. Waiting for rain, before dealing with the second tier, demonstrates how rain is an agent that works in many ways. 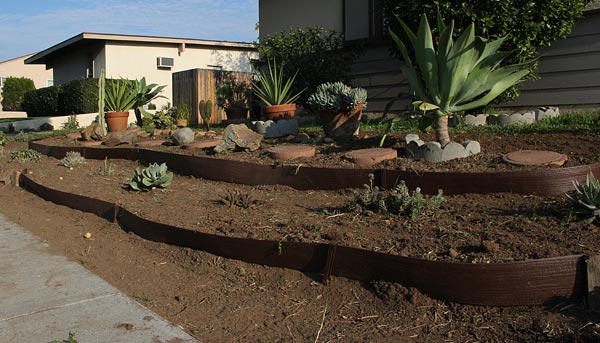 The Original Slope Now Has Three Levels –
Allied Gardens foundation is coming together through trial and error with lines being punctuated and accented by succulent notes. Sonic Succulents is coming together in much the same manner. 14 tracks were laid down in one studio session with two passes by Anders on drums and percussion and Denver on keyboards. Later, another session found Denver adding another keyboard track to 11 tracks. Anders then re-edited the drums and percussion. Now, the elements are ready for another overdub session. Then, the mixing process, along with additional ambient elements, will commence. The sonic tiers and terraces are being built in the same protocol as Allied Gardens itself. Along the way, implications and place holders occupy time and space – what was once a round paver is now a succulent bed. Where once was drums is now the sound of two feet and a cane on the sidewalk or rain hitting pots in the garden. Sonic Succulents and “Allied Gardens” are becoming each other. 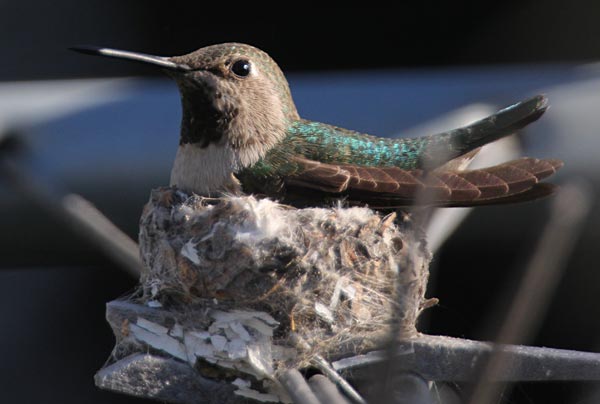 A Visitor Builds A Nest In The Backyard –
A hummingbird created a nest in early February on a clothes line in Denver’s backyard. It is open to the elements and predators who can watch from surrounding trees and utility lines. One egg fell to the ground when clothes were removed from the line. The female hummingbird has been sitting on this nest through March 17, as this is being written. She has prevailed through high winds, a couple days of rain and a heat wave. She has a baby hummingbird in the crowded nest.

It Is Wise To Build One’s Nest Near Food and Water –
The hummingbird visits two plants of this succulent variety on the property for nourishment. Anders thinks she built her nest here because these succulents would flower as she sits on the nest. 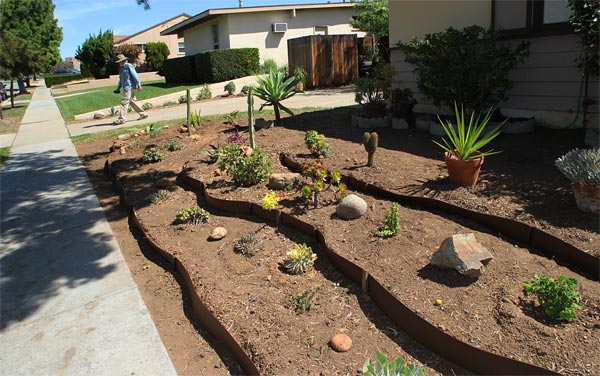 Rains and Another Roll Of Edging Material –
Anders ordered online another roll of edging material and a few days before its projected arrival at the store for pickup it rained. Anders thought of the hummingbird on her nest and how again the earth will be softened up for shaping another terrace. But it was not to be. The roll was defective and sent back to the manufacturer and the order was reordered. The store informed Anders there would be no charge for the roll.
The project’s costs remain at $75. 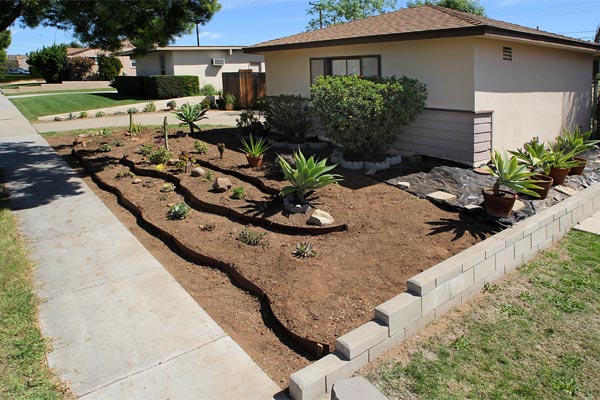 And This is How the Foundation Became the Foundation –
Allied Gardens was organized during six work sessions, averaging three hours, over the course of a year to the day. The estimated labor to get from bare ground to three terraces was 18 hours for both Anders and Denver.  These were 18 hours of exercise good for body and mind.  March 12, 13 and 14, 2015 were hot, part of an unprecedented March heat wave. The ground was hardening fast, but still there was enough moisture to make garden work easier when the new terracing material was put in place on March 12. There was now 80 feet of tier edging creating three terraces. 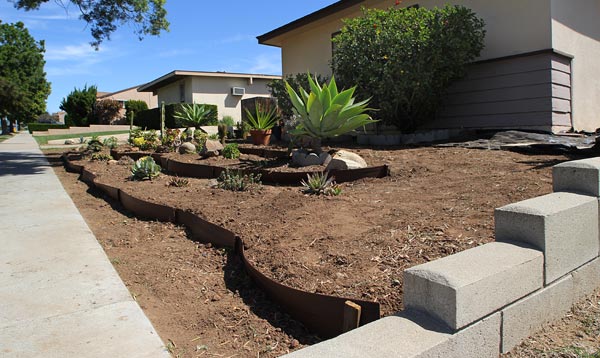 It Is Allied Gardens’ Formal Portrait Day –
March 14, 2015 was going to be a hot day. Having looked at photos from the previous day Anders and Denver spent a couple of morning hours in the shade weeding and rearranging elements for the sake of a portrait. As an example, the hose was hidden away so as not to attract attention away from the cactus, succulents and terraces. Weeds on the edges of the yard were removed, again to bring focus to the garden elements: dirt, cactus, rock, succulents and terraces. These are some of the portraits showing stage one of Allied Gardens. This is the way it was and we were there. 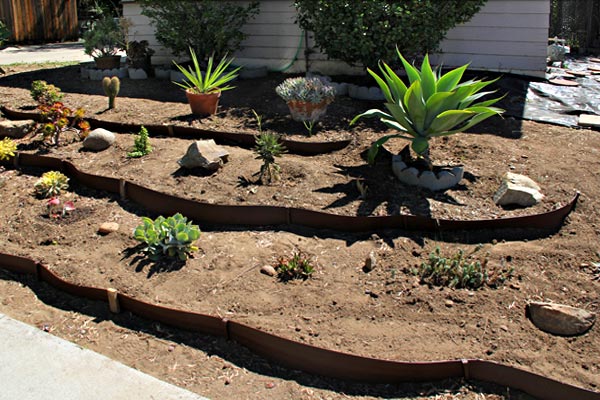 What Is Next For Allied Gardens and Sonic Succulents? –
Allied Gardens the garden will have its elements grow. Grow to the point where they will need to be trimmed which means there will be cuttings available for other gardens in the neighborhood. The weed load has been greatly diminished during the terrace building process. But weeds are weeds. So weeding is in store. Allied Gardens, the film project, will need to film the succulents as they grow and watch and listen to the passing people, birds, cats, dogs, insects and other mammals that pass by. Anders wants to time-lapse the plants shadows during the course of a day and film the passing traffic as if it were a fast moving river with stoic cactus, succulents and rocks in the foreground. What does Allied Gardens look like at night as headlights reflect off terrace edgings or in the rain or by full moon light? The flowering of cactus and succulents has already been documented in great detail in Anders’ garden. The film also awaits the Sonic Succulents audio tracks. Book two of Allied Gardens has begun.