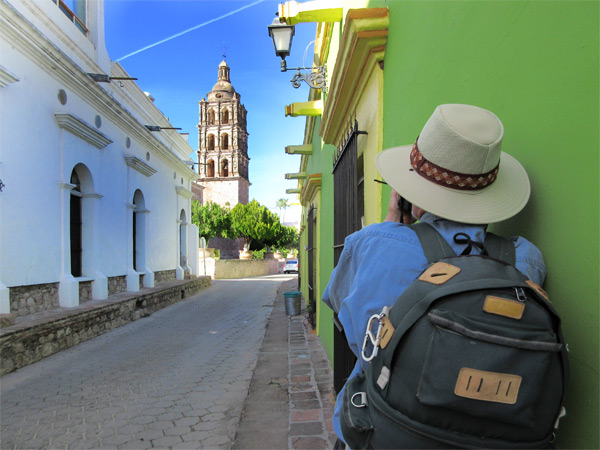 Time does not stand still but spirits never leave.
It had been twenty-some years since Anders Tomlinson,
cameras in hand, walked the streets of Álamos, Sonora,
México. This collection of photos of a day in the life
of Anders are by Antonio Figueroa.

There have been changes in Álamos since Anders last visited.
Influences and multiple causations included a copper mine to
the northwest and a silver mine to the southeast opening up,
2008’s Hurricane Norbert, La Fuerza del Destino Mexican
telenova-soap opera filmed in Álamos and airing in 2011 and being
designated a Pueblo Magico by the Mexican Government and
tourism industry in 2005. Over the centuries Bishop Reyes
Cathedral, the subject of the above Anders’ photo,has stood tall.
Álamos, like the world, has grown in population and cars. 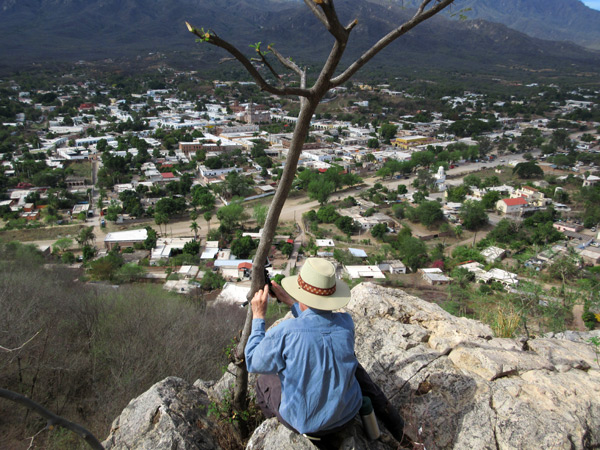 Anders attaching a GoPro Camera for timelapse of Álamos.
It is also true that Anders Tomlinson has changed in the two
decades since his last visit in the summer of 1996 to Álamos,
Sonora, México. The biggest change is that he is 21 years older
and these are years when the changes in body and mind are
accelerating. In these years technology has changed influencing
how and what he uses to document. Anders, above, is attaching
a GoPro camera around a tree trunk with a wrap-able mini-tripod.
Colonial Álamos lays before him in all its granduer. This trip
would help Anders understand how much his “eye as the beholder”
has changed. He still approaches projects with the same focus
to document and preserve data for the future to look back on.
He stills marshals inclusiveness overvalue judgements. Álamos
continues on as it always had. 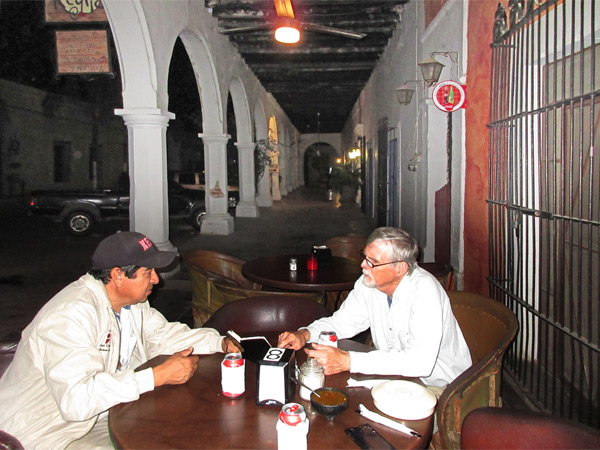 Anders and Museo director Tony Estrada outside Reyna’s.
Somethings have changed little over the years. Tony Estrada is
still the director of the Museo Costumbrista de Sonora.
He has been in this position for 33 years. He is well-respected
in this capacity and is also known as an artist-sculptor.
He and his wife Lupita, herself an artist, also manage Galeria
Rincon de Arte in centro Álamos one block south of the Plaza. 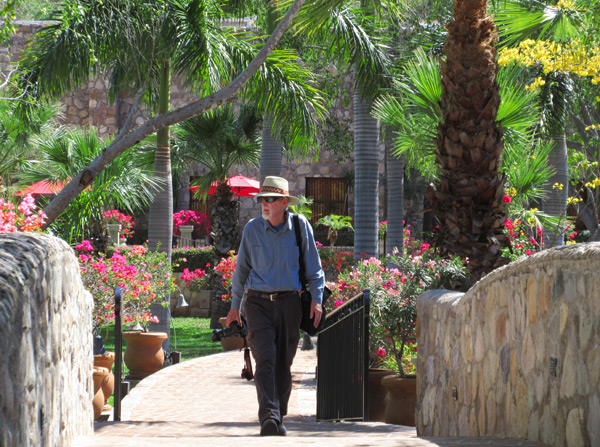 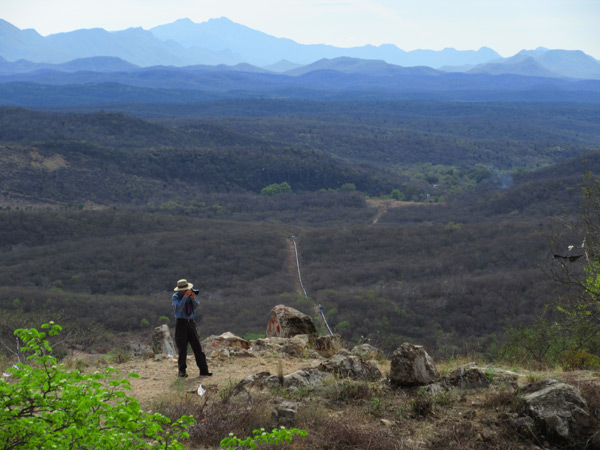 To the east are Sierra Madre rising foothills.
Much had happened in Anders’ life since visiting Álamos in
the summer of 1996. He found himself in the Upper Klamath Basin
during the 2001 Klamath Irrigation Project water shutoff that
impacted both Klamath Falls, Oregon and Tulelake, California
and made headlines around the world. This became a period of
intensive film production including a film featuring Jimi
Yamaichi and the Tulelake Internment – Segregation Center.
This would bring an end to Anders’ traveling days and he
returned to San Diego in 2008 where he remained until the
much anticipated 2017 Álamos Sonic Expedition. 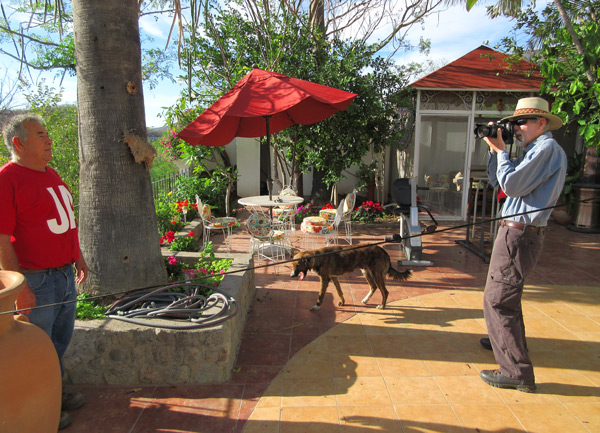 Anders and Rigoberto Grajeda do the portrait dance.
There were many questions in Anders’ mind when the 2017
Sonic Expedition crossed the border into Tijuana on
February 21st and hopped on an overnight bus to Navojoa,
Sonora, México. The major issue would be how well would
Anders travel. Since 2008 the longest trip he had taken was
24 miles and had slept every night in his own bed. His health
required three hours of daily exercise and maintenance and a
restrictive diet. Folks in Álamos helped Anders including Rigo,
seen above, who cooked several meals at Casa Serena Vista
that Anders shared and Rigo also drove him a couple of times
to film the streets and roads of Álamos. With help from Joan
Gould Winderman, Diane Carpenter, Antonio Figueroa,
Luis Angel, Jim Swickard, Humberto Enríquez and
others Anders was able to accomplish many of 2017 Álamos
Sonic Expeditions’ project goals. 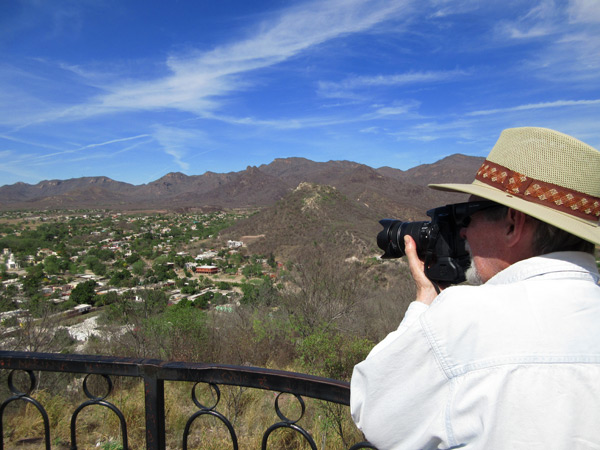 The Mirador’s view is 360 degrees of living Álamos.
The Mirador had changed greatly from Anders’ 1996 summer visit.
It is now a destination unto itself including a restaurant.
A walking path, 360 steps, from downtown brings one to a large
modern observation platform. There is a sidewalk along the road
all the way to the platform. It is an example of the fine rock
work that has been accomplished across Álamos from the
arroyos to El Mirador. 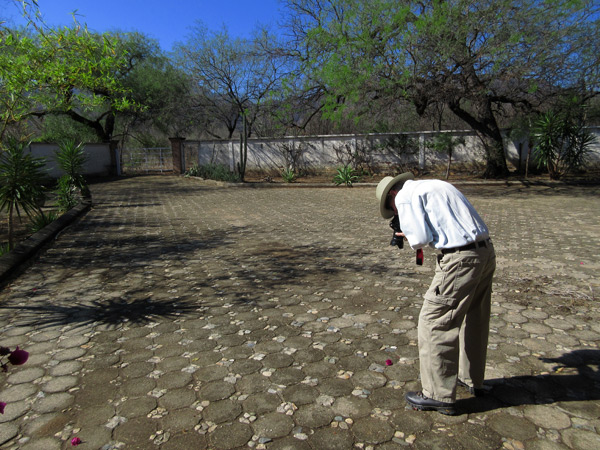 Anders looks at the world in terms of shot scale – macro to micro.
Shooting stills or video for a narrative requires awareness of
shot scale to move the story forward in an entertaining manner.
Most of the gear Anders used on the 2017 Álamos Sonic Expedition
shoot was new, small and produced 5,354 photos, 783 videos and
202 audio recordings. Truly a treasure trove for post-production. 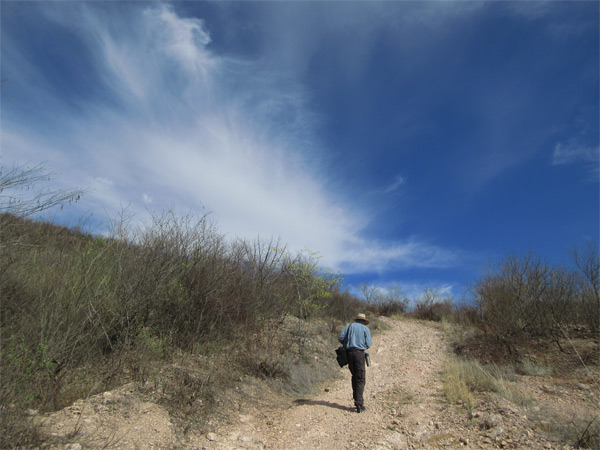 Anders knew this expedition would entail many days of hiking.
What was intended to be a seven day expedition turned into two
weeks. Anders learned that he still had the endurance that he
had twenty years ago. The best purchase he made for the trip
was a pair of Vasquez Talus Pro GTX hiking boots designed
for rock. His feet were always comfortable no matter the conditions.
Happy feet make a happy hiker makes a happy filmmaker. 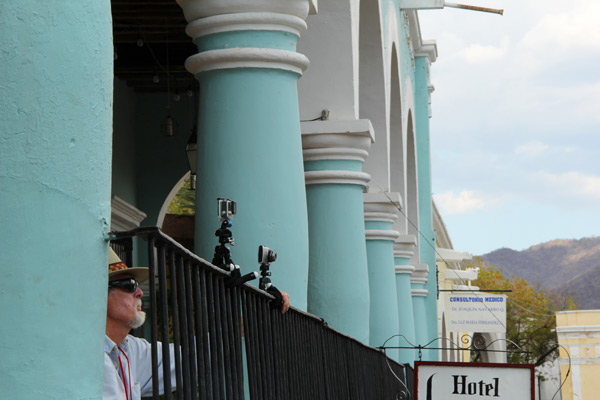 It’s a big world seen through small cameras.
Gopro 4 and Canon Powershot 350 were the smallest cameras that
the 2017 Álamos Sonic Expedition used. Both produce vibrant
and story telling imagery. Except for this image evry photo on
this page was shot with a Canon Powershot 350 – fits in your
pocket and is able to capture photos, videos and audio. The
bendable mini-tripods adapted to a variety of situations. 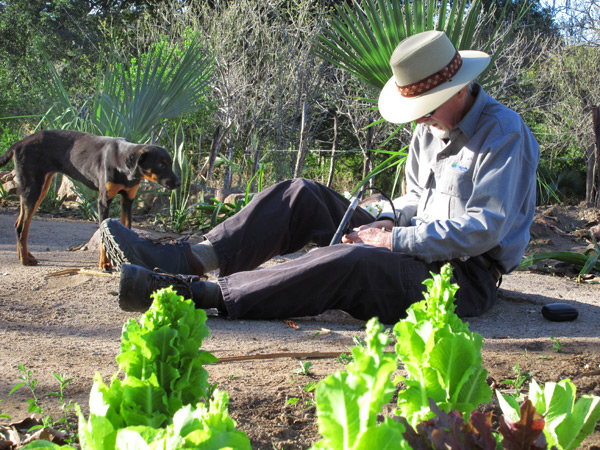 Filmaking attracts interested bystanders.
Anders is checking settings on his Tascam DR60 digital audio recorder.
It is early morning on Antonio Figueroa’s ranch. Parrots are in the
trees, ants are busy and the dog is keen to find out what this stranger
is doing sitting on the ground dog-like. 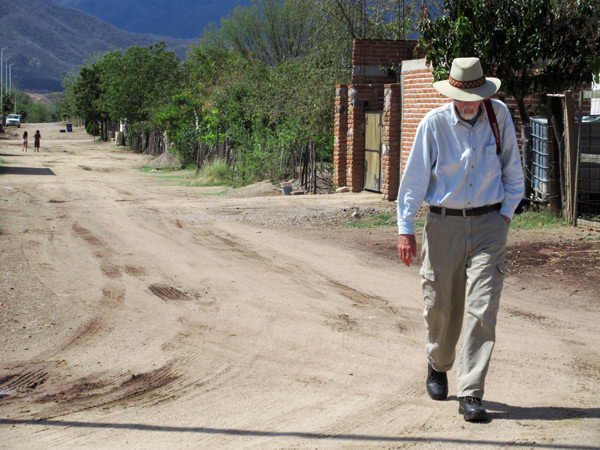 A time to contemplate what has and what will.
One of the biggest changes Anders recorded was the growth of
barrios that run up a gently sloping northern valley floor
and reach the start of the foothills. He is thinking as he walks.
The roads are wide with room for off-street parking. A variety
of homes line the streets: small, plain, colorful, large, ornate.
It will be inetersting to see what these neighborhoods grow into
as the decades flip by like pages on a daily calendar. 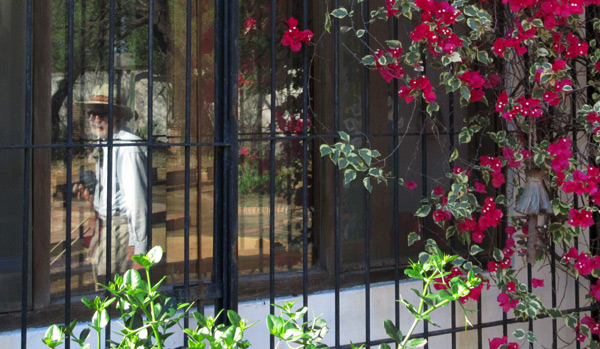 Photography captures what can be seen and at times the surreal.
There Anders is, and then, there he isn’t. All is real: bouganvillea,
security bars, glass, wood window frames. But is that Anders or is
that a reflection of Anders? What is known is this is an Álamos
moment like a sudden passing breeze: here and then gone as reality
and abstraction dance a surreal two-step. 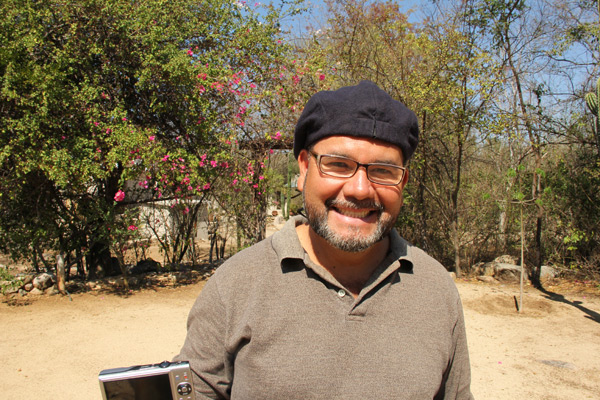 Antonio Figueroa spent three days with working with Anders.
It was a pleasure for Anders to be reunited with Antonio Figueroa
and his family. Antonio took photos, video, recorded audio and
provided a car for many street-road videos. Locations included
his family ranch east of Álamos, the new barrios to the north
and west, Uvalama, La Capilla, La Aurora, Hacienda de los Santos
and the Plaza. As noted, all of the wonderful photos in this article
were taken by Antonio Figueroa except for the above
Anders portrait of Antonio on his ranch.

To see more about Antonio in the Spring and Summer of 1996 visit
Easter Sunday with the Figueroas on their ranch.

Good Morning Álamos, Sonora, Mexico
The 2017 Álamos Sonic Expedition visited Álamos, Sonora,
México between February 23 and March 6, 2017. This scene includes
time-lapse of receding shadows across the Álamos valley as seen
from the Mirador. Video and editing by Anders Tomlinson.
Music by SonicAtomics/Dig Brothers under the direction
of Denver Clay.