The border between where, who, what and why … 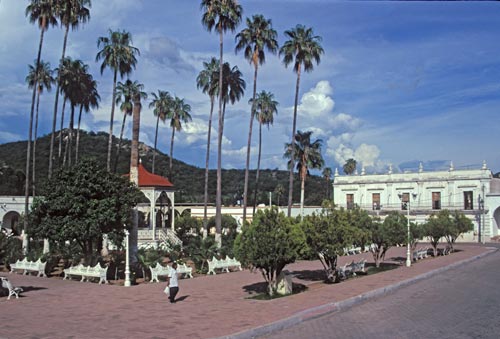 Summer afternoon in the Plaza, two story Hotel Alamos is in the background.

This is a simple moment in a complex world. A woman of Indian blood crosses an empty Plaza as she returns home from her daily shopping trip to the Alameda. The lack of people goes hand in hand with siesta time on a summer afternoon. Stepping back, taking a satellite view, she is surrounded by Sonora, Sinaloa, Chihuahua, Sea of Cortez and not far to the the north, the US – Mexico border. She is in the middle of a violent and costly battle moving drugs across the border to feed growing addictions in the United States: an estimated 660,000 pounds of cocaine, 44,000 pounds of heroin and 220,000 pounds of methamphetamine were sold on America’s streets last year. The first question that comes to my mind is why is there a need by so many addicted people to escape their realities and cross a internal border that has no borders? Why? What would be the Indian woman’s answer to this question?

The Plaza from the Church looking north and beyond to the other side.

The US-Mexico border fortifications have grown over the years: 650 miles of prison grade fencing and sheer concrete walls, 17,600 Border Patrol Agents, 1,200 National Guard soldiers, 165 truck and train x-ray machines, thermal imaging devices that turn night into day, 467 remotely controlled surveillance cameras feeding control bunkers, 4 predator drones overhead – along with helicopters and light aircraft, 10,800 ground sensors and… The border separates families, towns, valleys, histories and futures. Last year 254,000 pounds of cocaine, 3.6 million pounds of marijuana and 4,200 pounds of heroin were captured trying to smuggled across the border. None the less, drug gangs are to have made $25 million dollars last year fulfilling some of America’s many addictions. This is Big Business: an industry of logistics and persuasion serving markets that demands networks and complicated systems to feed its escalating needs. At some level it becomes, “hey, it’s just business – nothing personal.”

There are other costs. On the US side it is estimated that the drug addictions’ health services, interruptions of economic and social progress, crimes and legal systems, jails, court rooms and prisons total $193 billion a year. This is RBB: Really Big Business. Guarding the border over the past decade has cost $90 billion alone, a train x-ray machine costs $1.75 million. Many unsuspecting peace-loving famalies, on both sides of the border, owe their livelihoods, directly or indirectly, to the drug lords, these titans of greed and their investments, corruption and violence. And what is the cost to Mexico? Again the question must be asked, why do so many Americans need drugs to answer their physiological and psychological addictions? Why? 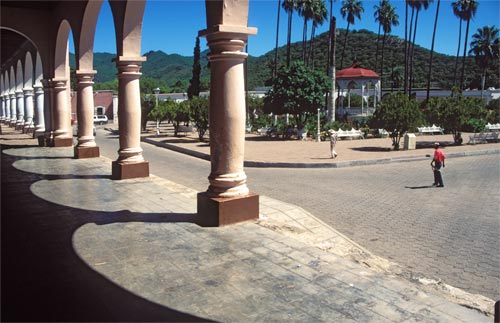 The Plaza framed by a classical world: timeless, enduring, thankful.

The border is many things to many people: It is neighbors, economies, opportunities, sovereignty, entrance, exit, hope, pride, burdens, politics, law enforcement and… Most of the two dozen counties that are on the US side of the border have Hispanic majorities. On one side is San Diego, Yuma, Nogales, El Paso, Del Rio, Laredo… On the other side is Tijuana, Mexicali, Cuidad Juarez, Laredo, Matamoros… On a map it is is hard to tell by place names where the US or Mexico begins. When on the border, the poverty- lack-of-consumerism on the Mexico side is stunning compared to just across the border before, and after, the barriers went up.

Hispanics made up half the USA population growth in the past decade. New York, according to the 2010 census, has 2.3 million Hispanics, Los Angeles – 1.8 million, Houston – 920,000, San Antonio – 840,000, Chicago – 780,000, Phoenix – 590,000, El Paso – 523,000, San Jose – 313,000 and San Diego – 376,000. The USA is turning a little Hispanic. And the southwest, for so long the nation’s frontier and place to go when there was no more room or opportunity back East, was part of New Spain before the United States was the United States. Today, the border region, north to south, from San Francisco to Alamos is its own world, and Hispanic influence is spreading nationwide. Workers, from foreign countries have always made, and make, the USA rich compared to the world. There must be something in the Constitution that supports cheap labor. 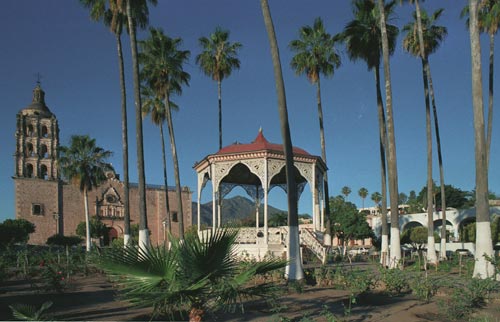 A mountain, cathedral, bandstand, hotel and a heartbeat, priceless.

Ten years ago 1.6 million people, without documents, were caught at the border trying to cross into the United States. After 9-11-2001 the concept of secure borders began a national mandate as border fortifications, protection strategies and assets were developed. In 2010, 463,000 souls were apprehended attempting to cross to the “other side”, in many cases to join relatives. There are several causes for the decrease: controlling, with military precision, populated sectors along the 1960 mile border, growing dangers while passing though Mexico from the south, crime against “crossers” at the border, difficulties of crossing in remote mountains and deserts and… And there was the Great Recession that lingers on, the slow moving elephant blocking the way for paying jobs, especially in the construction industry.

The Great Migration across the US – Mexico border has been going on for decades and the economy took advantage of the resulting population increases: more workers, more consumers, more home owners, more citizens, more tax-payers, more possibilities and…

Migration for many species is the meaning of their lives, they are their migration. The history of the United States is one of migration, we are a nation of migrants: Asia, Europe, Africa, Central and South America, Middle East, East to West, South to North, rural to urban, city to suburb and… Migrations into, out-of, up-down and across will continue in search of water, food, resources, work, comfort, security, education, retirement… Migration is the human way. This is true for Vancouver, Chicago, Shanghai, London, Baghdad, Melbourne and Phoenix as well as Alamos, Sonora, Mexico. 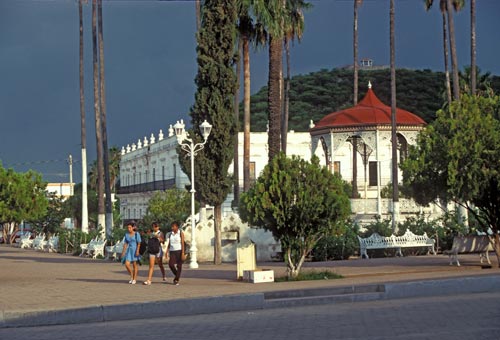 Let us look into the future by understanding today. 45% of children aged 5 to 17 in San Diego County are Hispanic. Baby Boomers, mostly white, in ten to twenty years, will need Hispanics to keep the economy going. And today, the Hispanics kids, who are the majority and in many schools almost all of the student population, need an excellent education to be in the position to function in a productive work force. There will be a huge population, they are already here aging, of Baby Boomers who will need this large trained work force to make their retirements comfortable. The Hispanic school kids need these Baby Boomers to vote, today, for better educational resources. In an era of I, Me and Mine it is nearing a time to consider You, We and Ours. What happens in Los Angeles is important to Alamos, Sonora, Mexico and what happens in Alamos, Sonora, Mexico is important to Los Angeles. It has always been so, and it will always be so, it is the human condition.

Three school girls, good friends – sisters in life, walk across the Plaza and into the future.

From the Alamos Journal.