Klamath River Watershed
It was here, at the Klamath River eight miles south of J.C. Boyles Dam on 9-25-11, that Anders learned Southern California can directly effect Klamath River flow management. He knew that this was a story that needed to be told. To see more visit MovieFeats.com. 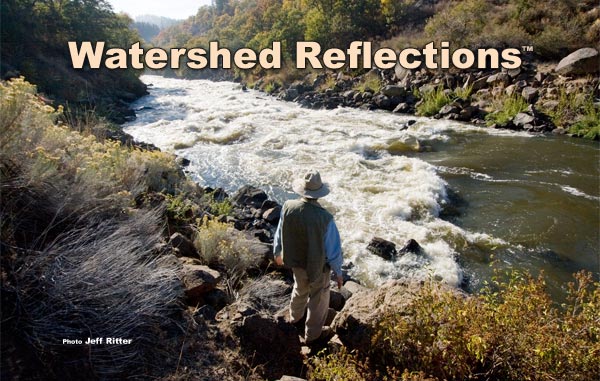 On this day Los Angeles was unusually cool and an net exporter of power. Five rafting companies, with 14 large rafts booked to capacity, were waiting upstream for the power company to release of water from the dam. Since there was no room on the power grid the water was not released and the rafting entrepreneurs now had to deal with well over 100 paying customers and all the expenses to transport them to, rafting and from the river along with lunches.

When we sing of Mother Nature our concerns are for unspoken human nature. 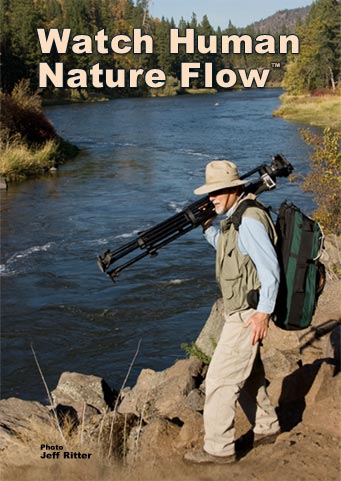 The case may be made that the Klamath River Watershed was the canary in the coal mine in regards to a changing climate and impacts on regional water systems.

These are modern dramas, modern times and modern challenges.

Being there, ready for anticipated events to unfold, is the goal. 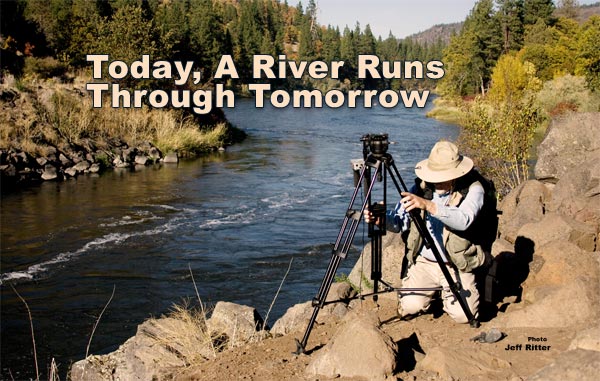 Preproduction and setting-up are important for successful documentary film-making. Being aware of overlapping issues is critical. Time, support, patience, resources and luck are necessary to follow a story wherever, and however it goes. All of the above were involved with this 13 year project documenting water issues in Upper Klamath basin and the Klamath River Watershed. Anders follows the stories, like rivers, wherever they go.

Do we believe everything we read and hear on radio and TV? 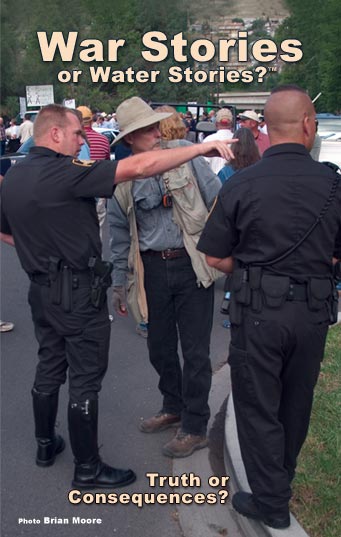 When you first heard 2001 Klamath Basin sound-bites on the nightly news were you told by the media that this was a crisis pitting farmers against Indians, fish versus potatoes and rural America facing off encroaching environmentalism?
President Abraham Lincoln signed the 1862 Homesteading Act to promote western migration. And here we are today.
These are stories about encouraging population growth through redirection of natural resources to stimulate economic growth. These are stories about a lack of clarity in governmental, personal and enterprise risk management. These stories have it all: money, power, land, water, family…

It took a community to help Anders make these films. 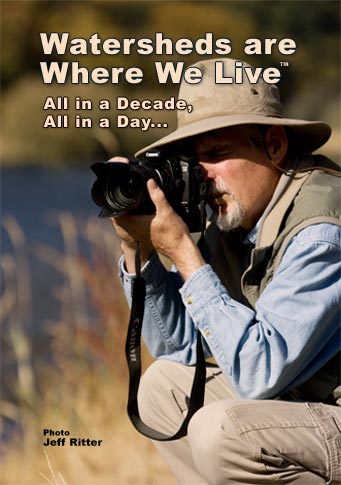 Anders Tomlinson had over 900 shooting days spread across 13 years. 10 drivers, in their own vehicles, assisted on at least 300 days. Project milage on all vehicles exceeded 100,000 miles.

Four pilots and six boat captains helped on the water and in the air.

1,400 hours of videotape were shot: 300 hours of interviews, 350 hours of water issues meetings, 3000 hours of nature studies, 2000 hours of community events and 175 hours of rural American lifestyle. 75 hours of edited projects for public presentations. 175,000 digital images and slides were taken.

We can’t see everything we hear. 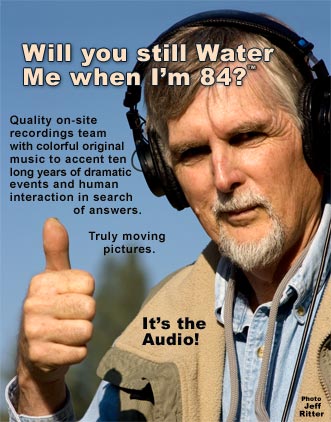 There is drama within the sounds of thousands of cheering people coming together as one. There is power in the sound of thousand of waterfowl rising off the open water to search for food in nearby fields or to continue on with their amazing migrations.
The owl and coyotes at night, blackbirds in mass, irrigation sprinklers, public testimony, protesters at the gates… Music beds by SonicAtomics…

When a film is nearing completion in the post-production editing suites ambient audio becomes important. It is these sounds that bring the scenes into reality focus. Here is where we are. This is what we are doing.

Why do any of us do what we do and support what we support? 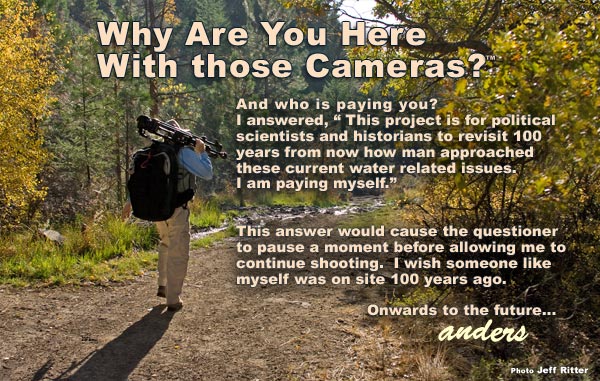 Welcome to Films That Needs to be Seen.
Each of these film projects, on the right represented by categories, are modern American Stories worth telling. Rural life is presented as the daily challenge it is.

If one climbs to the top of the mountain, as I did, and spend years watching these stories unfold, one would be amazed by man’s wide range of sensibilities and behaviors. These are survival stories in rapidly changing times. Up to now they usually are told by agenda-driven-carpet-baggers rushing by in search of a pension. This doesn’t do fish any good, and it doesn’t do people any good. It perpetuates business as usual in a new era where business is failing to manage many present greed driven dangers and complex social challenges including providing pensions.
But bottom line, these are stories of migration and subsistence.

Here history, as passed down by those who were influenced by elders who recall their elder’s words, perpetuates strange bed-fellows and lingering feuds. The drama is driven by those who have nothing to lose, or think they have nothing to lose. This group includes news media, hired scientists, fund-raisers, PR folks, politicians, lawyers, federal agencies and judges. Conflict is fueled by Indian resentment of the White Man for past sins and non-Indians anger at perceived special treatment given to the tribes. There is also bad blood within and amongst the tribes as well as between Anglos, Latinos, Asians, Blacks… On top of all of this Modern Man is trying to maintain wildlife populations at a level where they can be sustain-ably harvested.

And then there is the water resources battle being waged across towns, cities, counties, states and regions of rural and urban America. 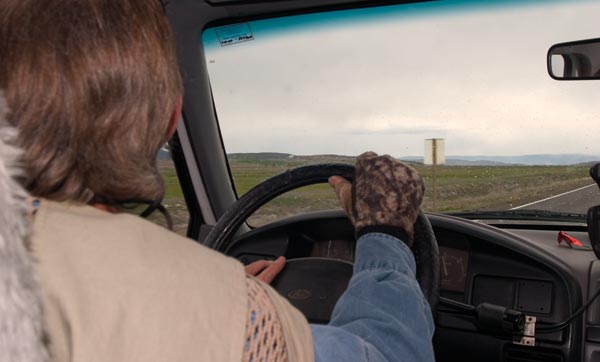 Productive farmland, used for farming, is arguably the most important land we have. And farmland needs water to grow food we eat. Photo- Christian Johannson

What Can We Learn From The Klamath River Watershed?
The human population is growing, and growing and growing. Traditional resources are diminishing as needs increase. Humans need to eat.

Filming the Klamath Basin Watershed took over 100,000 miles of driving and covered maybe 5% of a vast region that has been marginalized by human interest groups. Politics and natural resource management are strange bed fellows. Photo by Christian Johansson

Humans build structure and infrastructures and create products to market. This is what humans do. Building a freeway through a wetland is a natural thing for humans to do. The freeway was made of products man found, transported and configured into materials that became the road. What is unnatural about this? Humans do what humans do. The true question is was it in humans’ best interest to build the freeway in the first place? And the answer is yes, no, maybe and maybe not. The freeway will benefit some humans and it will harm other humans. New freeways rarely make life easier for other species that live there.

What happens if humans’ build a freeway through fertile farmland? The answer is simple, there will be fewer productive acres to grow more food needed by an expanding population. Does this sound like a smart thing to do? Growing populations and changing climates have led to human migrations and wars throughout recorded time. And what happens when humans create farmland out of wetlands? The answer is multiple causations.
Farmland feeds humans. Food does not come from Safeway, it comes from dirt managed by farmers and ranchers. Protect productive soil, it is all we have.