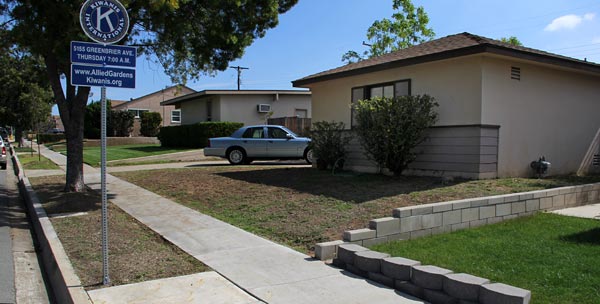 Back When Water, Land and Power Was Abundant –
Adapting can be fun and rewarding! Transform your unwatered lawn into a beautiful water-wise landscape easily. This story begins when Louis L. Kelton and Walter Bollenbacher purchased 1,000 acres from the Waring Estate and their company, Allied Contractors, began developing a residential tract, Allied Gardens in 1955. Each house would have a lawn and a tree in the middle of what would be, across the entire southwest, an unusually wet 100 years.

Front Yard Road Sounds on a Saturday at Noon – 2:13

And What Was Life Like In 1955? –
The first McDonald’s fast food chain restaurant was built, Coca-Cola introduced the can and transistor radios went on the market. “In God We Trust” was added to all paper currency, Disneyland opened, and the USA sent military advisors to Vietnam and troops to Iran, The 64,000 Dollar Question was the most popular TV show, the first nuclear powered submarine became operational and the first USA nuclear power plant went online. Emmett Till, a black fourteen year old teenager, was murdered for not showing respect to a white woman. The first riot at an Elvis Presley concert occurred and actor James Dean was killed in car accident. Rosa Parks was arrested after refusing to give up her bus seat to a white person. Seat belts became mandatory in all new cars. The average wages were $3,851 per year, and the minimum wage was raised to $1.00 per hour. The average cost of a new house was $10,950. A black and white TV averaged $99.95. A gallon of gasoline cost 23 cents. The house seen below was purchased for $13,000. It was one of sixteen available floor plans. Those were the days. 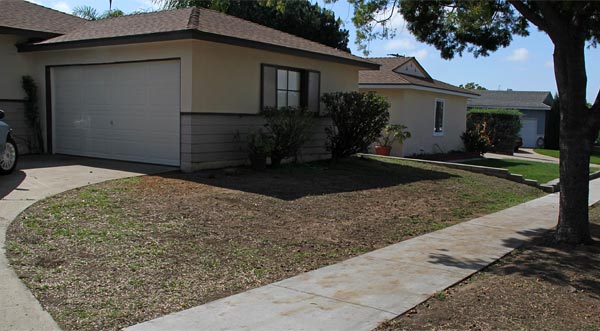 When Allied Gardens was developed few were concerned with where water came from and how much energy was required to move it.  It was as if water grew on trees – not that trees needed water to grow. Those were the days that lights blazed all night and showers could last as long as showers provided comfort and pleasure.
Lawns were the new “new” that everyone was told they must have and keep up. What was the average consumer to do but go with the flow. If one didn’t have a lawn, and maintain it, there was social pressure to change their behavior or they would live with a “deadbeat” reputation. A semi-arid landscape was quickly turning into an urban rain forest.
For an overview of California water systems development from 1950 to 1999.

Under One Groove – track in progress from “Sonic Succulents” – 1:13 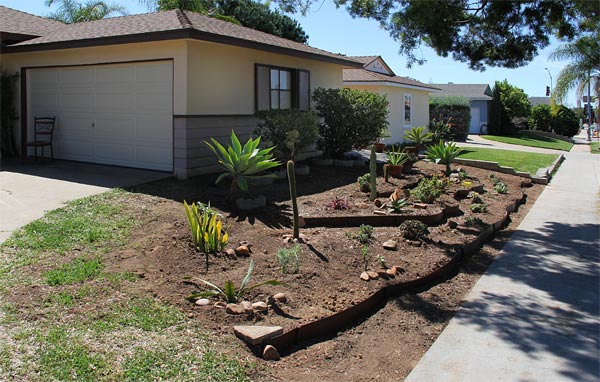 Allied Gardens Has A Double Meaning –
Allied Gardens is the working title for a multi-media project by Anders Tomlinson and Denver Clay. It refers to a film project documenting the development of the smart water garden seen above ( photo was taken on March 14, 2015) and a music project Sonic Succulents by SonicAtomics. In this regards Allied Gardens refers to different gardens sharing experiences and plant cuttings with one another. The film is aware of mounting water and related financial issues. It also spotlights the amazing world of succulent and cactus’ water harvesting techniques and management.

An example of one of the succulent / cactus stories is organ pipe cactus spires that were knocked over by high winds in Anders’ Low Water Usage Urban Garden. They were taken over to SonicAtomics’ music director Denver Clay to be planted in his front yard which is boarded by lawns on both sides. The pipe organ and peruvian apple cactus were 1990 cuttings from Denver’s Garden in Escondido that Anders Tomlinson moved to his San Diego garden in Serra Mesa. Cuttings from that cactus have now moved in 2014 to Denver’s front yard. What goes around, comes around. 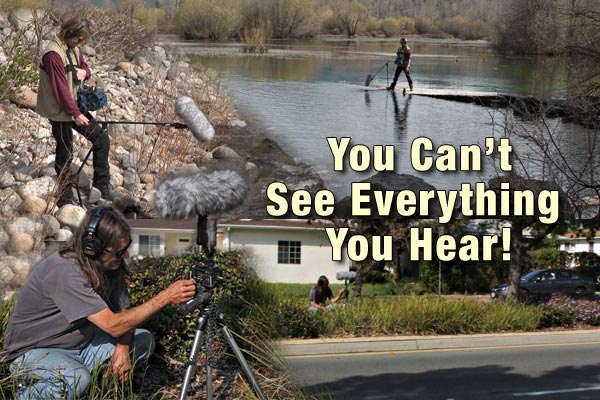 Water Issues Are As Old As Water –
Denver Clay and Anders Tomlinson have been recording ambient audio for incorporation into audioscapes and soundtracks for a long time. Recording water has always been a priority. Denver is seen above capturing Rock Creek and Harriman Springs water in Klamath County, Oregon and Allied Gardens street sounds. Twelve years separate these audio events. Both recordings were driven by documenting man’s water management. Water is the driving issue for Allied Gardens as it is for all life in all habitats. 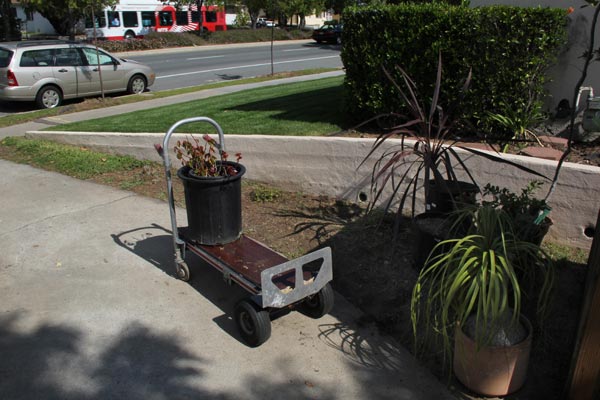 Many Wonderful Journeys Start With Small Steps –
Denver expressed an interest in doing something in his front yard that wouldn’t require much watering. Anders was planting cuttings from his back yard into his front yard and had an abundance of succulent / cactus cuttings because they survive regardless of water conditions; they may wither in dry times but condensation keeps them alive and with rain they always plump up and grow. With the addition of several large mature agave cuttings from Denver’s back yard a garden-for-the-times-and-region was underway. Using what he had at hand, Denver has spent one dollar, as of 10-14-2014, on his landscaping project.
Anders often says “rebuild the future one neighborhood at a time.”
Now, Anders adds, “rebuild neighborhoods one yard at a time.”

Denver had assisted Anders with recording a morning of water related presentations  in January 2014. Denver and Anders were aware of the growing need of human nature – water consumption changes. The fundamental question of how we use water, and, equally important, how we get rid of water, is being seen and heard more frequently across broadcast, print and social media platforms.