It pays to be observant and alert. 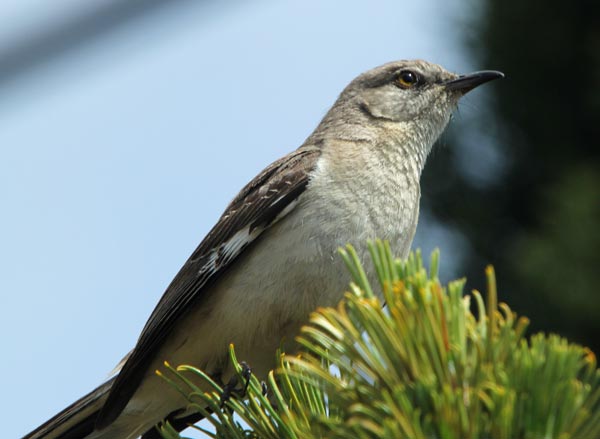 • Mockingbirds, a medium sized songbird, have a way of filling a landscape,
and sky,  with sonic depth that makes this world seems much more
three-dimensional. Mockingbirds measure 8.1″ to 11″ with a wingspan
from 12″ to 15″. They weigh between 1.4 oz and 2 oz. Back in the early 1800’s
many Mockingbirds were captured, placed in bird cages and brought into
the home. In 1828, a talented singer could command as much as $50 on
the Mockingbird market.

Mockingbird song 6:17
Anders recommends viewers, as they take in this page, to listen to this young
male Mockingbird. He sang throughout the day and night, for days, in
search of a mate. This is a section from a 19:19 recording that was
made at 3 A.M.

This Mockingbird has it eye on you and the nest. 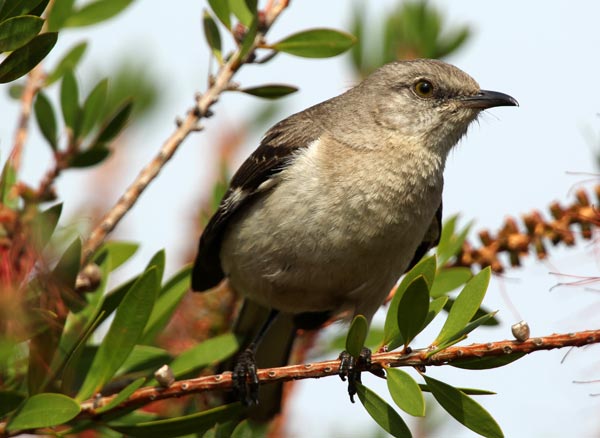 • The Mockingbird population in the United States, 85% of the global
population, is estimated to be 26,560,000 birds. From 1967 to 2014 their
population declined 33%. This story is about an unseen Mockingbird nest
and the protective parents’ behaviors over the course of a month.
It is always a joy to look out the window or sit outside, with camera and
audio recorder, as these Mockingbirds go about their business.

A nice place to raise the kids. 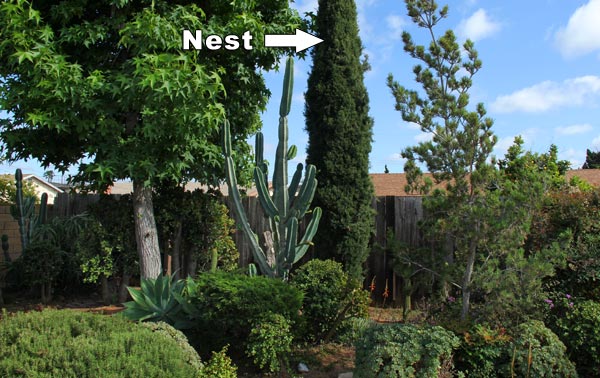 • There is much to do for any fauna amongst all the flora in this water-smart
landscape. Nothing in this yard is watered by man. If the flora can’t survive
on its own it doesn’t survive. If it is a tree that dies selected branches are
left on the trunk as perches for the birds. By leaving the trunk and some
branches in place the carbon load is allowed to stay with the land.
The wood isn’t burned nor is energy, usually carbon driven, used to cut
the tree down. Mockingbirds take full advantage of these “snags.”
The slender Italian Cypress is home to the Mockingbirds’ nest. 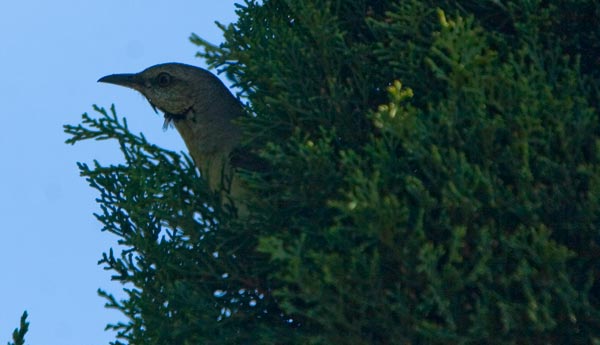 • Watching these Mockingbird events unfolding before my eyes led me to want
to learn more about their nests and breeding habits. The nest itself is
an open cup made out of twigs. This cup is lined with grasses, twigs, trash bits
and rootlets. There are usually three to four eggs with a incubation period of
12 to 13 days. The nests are typically three to ten feet off the ground in dense
shrubs or trees. 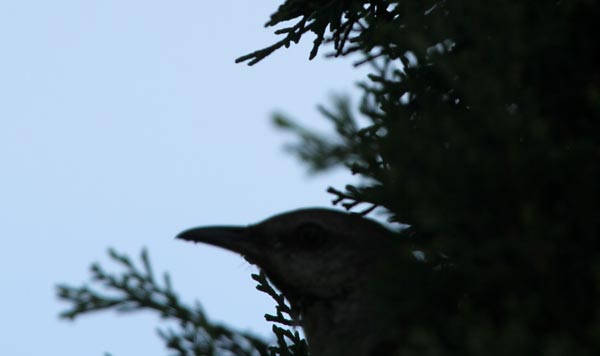 • The nest that this story is about is in an Italian Cypress and in
the same location on the tree where a nest was two years ago.
Mockingbirds have been known to lay alien eggs in another bird’s
nest and leave the feeding and raising to the now foster-parent
birds. I wonder if this Mockingbird nest in the Italian Cypress
will influence Chinese events?

A monumental effort is underway 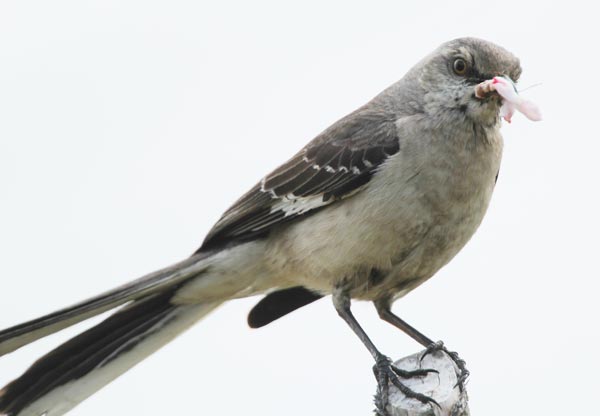 • Mockingbirds eat mostly insects and berries. These parents were observed
delivering insects and flower blossoms. After a brief May shower locally grown
worms were on the menu until there was no more worms. The Feeding frenzy
went on nonstop, in daylight hours, with an unified air lift effort that
supplied the nest with food at least every ten minutes. I do not know what
they did at night. Both parents were involved with feeding and guarding.

“Listen to me, I am trying to make a point” 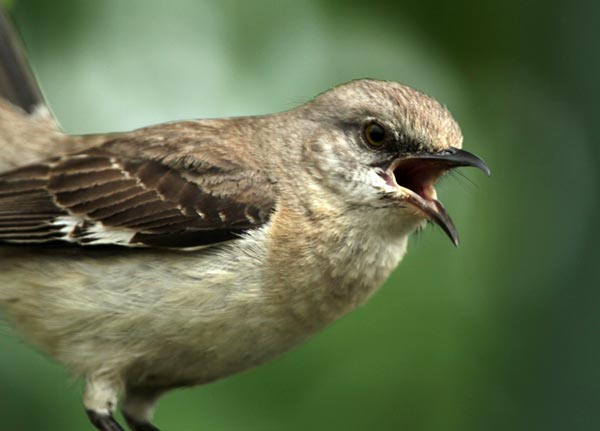 • It has been several weeks since I last heard a Mockingbird’s sing- song
phrases. Once the usually monogamous Mockingbirds had paired up the
vocalizations were shortened, quieter, more like sonar pings. They use a
soft “hew hew” to stay in contact with one another. But then there came
a time that they began to hiss, snarl and protest any and all incursions
into their territory, including their true friend, me.

Audio MP3
Mockingbird Alarm 3:28
This captures a couple of vocalizations from disturbed Mockingbirds.
Clicks from the nest can also be heard.

The security perimeter was in place, no unauthorized fauna allowed. 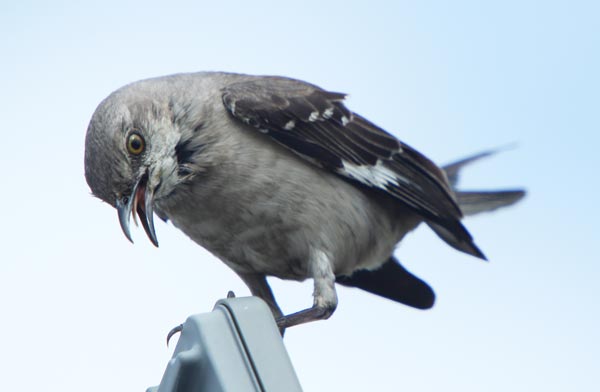 • I read that it takes two to three days to build a nest. I saw Mockingbirds
gathering pine needles off the ground and returning to the nest site.
Males usually build the foundation and females line the nest. At this point
the local cat, Snoopy, was dive-bombed by the Mockingbirds, who would stop
short of the cat and flash their white wing patches. She was chased from
the yard and stayed just outside the fence some 60 feet away. But this was
still too close and a Mockingbird went out to force Snoopy off the property
and down the street. This is nothing new for Snoopy. Protective
Mockingbirds are a rite of Spring throughout the neighborhood
that all living creatures here must deal with. Snoopy got the message.
Meanwhile, the Mockingbirds took advantage of anything they could perch
upon and warned intruders to stay away.

“Why are you still here. Do I look happy to see you?” 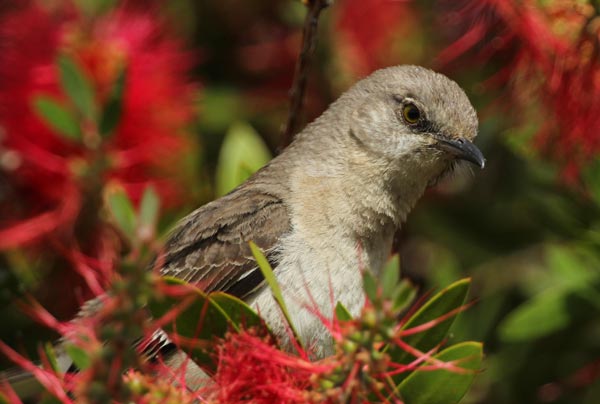 • Mockingbirds can make sounds. They are keen mimics of birds, insects,
amphibians, barking dogs, car alarms, creaky fences and… Mockingbirds are
known to have as many as 250-plus phrases to spin their songs out of.
They can go for ten to twenty minutes without repeating phrases. The males
use their songs to defend their territory and attract mates. The females
are short on song. A note or two is all they need to do what it is they do.
When two males duel with their songs, call and response, somewhere females
are listening and judging. Imagine a world where all territorial disputes,
and mating challenges, were settled with a sing-off, best singer wins.

Standing nearby, be it a fence, line or branch. 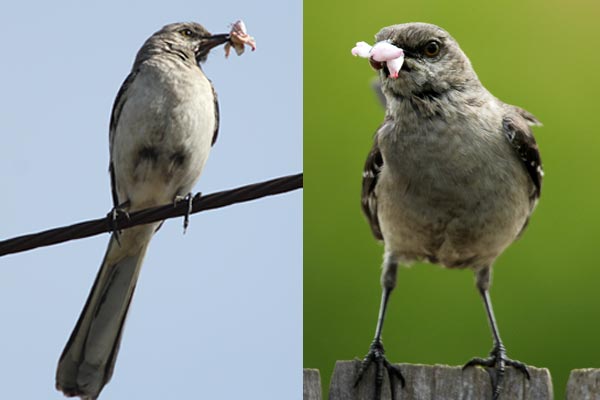 • There always seems to be one Mockingbird positioned near the nest while
another Mockingbird was inside feeding their young. The awaiting bird
would either try to distract me with flying from perch to perch or
use threatening vocalizations. They seem capable of holding food in their
mouth and clack and hiss at interlopers like myself.

Waiting Their turn to bring food to the nest. 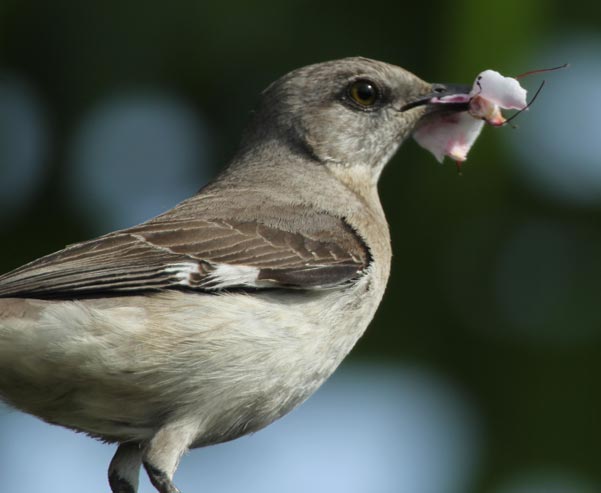 • A male Mockingbird’s territory is one to two acres. Their feeding territory
will be smaller. The young will leave the nest in twelve days or so.
When they emerge from the nest they stay close by and wobble in flight
low to the ground. Certainly this is a time the youngsters are vulnerable
and at risk to predators. They will be able to master flying in another week.
They go from egg to flight in 31 days.

It is easy to gain respect for Mockingbirds. 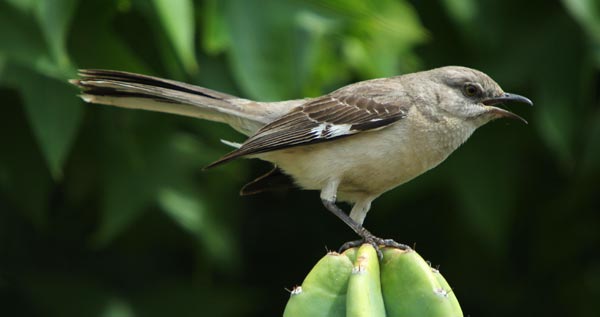 • At times it seems like that there are more than two mockingbirds guarding
the nest. There would be one that is up high on a wire, tree, neighboring roof
or power pole overlooking contiguous yards. This bird would challenge any
crow that came into the Mockingbird’s extensive no-fly zone. Mockingbirds to
not want any crows inside the nest’s extensive security perimeter.
And there would be another Mockingbird on the other side of the house,
or across the street, also ready to respond. As one came closer to
the nest there are one or two Mockingbirds involved with feeding that
would be available to handle a perceived terrorism threat to the nest.
And then the time came where the Mockingbirds go into super-security mode.
Danger! Danger! Danger! It is intense.
No prisoners taken. Stay Away!

On a Strange Day When Things Seemingly Changed 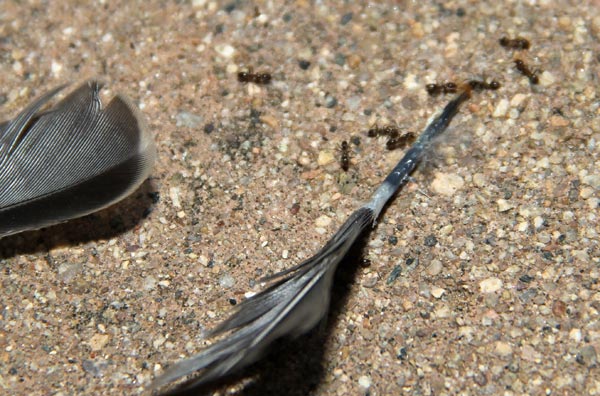 • The manic Mockingbird stage lasted three or four days. The protective
security was starting to ease up. The adult Mockingbirds no longer flew at me.
They still vocalized their displeasure from a distance. They were still
gathering food but deliveries were being made to jade plants, Japanese
Honeysuckle bushes, pine tree and a Bottle Bush. The youngsters
were out of the nest. I noticed birds flying, wobbling, low back and
forth across the yard.

The winds was kicking up when I first heard a young Peregrine Falcon in the
Liquid Amber tree. In the sky two larger birds of prey were raising a
ruckus with crows and doves. Our two Mockingbirds sat high above the yard
on the power-lines. The male was quietly singing, almost whispering,
songs that I hadn’t heard in more than a month. And then I saw little
feathers at the foot of a camera tripod. Ants were on the scene.

This concludes part one of a Mockingbird’s Tale.