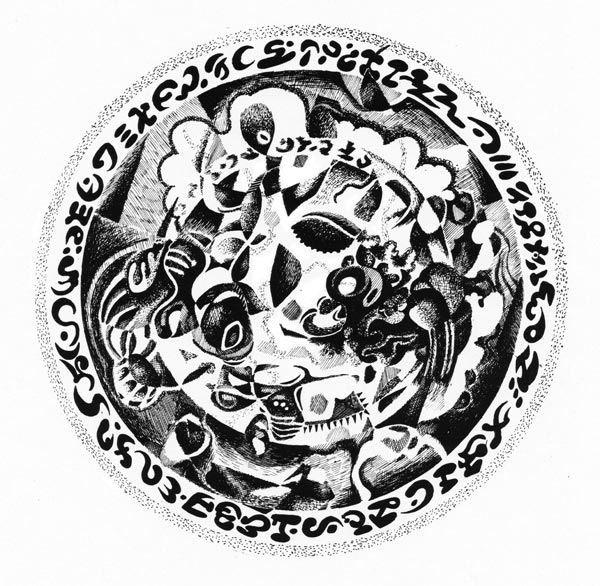 I have always enjoyed looking at, or hearing, languages that I do not understand – they are music for my imagination: logic, discipline, shapes, directions, negative spaces, knowledge, attempts-intent, other ways and places, mystery… Infinite Conversation was a major step towards incorporating unknown languages into my artistic vocabulary/palette/universe. I also enjoyed Infinite Conversation’s movement rising above the representational fray for no creature or landscape exists of and by itself. Soon after I finished Infinite Conversation I received a call from Crow, a prominent Santa Cruz concert promoter and booking agent. He needed a large poster, quick, for a Jerry Garcia Band concert that was going to be at the Del Mar Theater on the downtown Pacific Garden Mall. I decided to use Infinite Conversation as the primary image. The poster was finished the next day. Crow, he was one of many who went by single names back in the post Haight-Ashbury days, came by, loved it and took off to the printer. A week later someone from the band’s management called me and asked if the image could be printed on stage crew t-shirts. I gave my permission. 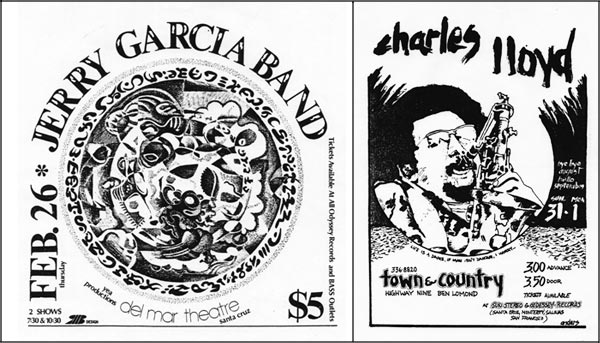 “Infinite Conversation” as a poster and the first poster for Crow – Charles Lloyd.

A couple of years earlier I had wanted to do music posters and asked Crow several times to consider me as a poster artist. Months later Crow called asking if a poster could be made and printed the next day. The end result was the Charles Lloyd poster for Town and Country Lodge in Ben Lomond, Santa Cruz County. This began a productive relationship between Crow, myself and the Rubberbandland collective of artists. This was the first step in the story of Infinite Conversation becoming a poster.

Be asked to pay for something you never asked for.

The Infinite Conversation poster would be distributed and posted across the Monterey Bay region from Santa Cruz to Carmel and over the mountains in San Jose. I thought it would be a good idea to have it framed and I walked down the street to Lenz Arts, who had been supportive of my art efforts, and asked them to frame it. I asked for something simple and inexpensive. I was told by the framer that he had an idea and to return in a week to pick up the framed illustration. Upon my return a very proud framer brought out a massive frame that featured 24 concentric mat rings of different colors. It was an incredible labor-resource intensive one-of-a-kind-over-the-top presentation. I was shocked even before I learned the price. There were several awkward moments before we began to settle the unexpected issue of who was going to pay how much for this custom frame? I am not sure what the final terms were but I know I walked out of the store with a heavy-hard-to-carry frame. I do think I asked what happened to all the cutout circles.

Infinite Conversation was hung above a small landing in the middle of a steep 21 step staircase that led from the Union Street entrance to Rubberbandland on the second floor. It made a powerful statement. 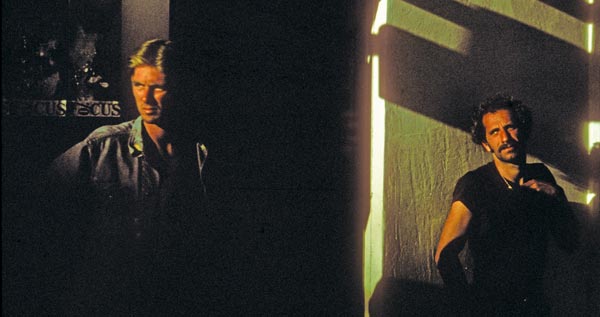 Anders and Jimmy Miklavcic, it had been a long hard five days into nights.

A couple of months later several of us returned, tired, wind and sun burned, from a multi-day Gary Ruble PowerFlick photo shoot in Granite Canyon south of Carmel and north of Big Sur. The front door was unlocked and Infinite Conversation was missing. We soon discovered it was the only thing stolen. 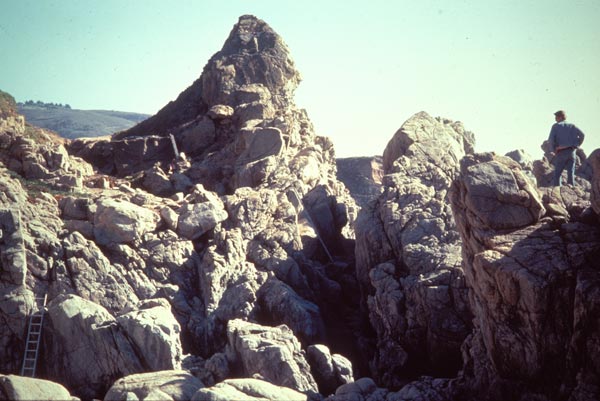 The mid 70’s in Santa Cruz California was a renaissance of sorts. Santa Cruz County was the third poorest county in America. Due to its relative isolation and lack of transportation infrastructure the Federal government invested in the Santa Cruz arts scene. PowerFlicks was one on many on-the-edge art projects underway in the region. 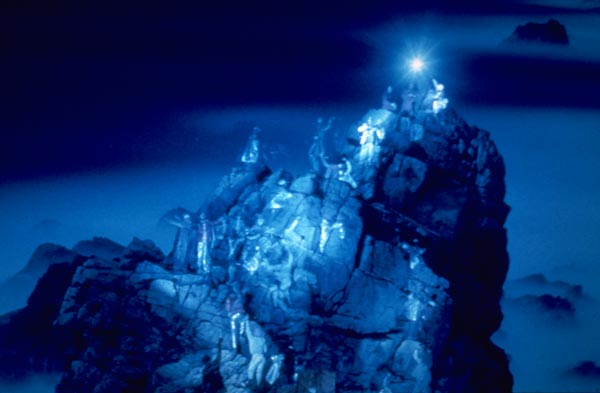 Time and light and night = PowerFlick by Gary Ruble.

Two months later I received a strange phone call saying the “kidnapped” artwork was being held for ransom. Many of the artists that worked in, or visited, Rubberbandland wanted to help recover Infinite Conversation and teach the perpetrator(s) a lesson. Several phone calls followed and a drop off was negotiated, after much hesitation on the kidnapper’s part, to take place on a work day evening in Rubberbandland. Several Rubberband artists hid in different studios prepared to jumped the kidnapper(s) when the artwork was returned. There was only one kidnapper and he was surprised by the show of force and left unharmed and without a ransom payment. Infinite Conversation was returned to its place above
the carpeted stairwell.

For all the world to see but me.

A couple of weeks later someone brought me a page from the New York Times’ entertainment section with a half page add featuring Infinite Conversation. No one had asked my permission, let alone paid me, for the image’s usage. I realized that the artwork for the Santa Cruz’s stage crew’s t-shirts was probably used for this add and possibly many more promoting Jerry Garcia Band concerts in the end of 1976. And like it is sung, “It’s only Rock N’ Roll”…
and what can you do but like it?

Time to say goodbye to something that is long gone.

By 1980 I had moved to San Francisco, without a car, and entrusted Infinite Conversation with Tony who was helping us manage a black – latino – white bass player – funk – soul – rock – disco group Messiah, that had two outlandishly costumed black lead singers. Our main goal was to get them to Japan. Six months later, almost to the targeted goal date, Tony and I watched the band head down an airport tunnel to an awaiting Japan bound jet. Infinite Conversation was too heavy to travel with. Tony, and his mother’s house, was the safest harbor I knew in San Francisco. Tony, married but separated, I was never certain of his true marital status, was somewhat of a rogue. He felt it was his duty, as a “devout” Catholic to spread his seed across the landscape. He at times was employed by Bill Graham’s FM Productions as well as helping several stage crews including the Doobie Brothers and Pablo Cruz. We will get back to Infinite Conversation soon.

Tony had invited me to attend 1980’s Mountain Aire Concert which was an unofficial kickoff concert for the Bay Area music industry at the Calaveras County Fairgrounds as summer tours prepared to go out on the road. Doobie Brothers, Toto, Ambrosia and the much anticipated debut of Huey Lewis and the News headlined this Mountain Aire. To get into the concert Tony told me to tell security at the gate that I was the Doobie Brothers stage crews’ softball manager. I took a bus from Santa Cruz to Stockton and then a stretched cab that stopped at every auto supply store on the way to the fairgrounds. I walked up a hill and found hundreds of slick talking management types, with tour decal covered briefcases and bimbos draped on their arms, trying to talk their way into the show. I waited my turn watching rejection after rejection. When it was my turn I told the young man my story which seemed to confuse him. Another man, probably a supervisor, came up to us and told the younger man that my story is the kind he needs to follow up on. He called Tony and I was let in. It was a wonderful experience to be behind the scenes: having breakfast with the Huey Lewis and the News in the dining hall on the morn of their debut with their soundcheck still in my head, sax solos echoing off the surrounding mountains in pre-dawn darkness. During the three day concert Tony was hitting on both a mother and daughter. His goal was to bang both. When I told Tony a couple of weeks later that I wanted to pick up Infinite Conversation he told me had given it to the daughter as a sign of his true love but she no longer would see or talk with him. Only now have I wondered where the colossal frame and Infinite Conversation ended up.

Disclosure – This Infinite Conversation image was scanned from a xerox copy of a photo copy of the artwork which was started in 1975 and finished in early 1976. The original art, 20” x 20” had a much greater tonal range. But this is what I have to share.