Water Conservation Becomes the Cause of the Day-
Headlines, sewer relining and a rock may seem to be odd storyfellows but here they are. April, 2016: bold water headlines made it, for the first time in years, above the front-page fold of the San Diego UT daily newspaper. The UT’, owned by a large developer, has a masthead that boasts “The World’s Greatest Country and America’s Finest City”. During the past several years water news might make it to the front page below the fold with non-bold headlines. This April, there were at least seven front page bold water headlines.
Governor Brown had caught, or forced, medias’ attention. California water concerns
are now seen and heard everywhere. 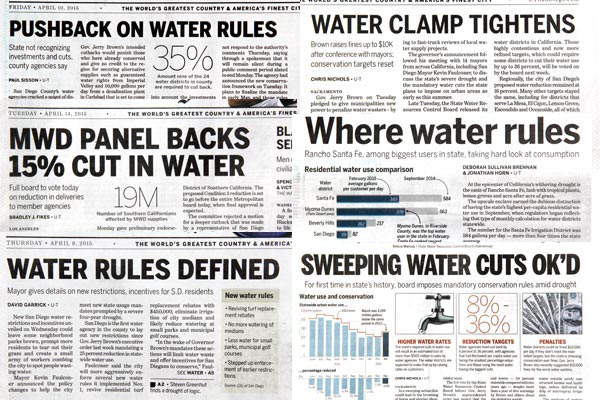 Population, Economics and Technology Equals Us Here Today-
Groups such as the Scripps Institute have been warning us for years of our impacts on climate and that the last hundred years had been unusually wet across the southwest. Newspapers like the San Diego UT were reluctant to give theses voices bold headlines. In fact, it was standard operating procedure to print a second article to rebut voices like Scripps Institute. The “status quo” was being challenged and the “status quo” resists change. Now, we rarely hear voices that say climate change is unfounded. Many politicians still talk about the adverse impacts of attempting to deal with climate change would have on our consumer based economy. And they are right, but they don’t acknowledge that this economy model is what created anthropocene and our related “climate change”. Anthropocene proposes human global impact is equal to the population times affluence times technology. But this isn’t about who said what, who blamed whom, who is right and who is wrong be it Parents, Children, Wealthy, Poor, Leaders, Followers, Healthy, Sick, Believers, Non-Believers, Warriors, Pacifists, Political, Apolitical, Criminal, Law Abiding, Strong, Weak, Educated, Uneducated, Natural Selection or H: all of the above – Human Nature. This is about an affordable water smart garden being developed by using what is available. 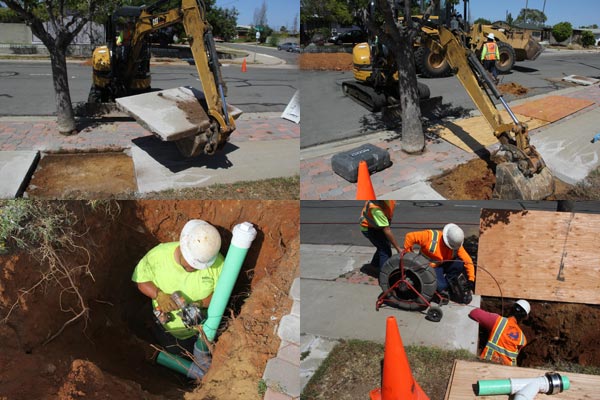 Forty A Day With 1,6000 To Go-
First, “no street parking” signs were posted on the sidewalk. A couple of days later the first of several crews arrived to start the sewer re-lining project. The concrete sidewalk was cut and the slab lifted up and then serious digging began. A new connection was hooked up to the residence’s lateral and a camera investigated the line to the main sewer. This crew averages 40 re-linings a day with 1,600 throughout San Diego remaining on their contract. 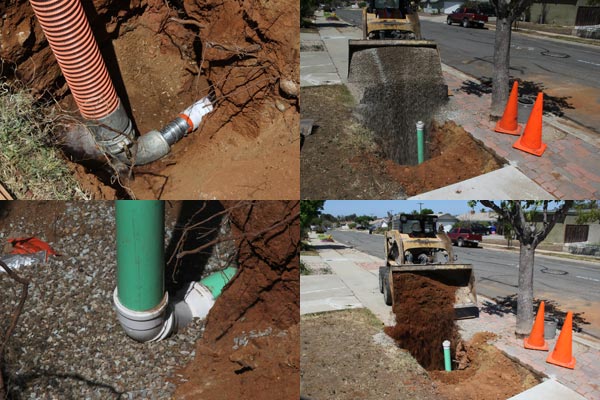 Re-lining is All about A Sleeve and Pressure-
A sleeve was insert into the lateral and pushed against the old pipe’s lining using air pressure. With the re-lining complete, trucked in gravel was dumped in the hole followed by the original dirt. Much of San Diego is red clay as seen here and looking into the hole was like looking back in time if one knew what they were looking at in geologic time. 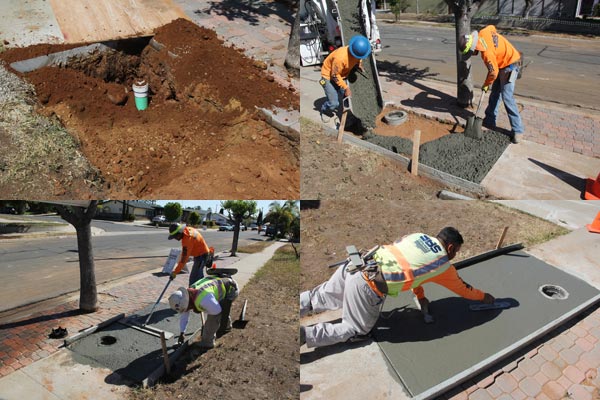 Concrete and Finishing-
The fifth crew on site was the concrete team. They were followed by one man who did the finishing work. A couple of days later the “no street parking” signs were removed. The next time a crew comes through they may do more than simply re-lining.
Who knows what new technologies and infrastructure design may be applied to these residential neighborhoods in the future? (Anders is currently working on a video documenting the entire re-lining process – “you were there.”) 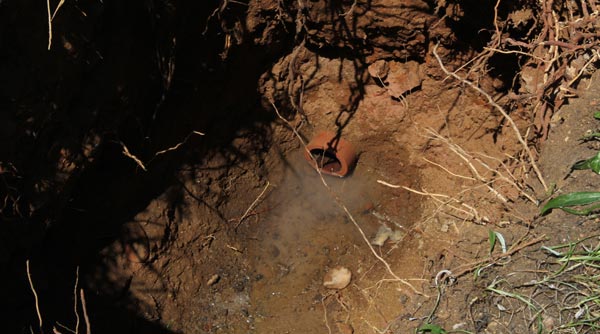 A Water Source For the Future-
One reason the sewer re-lining project is part of the water story is that sewers moves water and waste. Sewers are part of the water distribution system. Currently this water goes through an expensive treatment plant and is then piped out into the ocean. The Federal Government has found that San Diego is not treating the waste water satisfactorily and is threatening huge fines. Meanwhile, 200 miles above us astronauts recycle their urine into drinking water and less than 100 miles up the freeway Orange County is recycling sewer water into drinking water. Water is water and need is need. Speaking of astronauts, when they look out their windows at earth they see a very thin band, 62 miles, of blue above the ground. This is our fragile atmosphere and it is not endless or even large, it is merely 62 miles deep and the biosphere, living zone, is around 12 miles including ocean and atmosphere. This is a small, delicately balanced world. Speaking of geologic time, March, 2015 was the first month that the entire world broke the 400 parts-per-million (ppm) for carbon dioxide, the highest levels in two million years. Under this sun we know the clock is always ticking.

The tiny headline and three sentences devoted to rising CO2 levels were at the bottom of page 3 in the UT’s first section. In geologic-time-logic it would have been the big front-page headline printed in bold war-font-size. The reason it didn’t make the front page is it challenges the basic driver of our beings: the burning of fossil fuels and without fossil fuels how would we be who we are today? Is there an economic system that is not directly dependent on fossil fuels and requires an ever increasing population – consumer base which has an ability to buy now and pay later? One may ask what does this have to do with our village of young cactus/succulents village, old rock and bare earth that comprise Allied Gardens? Everything. 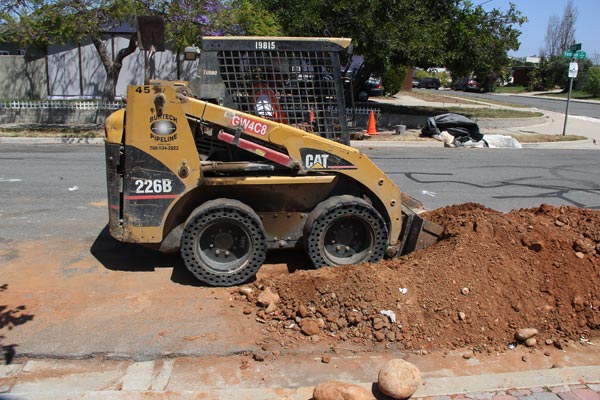 Sitting In Piles Along The Length of the Street-
Now we finally get to what sewer re-lining has to do with the Allied Gardens project. Anders noticed rocks that were sitting in the dirt piles on the street. The workers looked at Anders with surprise when he asked if he could take some of the rocks. “Of course you can” they answered. 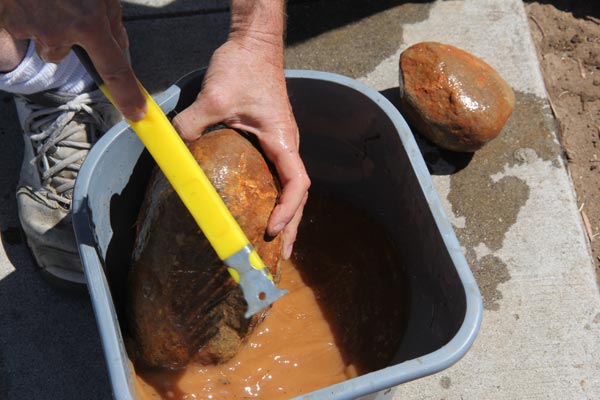 Wire Brushing With Water Works Wonders-
The reclaimed sewer project rocks arrived at Allied Gardens where Denver and Anders removed the dirt from the rocks and then placed them along the lower terrace.
They had an immediate visual impact. 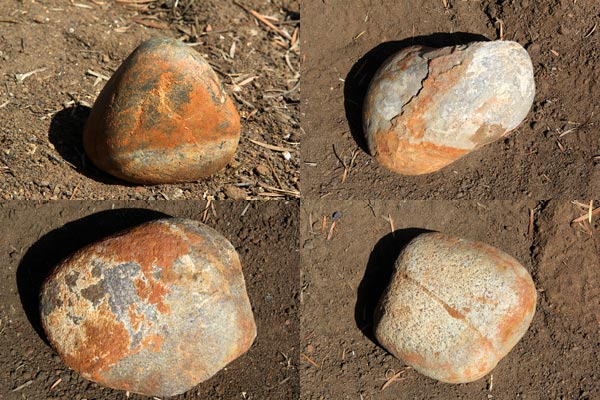 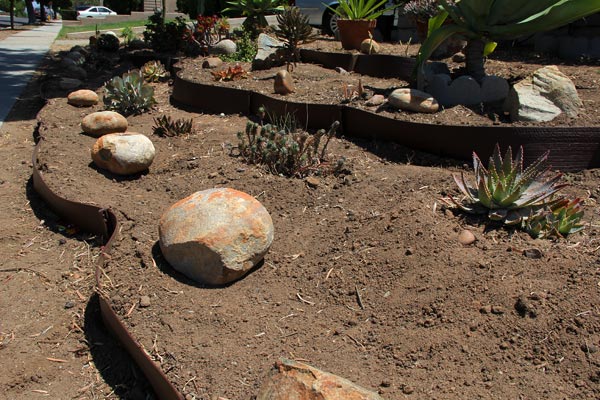 Discarded Rocks Stand Out on The Lower Level-
The recycled rocks do what they do in the daytime and at night reflect neighborhood ambient light and passing car headlights. They attract passing eyes to this peaceful village of cactus/succulents. The additions of these rocks had no impact on Allied Gardens’ bottomline which remains at $80. Neighbors and friends have donated several new succulents to the project. At this point, May 7, 2015, there are 39 different cactus/succulents on the three terraces. If there is a need for more space rocks can be rearranged to make room for new plants. One of the project’s primary goals is cuttings from Allied Gardens are planted in other gardens. 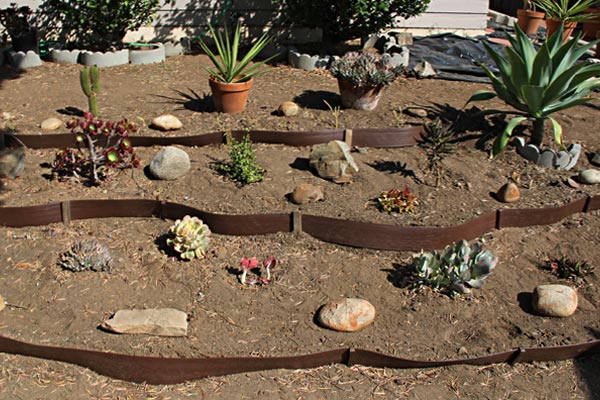 Spread Out Like Notes On A Music Staff-
May 7, 2015 – there is the possibility of rain with low, fast-moving dark grey clouds overhead. Winds gusts are moving tree branches. One can only hope. And if it does rain, it would be to everyone’s benefit that as much as possible is captured before it runs off into streets. Not long ago most homes in San Diego had cisterns. Today, every new residence, be it single family or a residential tower, should have rain water capture infrastructure. One can only hope. At 3:15 PM, it began to drizzle in Anders’ yard for 15 minutes. Five miles away Allied Gardens, spread out like notes on a music staff, is open and receptive to the elements. Hope springs eternal.

2001: A Year In The Life of The Klamath Reclamation Project
2001 was a difficult year for the large farming community working lands, and supporting agriculture, on the Klamath Reclamation Project’s Oregon and California fields. National, international and regional media came to cover the story of fish versus potatoes, farmers against Indians, rural America standing up to the Federal Government. Few words were spoken, or written about a much larger directly-related picture: there was less snowpack, the nights were getting warmer, flora and fauna were migrating away from the equator, water temperatures had become lethal for fish throughout the Klamath River Watershed, carbon dioxide levels were rising et. al. A Los Angeles Times reporter told farmers, concerned with media’s narrow focus, that news was entertainment and there was no need to let facts and background get in the way of a good story. The following is from this website’s section on the infamous 2001 water shutoff…

NBC Evening News sent west coast correspondent George Lewis to report the story and I attended three interviews with them. George was joined by his ace crew of cameraman, soundman and producer. They flew in, rented a car and went to work. 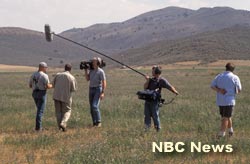 The first interview was with Ty Kliewer, a young Klamath Falls college student – farmer. Ty tried repeatedly to engage NBC with the concept that the problem concerned the overall Klamath River Watershed and not the Klamath Reclamation Project. He was ignored. Interviews about something as large and complex as the 12,000,000 acre watershed across two states, seven large counties with eight rivers and 7,454 waterway miles do not translate neatly into sound-bites peppering a three minute news report. Years later, after an exhaustive study, the National Academy of Science agreed with the Ty, the problem was not about the localized Klamath Reclamation Project it was about the overall Klamath River Watershed. In the bigger picture, like a canary in a coal mine, the Klamath River Watershed was just another wake-up call for billions of humans trying to survive on little planet Earth.”
More Klamath Shutoff Media

The First Year From Ground Zero to Substance and Shape –
It all started on March 13, 2014 when Denver Clay, SonicAtomics’ music director, asked Anders Tomlinson, SonicAtomics’ creative director, if Denver’s yard could become water smart. Anders brought over cuttings from his urban “drought” tolerant garden. A year later, after 36 hours of labor between the two and $75 in materials, Allied Gardens posed for a formal portrait. This is more than a story about the creation of a Southern California compatible garden starting with a lawn that was no longer watered: this is also a film and soundtrack project. Welcome to Allied Gardens.

May 8, 2015, 3:45 AM – Anders was woken up by the sounds of rain outside. At 5:30 there was a downpour’s sweet roar that lasted for several minutes. Resourceful cactus and succulents will brighten and plump-up with this watering and thrive well into summer. Off and on showers with occasional brief downpours continued through mid-morning. Mockingbirds were singing again by 10AM. San Diego UT’s headline for the day was “$85M DEAL COMBINES U-T AND L.A. TIMES”. On May 22, 2015 the UT became the San Diego Union – Tribune and UT’s “The World’s Greatest Country and America’s Finest City” was dropped from the masthead. One small change for San Diego, one triumph for objectivity.