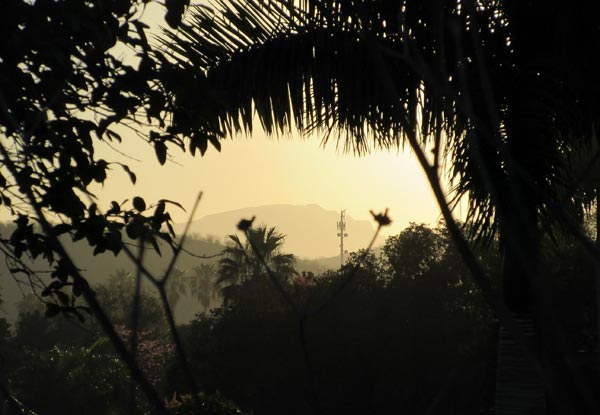 Another sunrise on Calle Toluca in Álamos, Sonora, México
Calle Toluca is a short narrow little-used cobblestone street with
six casas and an old folks home, Casa Hogar Inmaculada, run
by Catholic nuns and owned by the Bours family before they donated
it to the city. Calle Toluca connects Calle Galena and Calle Sonora.
Guadalupe Hill stands between it and the Plaza to the east which
is a ten minute walk by way of the two shortest approaches, up and
over the hill or around its northern face. It is the start of a new
day on Calle Toluca in Álamos, Sonora, México. Estamos aquí.
As the song is sung, “here comes the sun.” 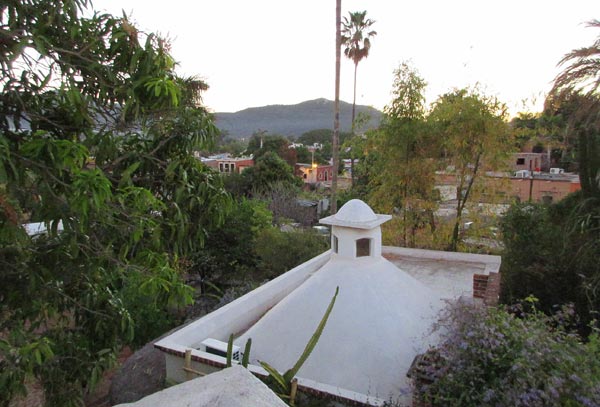 Birds, barking dogs, autos, trucks, radios combine voices.
Álamos, Sonora, México is waking up. The morning chill will be
chased away by a brillant rising sun. Traffic on Calle Galeana,
Calle Sonora and the busier streets that lead to the Alameda and
Plaza can be heard in spirited surround-sound. Barking dogs,
motorcycles, bicycles and an auto suite of honking, braking,
accelerating, alarms sounding and car radio music compose the
hustle and bustle of a proud rural Mexican town going to work,
school, shopping or visiting. It is all about tempos, timbres,
frequencies, transients, crescendos, contrary motions,
counterpoints and call and responses. 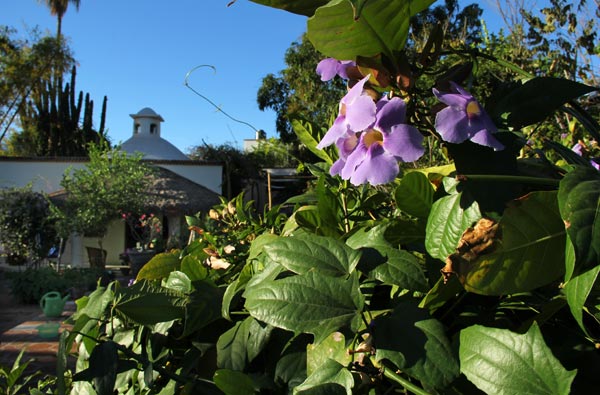 It is warm in the sun. Imagine the surrounding sounds.
Roosters crow and pedestrians talk and whistle amongst
themselves. Chirping/hissing/clicking insects, percussive
parrots, sonorous doves and a multitude of other bird species,
either flying or roosting, embellish a 3D soundscape which
includes near, distant, left to right, front to rear
and ground level to treetop, or above, polytonal and
polyrhythmic notes, tones and phrases. All of this, and
an unending parade of accidental incidentals like horse
hoofs on stone, contribute to a sunrise symphony known as
Álamos, Sonora, Mexico. Calle Toluca has a front row seat. 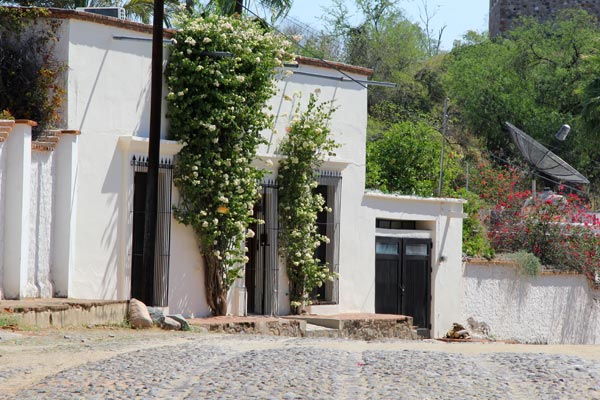 This is 6 Toluca across the street from the old folks home.
Casa 6 Toluca welcomed the 2017 Álamos Sonic Expedition’s
base camp from February 25 to March 6. Anders and his
equipment stayed in the room to the left of the flowering
vine-framed front door. It had a bathroom and shower with
the best water pressure Anders experienced during his Álamos
stay. Directly across the street from Casa 6 Toluca is the old
folks home which had been unoccupied for 20-25 years before
the Bours donated it. The Bours also own the house to the
west of Toluca 6 and a large field that borders the northern
walls of all the homes on the north side of Toluca. Earle passed
away in 2016 and his ashes are in a bench in the new section of
the cemetery. Earle and Álamos are one for eternity. 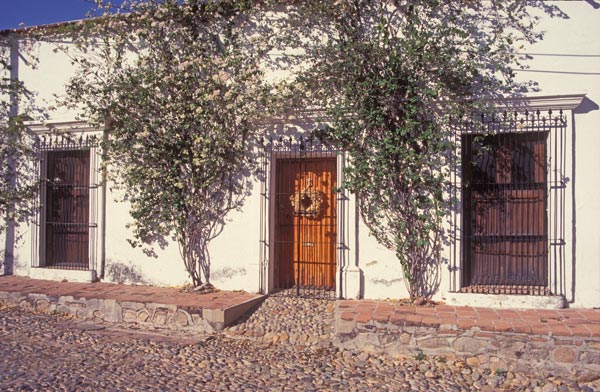 Anders wore a front door key on a red string around his neck.
Anders met Joan in 1992 when she was a regular visitor at
the Nuzums on Calle Commercio. Elizabeth Nuzum and
Joan were good friends who shared many interests including art and
design. Joan Gould Winderman is a free-spirited modern woman with
an athletic vocabulary, animated conversations and no shortage of
percolating opinions. An upcoming essay will document a couple of
Joan’s handmade paper and photo art projects. 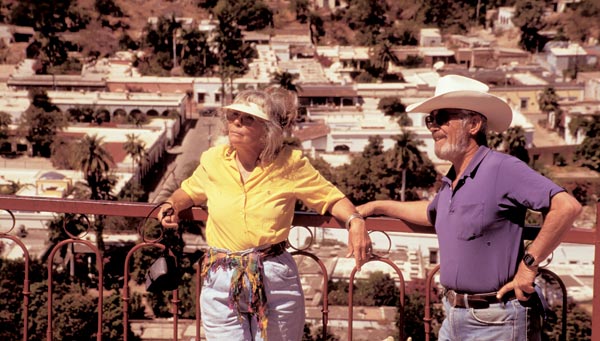 Earle and Joan, 1996, at the spring kite festival atop Mirador.
Anders first met Earle in 1996 when he visited the Winderman’s
house for coffee one spring afternoon. As Anders was leaving
Casa Toluca, Earl pulled him aside and said, ” I want you to
know, and I mean this as a compliment, I can’t tell if you are
a rich man or a poor man.” If Anders had met Earle for the first
time on a street Anders could have said the same of Earle. 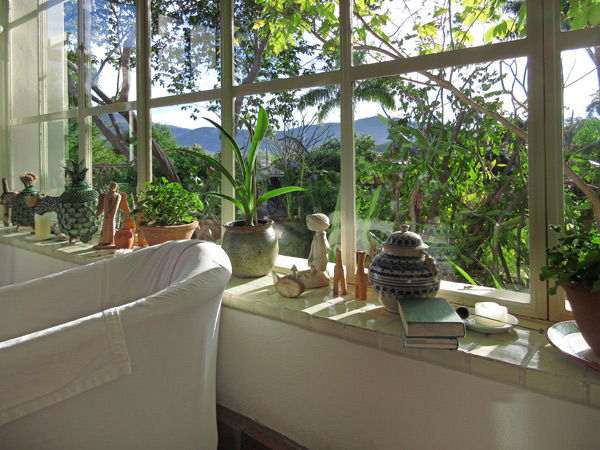 As morning light streams in brightly, outside Álamos is alive.
The open floor plan kitchen, dining table and sitting areas
have a wall of windows that bring the immediate garden and
surrounding mountains into full view. Art, books, knickknacks
and plants are placed with purpose and design on shelfs, tables
and walls. This month’s New Yorker magazine brings
bundled reflections from north of the border. It should be
noted that Álamos does not look at folks like Joan as being
Norte Americanos because México is part of North America.
People from Canada, United States and around the world
who have taken up residences are members of the “foreign
community” in the best sense of the word.Each individual
brings with them their culture and set of beliefs.
New Yorker serves an important purpose on Joan’s table. 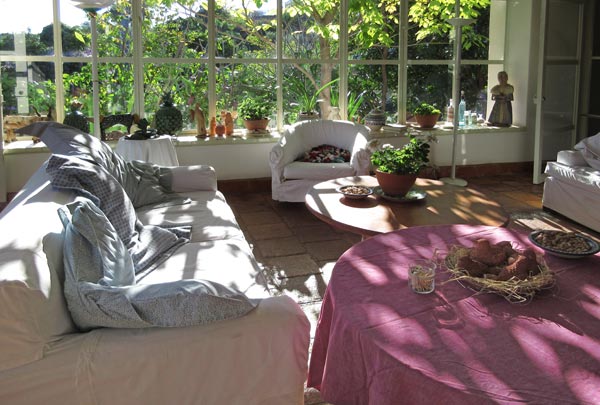 Imagine the countless tales that have been spun in this room.
On a bedstand in the bedroom Anders stayed in was a new
book, published in late 2016, of Earle Winderman’s letters
complied by Joan Gould Winderman. Joan was using this copy
to make revisions for the next print run. A window into the
world of Joan and Earle can be discovered by reading her
introduction to Trauma and Drama: A Spanish-Style Home
Restoration, Alamos, Sonora, Mexico 1987 to 1989. Anders
enjoyed reading of Earle Winderman’s interactions with people
Anders had met in the early 1980’s. 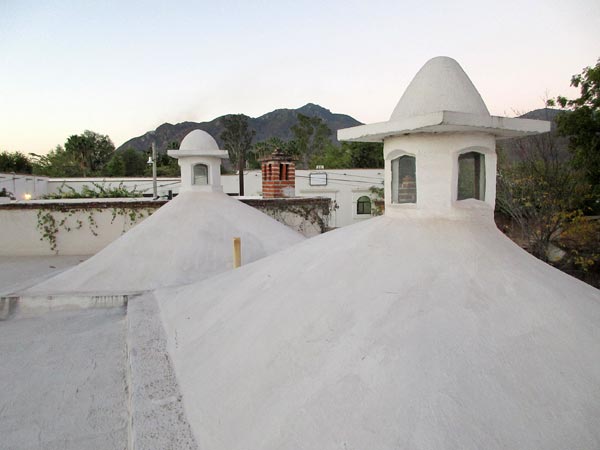 Two of the famous domes from Earle’s Álamos adventure.
Earle chose Álamos, or Álamos chose Earle, to reinvent himself
in México. In 1987 he rented a house, went to Spanish school,
bought a house from Mrs. Smallens that had been vacant for eight
years and began the renovation. The search for “dome” men runs
throughout the book. The long sought “dome” men arrived
November 28, 1988 and were finished in December. The house
was functionally completed in 1989 with Joan’s arrival. 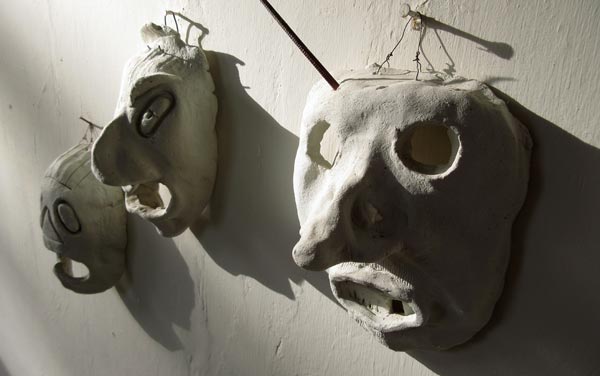 Earle tried his creative hand by making these masks.
Anders thought “a love story” could be added to the
book’s cover – Trauma and Drama: A Spanish-Style Home
Restoration, Alamos, Sonora, Mexico 1987 to 1989 – a love story.
Earle clearly expressed his love for reinvention, new friends,
language, life in México, the ying/yang of renovating a ruin
and partner Joan. Beloved Runner, a hybrid wolf, was by Earle’s
side as he wrote these “wishing you were here” letters to Joan. 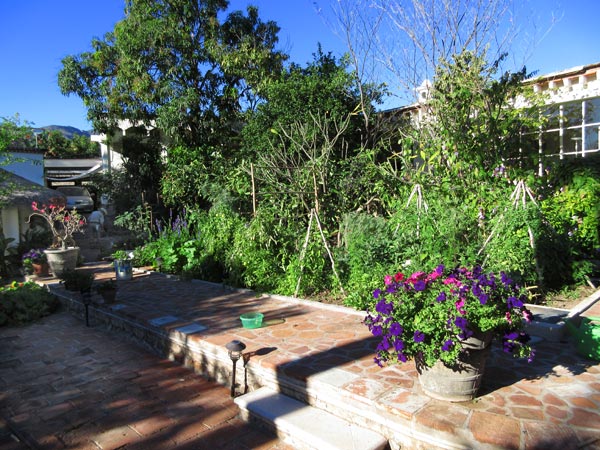 Elements and guiding hands work for flora and fauna.
Water is on the tip, or unfortunately not on the tip, of
most tongues these days worldwide. A major change from when
Anders last visited Casa Toluca is the swimming pool is now
a garden with roof rainwater being piped underground into
the old pool. Water delivery was an issue when Anders first
visited Álamos in 1983. Municipal water in Centro Álamos
was being delivered for a hour or two. The reality is Álamos
may have had centuries of water management experience with
limited water resources. Casa Toluca well has has never failed
in 30 years but has been deepened. Casa Toluca 6 ownership
wants no water that cometh to goeth unused. It is a sign of
the times: store water for when there is no water. 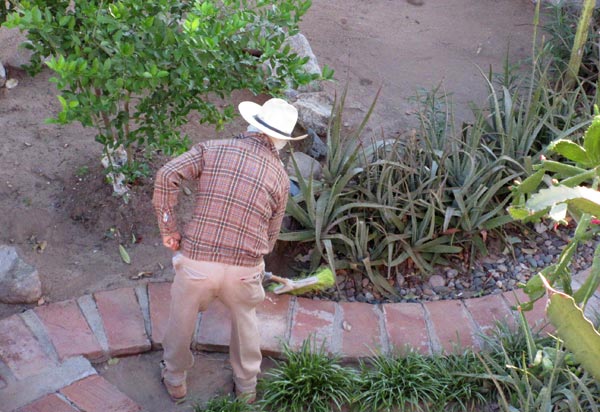 Manual, retired, still comes to work in the yard he knows so well.
Manual came with the house when Earle purchased it. He is a
major character in Earle’s letters. The relationship between
property owners and those who work for them is complex. It can
be seen as a game with all players playing against, and with,
each other while always aware that they need one another
on many levels. It is a dance that can last decades.

Manual retired a long time ago and received a stipulated
payment for his years of service. He still comes to take
care of the grounds he knows so well. He has been here
longer than anyone else that is still living. 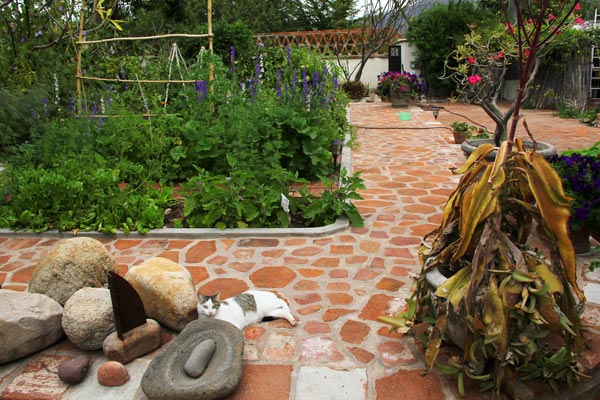 Welcome to a place of bounty and a cat with no name.
Anders spent time in 2017 outside a building supply store
across the street from the hospital. Several men from the
“foreign’ colony were making purchases. Everyone knew what
the other was working on. They knew the joy of success and
the agony of failure. These stewards were a community within
a colony within a town. Earle was once one of these men.
Today in 2017 his home, in his absence, seems to be in good
working order. Much of what Earle built as a gringo building
contractor still stands. He left a strong foundation
for the future. He left Casa Toluca in a better place. 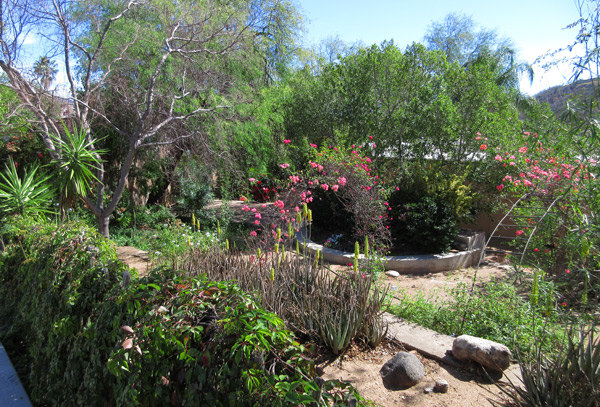 Color and coordination, subsistence and sanctuary, resources and respite.
The garden is a vital place with tomatoes, herbs, lettuce,
flowers, squash, chilis, eggplant, parsley, 10 flowering
vines and 2 rose bushes. There are 2 orange trees, 1 Meyer
lemon, 3 lime, and 1 wonderfully sweet grapefruit, lots of
apple banana, several guava, 2 large mango and 1 pomegranite.
Joan told Anders she would head north later in the year
when there was no longer food in the garden ready
for the dining table. 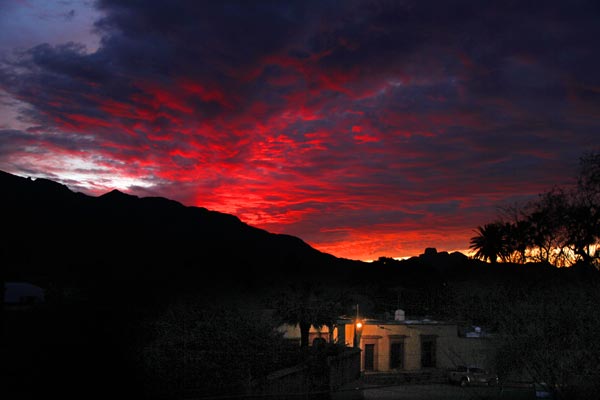 In the wee hours of the next morning it began to rain.
This was the view from atop Casa Toluca’s roof looking west
into a dramatic sunset. This day was coming to a close.
Sometime after 1 a.m. it began to rain and thunder. It was
as if the rainy season of August and September had arrived
in late February/early March.  Within a couple of days, as
Anders prepared to head north, otra lado, everyone was
talking about the unseasonably hot weather.

Special thanks to Joan Gould Winderman
and Denver Clay for their assistance.