There have been changes in Álamos since Anders last visited. Influences and multiple 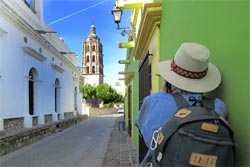 causations included a copper mine to
the northwest and a silver mine to the southeast opening up, 2008’s Hurricane Norbert, La Fuerza del Destino Mexican
telenova-soap opera filmed in Álamos and airing in 2011 and being designated a Pueblo Magico by the Mexican Government and tourism industry in 2005. Over the centuries Bishop Reyes Cathedral, the subject of the above Anders’ photo, has stood tall. Álamos, Sonora, México, like the world, has grown in population and cars. It should be noted that there are no stop lights in all of Álamos and surroundings. To see more of Anders in Álamos 2017.

Anders Tomlinson, as a boy in Southern California during the 1950’s, would step 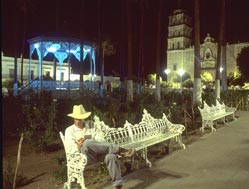 out of his
family’s drive way and stand on El Camino Real, the King’s Highway, and look both north and south. His imagination took over, where would this road, in either direction, take him? He would eventually travel El Camino Real up California from San Diego its northern end in Petaluma.
In 1983 a friend, who had family in Álamos, Sonora, México, invited Anders to come along for a spring time visit. The journey was magical, traveling across the Sonoran Desert under a warm star filled sky while listening to an all-night radio broadcast of Jethro Tull. Arriving in Alamos during predawn hours was arriving in another land… another era… another spirit. Here civilization straddles wilderness.

Several trips to Álamos over the years followed. In the summer of 1997 Anders arrived from an ongoing film shoot in Klamath Falls, Oregon.

A couple of weeks later, he was invited to a former Alamos government official’s home and his personal history library. Anders came across a 1890 mining journal describing Álamos as the southeast corner of the Great Basin and Range and Klamath Falls as the northwest corner. Eureka! Anders knew he had meandered into a project chronicling the multiple connections between these two regions. The nature of Anders’ film projects is to return to specific locations throughout the years to document passing time. More can be seen at tule-lake.com and moviefeats.com.

2009 thru 2012 have been important years for this project. From the end of 2009 to early spring 2010 editing took place on a prototype DVD collection, Good Morning Álamos. 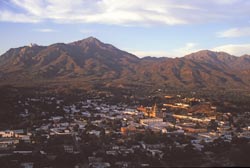 Starting In March these Álamos videos were re-edited and have been posted on the newly created Vimeo Álamos site. In middle of January 2011 work began on the Daily Journal. Everyday since a photo has been posted with a short commentary. These efforts will assist script writing for the next stage of editing and post-production of Good Morning Álamos. Scanning and archiving slides continued. Between 2012 and 2016 the Álamos history timeline on the Álamos site grew with data. Also added to the Anders’ cadre of Álamos websites was an Álamos youtube channel.
In the fall of 2016 Anders began to plan the 2017 Álamos Sonic Expedition by sending emails to his Álamos contact list and asking. “what would you do if you saw Anders walking down an Álamos street?” Many quick responses offered lodging and logistical support. Anders arrived in Álamos a little bit before noon on February 23, 2017. It was warm and the streets busy with activity. Another adventure in Álamos media gathering was beginning.

These words are from the Good Morning Álamos DVD cover, “Tucked away in a picturesque valley settled into Sierra Madre foothills is an enchanted Shangri-La that sings of other eras. Past, present and future come together effortlessly as one walks down hand-swept cobblestone streets beneath eternal blue sky…”