The Year that Didn’t Need to Happen
2001 was a year for history. There was before 2001 and after 2001. In the Upper Klamath Basin, specifically the Klamath Reclamation Project stretching 24 miles from Klamath Falls, Oregon to Tulelake California, water that had 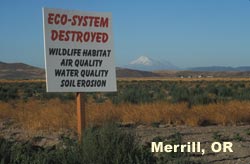 been delivered for nearly 90 years to irrigate agricultural lands and sustain wildlife refuges was in danger of being shut-off. Two endangered fish, the coho salmon and sucker fish, had protected water requirements along with a new flow study, the Hardy report, that required much higher flows from the Upper Klamath Basin down the Klamath River. There were demands on the Federal Government to do something. And there was only one thing that the Government could do and that was the Bureau of Reclamation to shut-off, for the first time, the Klamath Reclamation Project.

Would it become “Us” against “Them”?
I was amazed in September 2000 that the Government had been miss-measuring Upper Klamath Lake by a foot. Also, in early February 2001, 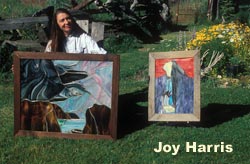 Joy Harris, a landscape architect and stain-glass artist, delivered 4 wheel barrels of topsoil from the Sprague River for a garden project I had in Klamath Falls, Oregon. As a casual aside she mentioned that I should be careful because there were many pine seedlings in the soil. She added that she thought this may be a sign of a long-term drought because the seedlings usually went off in the fall. All of the government forecasts were for a normal rain-snow year. I was beginning to wonder who was calling the shots? Who knew what, when and why? A large regional Federal footprint included Forest Service, Bureau of Land Management, Fish and Wildlife, Environmental Protection Agency, Reclamation, Parks Service, amongst others, along with all those receiving in the mail federal checks for one reason or another. There was agriculture and a ESA Spotted Owl crippled logging industry. The private sector, State-County-City employees and the Klamath Tribe made up the rest of the region’s population in an “us” against “them” landscape. What was to become of the Upper Klamath Basin?

This began as a story about water.
Since the summer of 1995 I had spent part of a year documenting waters surrounding Upper Klamath Lake from Crater Lake to the Lava Beds south of the Oregon border. 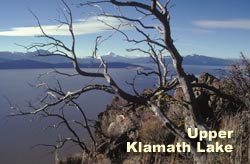 During this time I had visited several local water district meetings to understand how water was being managed by humans. These were mainly administrative affairs, confirmation of the board of directors and yearly fees. When introducing myself to these groups I stated that I was making a documentary about water. After listening to Joy Harris’ climate predictions I decided to closely follow the water political and management issues in the Upper Klamath Basin, the lands surrounding Upper Klamath Lake and what was once Tule and Lower Klamath Lake – both drained by the Klamath Reclamation Project.

All quiet on the western front.
2001 started with the first endangered species to be successfully cloned, Noah, a Guar – Indian bison, on January 8th. Wikipedia, the free encyclopedia, went on line January 15th. 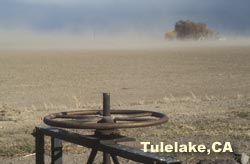 England and the U.S. bombs Iraq air defense works on January 16th. G.W. Bush became the 43rd President of the United States on January 20th. The United Kingdom’s foot and mouth cattle crisis become public February 20th. On March 23 the Russian space station Mir fell into the Pacific Ocean near Fiji. The Bush administration on March 28th withdrew support for the 1997 Kyoto Protocol’s attempt to reduce ogreenhouse gases. April 1, 2001, Netherlands becomes the first country in the world since Nero’s rein to legalize same-sex marriage. New elements were being added to the original Disneyland in Anaheim, California. The Baltimore Ravens beat the New York Giants 34-7 in the 2001 Superbowl. This was a period of relatively low-impact news. The USA was not at war.

War drums on the horizon.
On a local level, I attended a demonstration outside the Bureau of Reclamation’s offices near the Klamath Falls airport on March 9th 2001. Hundreds of farmers and supporters had gathered for speakers and a parade of tractors, mobile farm equipment and support vehicles. The mode was hope, anger, shock, disbelief and fear. 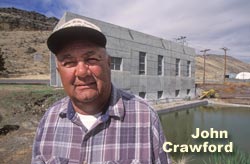 John Crawford, a Tulelake farmer, spoke at length on what may be coming. I was struck by his statement that there wasn’t enough water to satisfy the federal requirements for coho salmon and the Upper Klamath Lake sucker fish, let alone agriculture. His words echoed in my head as I videotaped the long somber procession of trucks and tractors that left the meeting and headed to Klamath Falls. The shut-off of water to the Klamath Reclamation Project was officially announced on April 6th, 2001. I am that night sleep was difficult for hundreds, if not thousands, of people. I spent my evening cleaning equipment and charging batteries.

May 7th, 2001: The Bucket Brigade .
To see more about the Media coverage.
For more background on Anders’ Klamath River Watershed project