A Community Decides to Break a Law.

There must be something they can do.
The Bucket Brigade Protest on May 7, 2001 began as a bright-blue morning with puffy Simpson-like clouds, unseasonably warm with temperatures rising. This was in stark contrast to the cold-dark-overcast Tractor Rally held two months earlier. The Tractor Rally was an agricultural 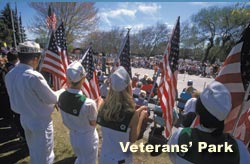 community event, few outside of local farmers were in attendance. There was a sense of reason and hope that the Bureau of Reclamation would release water in 2001 along with fear and anger that water would not be released. Several knew water would be shut-off. The Tractor Rally was a family coming to grieve, support and prepare for the known and unknown consequences. My video of the tractor rally passed around local agricultural interests. It helped them focus on what was happening and also encouraged them to embrace digital media as a voice. Agricultural was fully committed to bringing attention to the Klamath Reclamation project’s farmers plight. with a public relations campaign. They would learn how as they did it. Basin Fertilizer and Chemicals on Malone Road, one mile north of the California border in Merrill, Oregon, became a meeting place for the many who wanted to do something: the Bucket Brigade, coming two months after the official water-shutoff was one of the early concepts developed and implemented by this group of individuals who were facing the water crisis together as a community team.

They came together and did what they could.
I had been filming the waters, flora and fauna of the Upper Klamath Basin, off and on, since the summer of 1995. Agricultural lands were hard to gain access to. There was a distrust, which I understood and respected, of my cameras that in some cases took me years to overcome and gain access to private lands. Merrill-Malin, Oregon 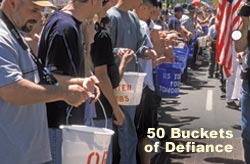 and Tulelake, California were the areas I had photographed and researched the least. I saw an opportunity to document these communities, and farming, if I shared my water issues footage with agricultural interests. Chris Moudry, co-owner of Basin Fertilizer, became my contact with Agriculture. Days before the Bucket Brigade I filmed a pre-production meeting of the organizers and newly retained PR consultant Tupper Hull at Veteran’s Park in downtown Klamath Falls on the shores of Lake Euwana. For the actual event Chris recruited a young man to assist me with carrying cameras and being a second set of hands and feet. Another volunteer operated my audio tape recorder that had a direct feed from Troy’s, the soundman, public address system mixing board. May 7th, 2001 began a long day’s journey into a crazy house of human-nature mirrors.

We were proud to be Americans.
The Los Angeles Times published a piece about the Klamath Reclamation Project water shut-off on Sunday May 6, 2001. The Farmer’s PR group was in full swing. Regional and local media were covering the story. Groups from throughout the northwest had come to Klamath Falls to be part of the Bucket Brigade. 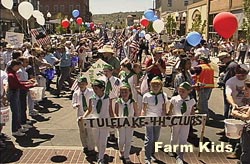 The concept was simple. 50 buckets of water would be drawn from Lake Ewauna and handed person to person some 16 blocks and then deposited into the Bureau of Reclamation’s “A” canal on the other side of town. This symbolic community act was an illegal diversion of “federal” mandated water. A series of speakers started the day at lake Ewauna arguing against the Logic of the water shut-off. Master of Ceremonies Mike Byrnes announced the police estimated there were 18,000 people in the park and along Main Street. After several more speakers, including Oregon Senator Gordon Smith, the procession of buckets solemnly began led by 4 girls from the Tulelake 4H club and a local radio station’s donated sound truck. Lee Greenwood’s God Bless America – also know as – I’m Proud to be An American was played repeatedly. Emotional tears flowed freely as the water buckets passed enroute to the “A” canal.

Digital footprints left behind in time.
After the water was dumped into the “A” canal a crowd packed a nearby high school’s grandstands and listened to another set of speakers including Oregon Congressmen Greg Walden. The day came to an end with my final shot of tired people walking home in small 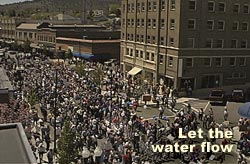 groups, or alone, atop the banks of an empty canal as the sun was setting. It was covered by local and regional TV, radio and press along with Fox national correspondent William La Jeunesee. A digital footprint was created. Soon my edited sequences of the Tractor Rally, Bucket Brigade and interviews set up by Moudry were being sent off as media packages. The Portland PBS affiliate produced a segment for the PBS national News Hour. David Brancaccio called and requested footage to use in a California Connected episode he was producing. A 60 minute show was aired repeatedly on fledging RFTV . Chris Moudry also contacted the publishers of Lee Greenwood’s God Bless America and received the rights to use the song in Bucket Brigade video clips.

Aftermath and epilogue.
Later, in 2003 and 2008, I did a series of interviews with farming families and individuals involved with the 2001 events. One of many questions I asked everyone was “were you at the Bucket Brigade?” If so, “what were you thinking as you drove to the event, how did you feel at the Bucket Brigade and what do you now remember about that day?” The day was still emotional for many of the interviewees. Footage requests have continued through the years including a film project in 2011.
Anders is currently editing a film segment on the people and the events of May 7th, 2001.

To see more about the Media coverage.
To see more leading up to 2001 events.
For more background on Anders’ Klamath River Watershed project